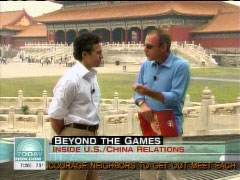 In a pre-taped segment, delivered from the Forbidden City in Beijing, NBC's Matt Lauer pointed out a poll that showed the Chinese are happier than Americans and repeated his line that protestors could be seen as "party crashers," on Tuesday's "Today" show.

During an interview with NBC News China analyst, Joshua Cooper Ramo, Lauer made the following observation:

LAUER: There's a recent poll that said some very high percentage of the people in China are happy with their lot in life. Something around 80 percent. You compare that to polls in the United States that say only about 25 percent of Americans are, what's the root of their happiness here?

Then a little later in the segment the "Today" co-host, repeating an earlier worry he made on Monday's program, declared the average Chinese citizen would disapprove of any protests:

LAUER: And the average citizen who may, in principle, agree with the ideology of a protest, might that person, at this particular time say, "No you're not gonna spoil our party, it's inappropriate?"

Incidentally, before the Lauer segment Andrea Mitchell reported, from Washington, on many of China's problems including its treatment of dissidents, its pollution and the government's support of the regimes of Myanmar, Iran and the Sudan.

In China's favor, Mitchell did claim that Beijing "buckled to pressure, ending censorship of the Internet for journalists." However that censorship of journalists seemed to be in effect, when Lauer delivered the following mostly positive and probably minder-approved, August 5, report from the Forbidden City:

MATT LAUER: Joshua Cooper Ramo is an NBC China analyst and a former foreign editor at Time magazine. Joshua good morning to you.

JOSHUA COOPER RAMO: Thanks, pleasure to be here.

LAUER: I want to talk about the people here. There's a recent poll that said some very high percentage of the people in China are happy with their lot in life. Something around 80 percent. You compare that to polls in the United States that say only about 25 percent of Americans are, what's the root of their happiness here?

RAMO: You now Matt I think one of the features of incredible economic growth of the physical transformation of this country in the last 20-25 years has been to give people a real sense of optimism. A sense that things are moving in the right direction. A sense of increasing personal liberty, a sense of increasing opportunity. The flip side of that, by the way, is that the government is very, very concerned when you meet with top leaders here. They're relatively optimistic about the future but it's a cautious optimism.

LAUER: Why don't you look at the last 10 years for me or so, the last decade, and give me a progress report. Where, where has the progress been made here?

RAMO: Well probably the, the most dramatic and obvious progress for everybody has just been the tremendous economic growth. You know you're looking at 10 percent a year economic growth, really since the late 1970s when the process of reform and opening began. Probably the most significant change in the last 10 years though has come with the 17 party Congress, which was in 2002, when we had a new set of leaders come in. And their goal, very much, was to change the economic development of China, away from a model that was focuses on the coasts and heavily resource intensive and very insensitive to the environment to one that is spread out more equally around China and it tries to improve the environment.

LAUER: When, when we, over these next couple of weeks hear criticism leveled at the Chinese government there's a question that's being asked back in the states. How will they react? How might they react to a demonstration, whether it be subtle or dramatic?

RAMO: You know one of the things to understand, when you look at the party here, because the party still really does control the government apparatus is this is not the Soviet Union with some late stage, coma patient Communist Party. They are very aware of all the risks and inside the party there's been a lot of debate about how do you react to protests? There's a camp that says the best thing that could happen would be to let it happen and the world would see that China is tolerant.

LAUER: But is that in their DNA?

RAMO: Well there's another camp inside the party that says it's the best possible moment to crack down hard and show the world how tough China is. And it's not something we'll probably even know the answer to unless and if something happens.

LAUER: And the average citizen who may, in principle, agree with the ideology of a protest, might that person, at this particular time say, "No you're not gonna spoil our party, it's inappropriate?"

RAMO: Yeah and I think it's not just about this time. It's about a very strong sense of Chinese nationhood. You have to remember that this is a place that experience unbelievable social chaos from the time of the Opium Wars in the 1850s until the establishment of modern China in 1949. And then decades of chaos after that. It's left them very sensitive to problems of outside interference and unbelievably reactive when they feel they're insulted.

LAUER: Joshua thanks very much. And I want to tell our viewers that Joshua is gonna be sitting next to me and Bob Costas in the broadcast booth on Friday night. He'll be our analyst for the opening ceremony. And your perspective will be invaluable Joshua. So we look forward to that.

Update (Ken Shepherd | 17:33 EDT): This afternoon on his show on the WOR Radio Network, talk show host and friend of NewsBusters Steve Malzberg not only questioned the validity of a poll done in a Communist country where some may fear that the "wrong" answer could bring severe punishment, but also questioned the numbers Lauer provided to represent satified Americans.