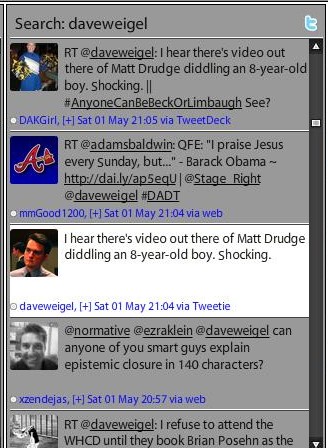 UPDATE: Weigel has officialy responded and claimed it "was a joke about Matt Drudge linking, for more than 24 hours, to a National Enquirer story about President Obama having an affair. "For more details, read after the jump.

Even if it's a joke, it's shocking to have an employee of The Washington Post claiming a prominent conservative had sex with an 8-year-old boy. But that's what new Washington Post "Right Now" blogger Tweeted during Saturday's White House Correspondents' Dinner about The Drudge Report's founder Matt Drudge.

Fairly late in the evening, Weigel wrote this on his Twitter account: "I hear there's video out there of Matt Drudge diddling an 8-year-old boy. Shocking."

The post that followed it was a message to another blogger about what the National Enquirer claimed was an Obama sex scandal, so it appeared to be in that context. At least five people on Twitter repeated Weigel's comment about Drudge. There appeared to be no follow-up comment, explanation or apology.

Weigel, who started his "Right Now" blog at the Post a little more than a month ago, is known for sarcastic and sometimes funny comments on Twitter. Earlier in the evening, he had commented about having too much to drink. "Very cool. I either need to stop drunktweeting or do MUCH MORE drunktweeting." And the rest of his comments during the evening were in a similar sarcastic or goofy vein including photos of MSNBC host Rachel Maddow as a bartended at the dinner and a picture of himself in a tux where he commented, "I am ready to either party or wait your table. Or both!"

I have criticized Weigel before because I feel his column often looks for ways that make conservatives look bad while his opposite number, the Post's Ezra Klein, is an open liberal and spends his time making the left look good.

First Weigel continued to Tweet about this even when one poster challenged him about it. His latest comment: "I said I 'hear' there's a tape. I didn't say there definitely is one! Drudge can clear up the rumor if he likes."

Then he posted a formal response:

Apparently, the Weigel thinks making jokes about child molestation or rape is professional journalism. Weigel's claim is that his original comment about a video showing Matt Drudge having sex with a young boy was a joke. "I hear there's video out there of Matt Drudge diddling an 8-year-old boy. Shocking."

Now Weigel's latest, including attacks on me for pointing out Weigel's mess, even though I gave him the benefit of the doubt and said it might be a joke. He claimed the original post "was a joke about Matt Drudge linking, for more than 24 hours, to a National Enquirer story about President Obama having an affair."

Weigel tried to turn his offensive behavior into a personal attack on me, calling me on Twitter a "humorless little creep." And then detailing a lengthy explanation of why he linked Matt Drudge to molesting a little boy. "Let's just slow this down so Dan can understand." Of course, then again, I wasn't the one making rape jokes.

To quote Weigel: "If Gainor thinks jokes like that about public figures are out of bounds, he's even stupider than I thought." Apparently, Weigel is still learning his new role as someone who works for a company that actually has an image, albeit a lefty one. The question isn't just making inappropriate comments and bashing conservatives, which he does with regularity. The question is one of unprofessional conduct.

But hey, let Weigel speak for himself: http://daveweigel.com/?p=2330

Since Weigel's response also obsessed about my references to time, let's correct one of his misstatements calling me "mid-level Media Research Center staffer Dan Gainor." For the record, that title Vice President usually means more than "mid-level."