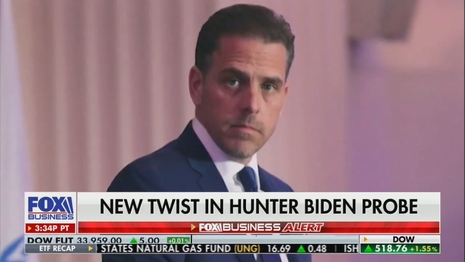 In a story posted Wednesday night, The New York Times finally came around to implicitly admitting to what many knew in 2020 but, like the intrepid New York Post, were censored for saying: The emails on Hunter Biden’s laptop are indeed real. And, worse yet, the specific e-mails that The Times confirmed involved Burisma.

Worse yet for Hunter, it was revealed he took out a loan to pay millions in back taxes while a “broad federal investigation” of his life has expanded, including testimony from the woman who’s alleged he fathered a child with. Of course, this was of no interest to Thursday’s broadcast network morning newscasts on ABC, CBS, and NBC.

The exposure came on the heels of stories from earlier in the week that revealed the State Department would begin handing over any communications involving or referencing Hunter to The Times following a lawsuit over a Freedom of Information Act request.

As for what The Times reported and buried on A-20 of Thursday’s print edition, Katie Benner, Ken Vogel, and Michael Schmidt, Hunter “paid off a significant tax liability, even as a grand jury continued to gather evidence in a wide-ranging examination of his international business dealings.”

In a line that would have drawn screeches from their side in 2020, The Times conceded Hunter’s “professional life has intersected with his father’s public service, including working as a registered lobbyist for domestic interests and, while his father was vice president, pursuing deals and clients in Asia and Europe.”

As a result, they added a “federal grand jury heard testimony in Wilmington, Del., from two witnesses, one of whom was a former employee of Hunter Biden whose lawyer was later subpoenaed for financial records that reflected money Mr. Biden received from” Burisma.

They continued, explaining what’s still unclear and how the First Son has also looked at his dealings involving China and Kazakhstan (click “expand”):

It is not clear whether the criminal probe is focused solely on Hunter Biden, or if he is among a group of individuals and companies being scrutinized. Prosecutors have also asked about potential FARA violations by a Washington consulting firm, Blue Star Strategies, that worked for the Ukrainian energy company in an arrangement that Mr. Biden helped broker, according to documents and the people familiar with the investigation.

Hunter Biden told associates in recent months that he paid the federal taxes that had been the subject of Justice Department scrutiny. He told one associate that the tax liability was more than $1 million, and that he had to take out a loan to pay it off.

Federal tax prosecutors generally fight to keep jurors from knowing whether defendants have paid their back tax bills, arguing that the crime happens when the return is falsely filed or not filed at all[.]

Investigators have examined Mr. Biden’s relationships with interests in Kazakhstan, a Chinese energy conglomerate and Burisma, the Ukrainian energy company, according to people familiar with the investigation.

They said prosecutors had investigated payments and gifts Mr. Biden or his associates had received from foreign interests, including a vehicle paid for using funds from a company associated with a Kazakh oligarch and a diamond from a Chinese energy tycoon.

Only in paragraph 24 online did they get to his e-mails (and, in the two graphs before, allude to his corrupt business partners) and, once there, The Times unpacked Hunter’s attempts to cover his tracks (click “expand”):

People familiar with the investigation said prosecutors had examined emails between Mr. Biden, Mr. Archer and others about Burisma and other foreign business activity. Those emails were obtained by The New York Times from a cache of files that appears to have come from a laptop abandoned by Mr. Biden in a Delaware repair shop. The email and others in the cache were authenticated by people familiar with them and with the investigation.

In some of the emails, Mr. Biden displayed a familiarity with FARA, and a desire to avoid triggering it.

In one email to Mr. Archer in April 2014, Mr. Biden outlined his vision for working with Burisma. In the email, Hunter Biden indicated that the forthcoming announcement of a trip to Ukraine by Vice President Biden — who is referred to in the email as “my guy,” but not by name — should “be characterized as part of our advice and thinking — but what he will say and do is out of our hands.”

The announcement “could be a really good thing or it could end up creating too great an expectation. We need to temper expectations regarding that visit,” Hunter Biden wrote.

Vice President Biden traveled to Kyiv, the Ukrainian capital, about a week after the email.

In the same April 2014 email, Hunter Biden indicated that Burisma’s officials “need to know in no uncertain terms that we will not and cannot intervene directly with domestic policymakers, and that we need to abide by FARA and any other U.S. laws in the strictest sense across the board.”

He suggested enlisting the law firm where he worked at the time, Boies Schiller Flexner, to help Burisma through “direct discussions at state, energy and NSC,” referring to two cabinet departments and the National Security Council at the White House.

The firm “can devise a media plan and arrange for legal protections and mitigate U.S. domestic negative press regarding the current leadership if need be,” Mr. Biden wrote in the email.

Benner, Vogel, and Schmidt cited one other exchange about Burisma officials being at an April 2015 dinner in Washington where the then-Vice President would be, claiming “[i]t is not clear whether [they] attended the dinner, although [Joe Biden] did make an appearance[.]”

Nice the @NYT is catching up. But @kenvogel you missed something important. You write: “It is not clear whether the Burisma executive attended the dinner.” This email from Vadym Pozharskyi thanking Hunter 2 days after the dinner ran on @nypost front page. Denied by Biden campaign https://t.co/O57ScMhO7G pic.twitter.com/7kkbzkWaMW

Speaking of burying information, The Times ended with five paragraphs about Luden Alexis Roberts, a former employee of Hunter, former stripper, alleged baby mama that sued him “for child support and paternity in 2019” and spoke with both prosecutors and the grand jury.

Hours before The Times piece, the Fox Business Network’s Evening Edit covered the news about the FOIA request.

Host Liz MacDonald called it “next level” while Washington Examiner reporter Byron York said the move it was “quite ominous for Hunter Biden” and “show[ed] that press organizations that had not really enthusiastically, shall we say, reported on this, are actually interested” after the Biden camp was the beneficiary of “social media suppression” in 2020.

In contrast, ABC’s Good Morning America spent two minutes and 20 seconds how dangerous and supposedly unsuspecting drawbridges are (which is only news to distracted drivers), CBS Mornings had a brief on a new line of t-shirts made of fabric that monitors you, and NBC’s Today sent Kerry Sanders to party with St. Patrick’s Day revelers.