Of course, the background on alleged 21-year-old suspect Quintez Brown was omitted from the flagship broadcast network morning newscasts with CBS Mornings being the only network to even mention the shooting.

CBS Mornings alluded to the alleged shooting in both of its Eye Openers (which serve as a tease and recap of the previous hour, respectively) and a 34-second brief from co-host Tony Dokoupil in which he told of “a shocking attack” against “a Democratic candidate for mayor” in which he said “a gunman walked into his campaign office and fired at him” but “no one was hurt” as staffers “managed to shut the door and barricade it.”

As for the suspect, Dokoupil explained: “Police arrested Quintez Brown, a local activist, about a half-mile from the scene and he's charged with one count of attempted murder, four counts of endangerment. No motive so far, according to officials.”

Following a “wow” from fill-in co-host Michelle Miller, that was it.

Back in reality, Brown was summarized this way by Andy Ngo:

Quintez Brown is a black nationalist, communist revolutionaire & BLM activist whose social media history shows left-wing conspiratorial rhetoric in regards to race & white supremacy. His crazy ideas were laundered into the mainstream through his role at the @courierjournal. https://t.co/JvETb96tWJ

And in the Courier Journal, reporter Andrew Wolfson revealed in a piece about the incident that Brown’s “a civil rights activist” as well as “a former intern and editorial columnist for The Courier Journal.”

According to a count of Brown’s author page (as of this writing), he penned 25 items with one July 2019 column carrying particular irony: “Kentucky's concealed carry law shows your life doesn't matter to gun-loving Republicans.”

Brown also appeared on MSNBC with Joy Reid during the network’s special coverage of the March for Our Lives, a gun control rally in Washington D.C. that took place on March 24, 2018. 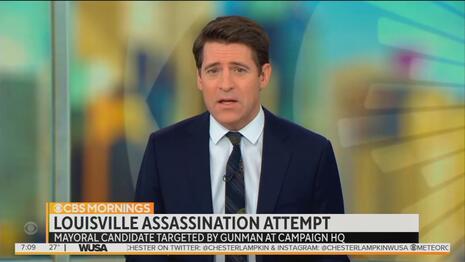 He said that he came to Washington because he wanted to show that gun violence “is not just, you know, a white student issue,” but one that “affects everyone.”

Adding that “gun violence doesn’t just affects schools but...everywhere” and school had become a “war zone,” Brown blamed Republicans for the bloodshed and not “car[ing] about...lives” for failing to pass “commonsense gun reform” that “humans need.”

While ABC’s Good Morning America wasn’t interested (along with NBC’s Today), one of their overnight newscasts mentioned it in America This Morning.

Here was that news brief from co-host Andrew Dymburt (as well as one from Tom Hanson from one of CBS’s overnight shows, CBS Morning News) (click “expand”):

DYMBURT: Police in Louisville are investigating a motive for what's being described as an assassination attempt against a Democrat running for mayor. Craig Greenberg was grazed by a bullet at his campaign office. A suspect is now in custody.

HANSON: And a suspect is in custody in connection with a possible assassination attempt on a Democratic candidate running for mayor of Louisville, Kentucky. Craig Greenberg said he was in his campaign office yesterday with four other people when a man appear and began shooting. He said one bullet grazed his clothing. Nobody was hurt.

GREENBERG: The gunman came to — stood in the doorway and — as he fired the shots, and one of my teammates was standing to the side of the door and was able to get the door slammed and then he and over teammates that were closer to the door threw tables and desk to barricade us in.

HANSON: The 21-year-old Quintez Brown was arrested on several charges, including attempted murder. There is no word on the motive.

Instead of covering something that undoubtedly would receive attention if Brown was a Trump supporter, Good Morning America touted the growing number of spin-offs for Wordle and Today expressed shock over a flock of birds suddenly plunging to the ground in Mexico.

Tuesday’s bias was brought to you by advertisers such as Ensure (on ABC), Progressive (on CBS), and VRBO (on NBC). Follow the links to see their contact information at the MRC’s Conservatives Fight Back page.

To see the relevant CBS transcript from February 15, click “expand.”

UNIDENTIFIED REPORTER: A man was arrested after he allegedly stormed into the office and shot at a democratic mayoral candidate in Louisville, Kentucky.

TONY DOKOUPIL: We go now to Louisville where a shocking attack allegedly happened to a Democratic candidate for mayor. He says a gunman walked into his campaign office and fired at him yesterday. The candidate’s name is Craig Greenberg and he says one of the bullets grazed his sweater. Fortunately no one was hurt. Four colleagues in the office managed to shut the door and barricade it. Police arrested Quintez Brown, a local activist, about a half mile from the scene and he's charged with one count of attempted murder, four counts of endangerment. No motive so far, according to officials.

VLADIMIR DUTHIERS: A gunman in Louisville is in custody accused of trying to murder a Democratic mayoral candidate. Nobody was harmed but the candidate says a bullet grazed his clothes.

CRAIG GREENBERG: I'm fortunate that was the first time that’s happened to me. I certainly hope it's the last.