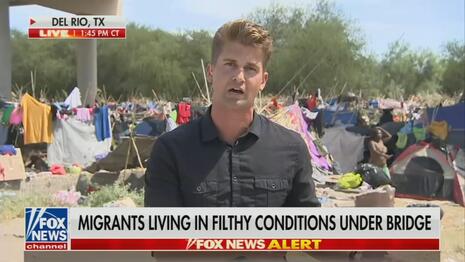 After having carried the first half of Wednesday’s White House press briefing, the Fox News Channel’s America Reports provided a live fact-check of Press Secretary Jen Psaki’s claims about the crisis of Haitian illegal immigrants at the U.S. border via the indefatigable correspondent Bill Melugin, who’s done nothing short of yeoman’s work in covering the crisis. And needless to say, Melugin held nothing back.

Reporting from Del Rio, Texas and next to the camp he’s described for nearly a week as “Third World-like conditions,” Melugin went to work with a claim from Monday’s Psaki Show that Haitian illegal immigrants don’t intend to be in the country very long:

So, look, that was an interesting press conference. And you guys have been talking about Jen — Jen Psaki’s comments that she doesn't believe the migrants down here intend to stay for a long time. That’s news to these folks down here. If they were to actually come down here and talk to them, I think they would realize that they’re not traveling from halfway around the world to go on a little camping trip for a few days under this bridge and then just go back into Mexico. They intend to stay.

Melugin stated what should be obvious, which was that “word...spread” to these Haitians that, “under the Biden administration, if they can step foot on U.S. soil, they will have a chance to be released into the U.S.”

He added that despite Team Biden’s claims otherwise, what’s gone on was what catch and release “look[s] like” with “migrants being dropped off, busloads of them...in Del Rio” and, after being given “food,” “water,” and “supplies,” “they either get put on buses to other cities in the U.S.” or a flight to “wherever they want.”

To back that up, Melugin noted other “journalists have been...seeing Haitians all over their flights” (including, as Melugin cited in other live shots, independent journalist Ali Bradley), which were “in direct contrast to what DHS Secretary Mayorkas said” that migrants shouldn’t come as the border was closed and they’d be deported.

After acknowledging that some single adults were being deported, he moved to the significant difference between being given a notice to report (NTR) and notice to appear (NTA) and how, as per the Border Patrol union, “more than 600,000 illegal immigrants have been released into the country” since President Biden took office (click “expand”):

[M]y border patrol sources here on the ground in Del Rio are telling me, as it stands right now, they are flat out releasing all family units and any women who are claiming they are pregnant. They want to get this camp cleared out as fast as possible. So, what they're doing is they have two options: They can let them go with an NTR — a notice to report — or an NTA — a notice to appear. What’s the difference? A Notice to Report means they’re asking the migrants, “hey please, will you show up to this ICE office in the future within 60 days and report?” An NTA is more strict. An NTA says, “you must show up to this office on this exact date.” Well, my sources here on the ground tell me they’re doing for predominately NTR’s right now. Why? He tells me NTR’s take about 20 minutes or so for a border patrol agent to process while an NTA can intake upwards of an hour. And again, the idea, the optics of this camp are horrible. It's third world-like conditions down here. They want to get it cleared out as fast as possible. You can take a live look at our drone right now and still see the size of this camp.

At Saturday morning, it was about 15,000 in size. It's now down to around 6,000. Again, they are getting as many people out as they can, but again, the administration made it sound like all these people were going to be sent back to Haiti, don't come here because you're not going to get in, you’re not going to get a chance to stay, that is just not true. Under this administration, catch and release has been happening ever since the Biden administration came into office. The National Border Patrol Council — the union representing Border Patrol officers — says more than 600,000 illegal immigrants have been released into the country ever since the Biden administration came into term and this isn't a problem — this isn’t something that just started right now here in Del Rio. Fox News has been at the border all year long. We’ve shown those images in McAllen, Texas of busload after busload after busload of migrants being dropped off at the bus station to be taken wherever they want. We've shown them on the airplanes with their manilla folders, getting to go wherever they want.

Growing visibly upset with the fact that recent record border crossings are “not sustainable,” Melugin turned to Psaki’s other bald-faced lie that Title 42 was being used to keep people from being released (click “expand”):

Now they say their tracking other caravans — 20,000 in Columbia, others gathering in Reynosa, Mexico across from McAllen, it's a problem the administration is going to have to address. And they keep — they keep hiding behind Title 42, saying we're getting rid of people via Title 42. It’s not immigration policy. It’s a public health order. Well, a federal judges just shot down of Title 42 last week, saying the administration can only use it for two more weeks, so Title 42 might be going out the window in the near future. It depends how the administration responds to it if they’re going appeal. But every border agent we talked to on the ground says, if Title 42 were to go away, this surge — this border crisis that we've been experiencing, will absolutely explode. Because what does Title 42 do? It means that — normally, when you deport somebody, you have to go into deportation proceedings, they have to see an immigration judge, they get their chance in court.

Under Title 42, that's not the case. Because of Covid-19, they get put on a bus, they get taken right across the bridge and dropped — dropped back off into Mexico . Once the word gets out the that Title 42 to could go, border agents say expect surge on top of the surge on top of the surge, and things could get much worse in the near future. So, if the ministration is going to continue to use Title 42 as their policy, they may not have that much longer.

Melugin closed by making clear that the failure to solve the border crisis has been “bipartisan” and with what was his most animated remarks about the administration’s decrepit policies:

[T]he situation, as it stands right now, being at the border for months now, it’s just a head scratcher that we — we just keep banging our head against the wall as a country and not changing anything because these poor border agents out here, they deserve better. They're completely overwhelmed. And it's not fair to these migrants either because they're coming here, believing something and — you see the conditions here. It's — it’s not okay for anybody, so something’s got to change. I’ll get off my bully pulpit. I’ll send it back to you guys.

Asked by fill-in co-host Shannon Bream for more about these Haitians, Melugin said “every single Haitian that I've talked to” said they came from Chile.

And worse yet, he said they’ve been “ripp[ing] up IDs, documents and discarded passports” before crossing over because having them would throw a wrench into their plans to apply for asylum from Haiti.

“[T]ypically, U.S. policy for asylum is asylum will be rejected if the government knows that these migrants have settled in another country...[A] lot of these migrants told me they've been living in Chile since 2014, 2016, years,” he added.

And given the lax policies, they recognized now was the time to come and their thoughts were correct as “they know [that], once they cross the river, they can set foot right here in the U.S.,” be handed “a piece of paper and if they want to, they can disappear into the shadows, and a lot of them do.”

Before concluding his live shot, co-host John Roberts joined Melugin in pointing out why it was that Haitians wouldn’t want physical proof that they had some from other, more stable countries (click “expand”):

ROBERTS: So, Bill, on — on that point with all these people that have been in — in places like Brazil or Chile, or this other group that’s in — in Columbia. You know, part of claiming asylum is credible fear. If you've been in Brazil or Chile, which are both modern countries for years, how do you come to the United States and suddenly claim credible fear?

MELUGIN: Well, that's the thing, Chile has one of the strongest economies in all of South America. And look, there are legitimate people claiming asylum in these groups that come over.

MELUGIN: But a large majority of the people I've talked to for the past five months now our economic migrants. When I ask them, “why do you come,” they want a better job. They’re not making enough money down there. They want a better financial situation for their family. They tell me they want to send money back to their family in countries in Central or South America. Those are not grounds for asylum . Do we want to help everybody? Should everybody who wants a better job be let into the country? That’s something politicians are going to have to decide. But American asylum requirements are very strict. They have very specific criteria and you don't have over a million people coming over the border who are going to meet all of that criteria.

If the liberal media wanted genuine pointers on how to fact-check this administration, Melugin and Fox White House correspondent Peter Doocy would be the perfect people to start with.

To see the relevant transcript from FNC’s America Reports on September 22, click here.