UPDATE, 5:31 p.m. Eastern: Following hours of blowback on Thursday, MSNBC analyst Malcolm Nance deleted an incendiary tweet that brushed aside and excused the deadly Kabul airport bombings that’s killed at least 12 U.S. soldiers, releasing a thread in which he “deeply regret[s] how callous it now sounds.”

As per the tweets below, he admitted that he “should’ve waited” since he “posted before there were any serious casualties reported” and that he’s “heartsick about the lives we have already lost and those we lost today.” 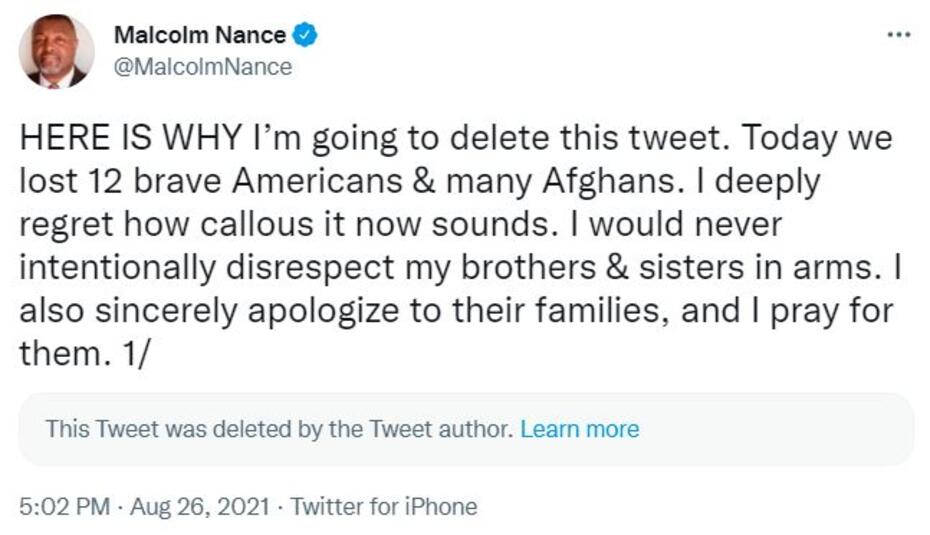 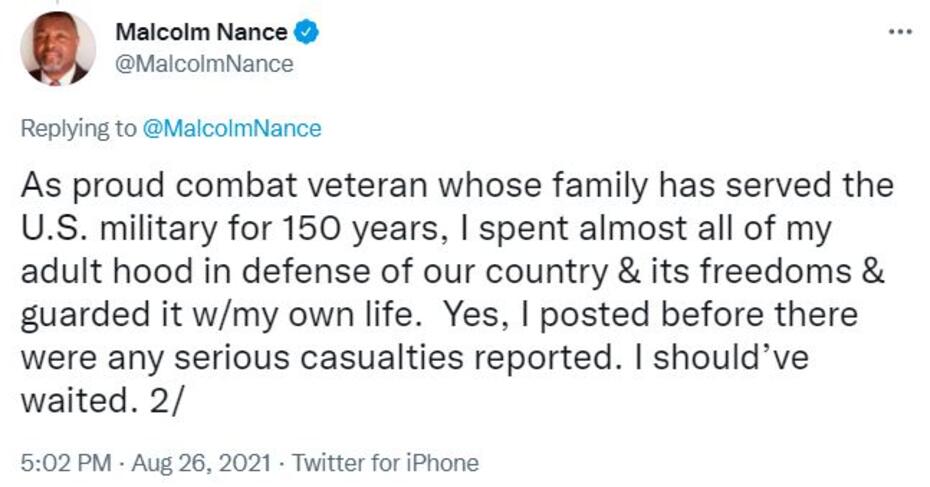 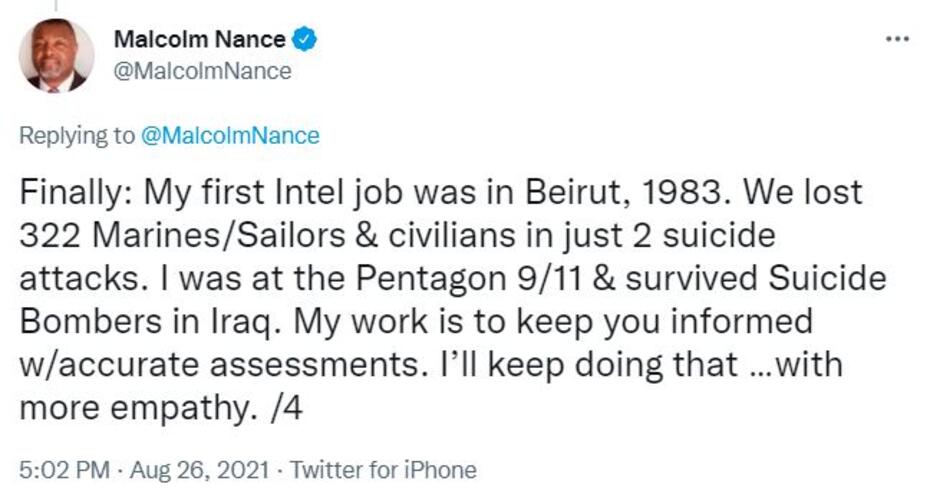 UPDATE, 2:31 p.m. Eastern: In response to the massive blowback for dismissing the deadly Kabul airport explosions that has killed at least 10 U.S. servicemembers (as of this update), Nance said “the reality of this is terrible,” but otherwise made all about himself.

Nance also made sure to play the race card, boiling down the flurry of tweets criticizing him to a racist mob hurling the n-word:

On Thursday morning and early afternoon, MSNBC analyst Malcolm Nance went to work as a Biden administration ally and keyboard warrior in downplaying and excusing the deadly bombings near the Kabul airport, tweeting people need to “#DealWithIt” that people died because it is, after all, Afghanistan.

Less than an hour after Nance’s tweet, The Wall Street Journal reported (and was later confirmed by other outlets) that four U.S. Marines were killed in the attacks.

But according to Nance, people die all the time and especially in Afghanistan, so we might as well get over. Imagine being so depraved to have tweeted what he did.

Obviously, Nance was slammed on Twitter, drawing condemnations from across the spectrum (which even included Parker Malloy). As always, our friends at Twitchy have an excellent selection of the blowback here.

Our own Nick Fondacaro hit the nail on the head when he tweeted: “What else can we expect from the man who nominated Trump Tower Instanbul for an ISIS suicide bomb.”

Fondacaro also pointed out in a subsequent tweet that Nance’s disregard for American lives squares with what CNN analyst Phil Mudd told Chris Cuomo last tweet: “Between Malcolm here and Phil Mudd arguing against sending troops out to rescue Americans, I’m under the impression the intelligence community is full of callous monsters.”

Of course, he had plenty of help. Galaxy brain take queen Jennifer Rubin of The Washington Post retweeted it:

After offering an initial tweet offering prayers “to brave Americans” in harm’s way, Rubin went right to work on behalf of White House Chief of Staff Ron Klain to brush off the attacks.

Rubin tweeted one minute after that take that it’s “[v]ery cavalier to insist Americans stay forever there” and, four minutes later, she shared an Ezra Klein column and pulled out an excerpt to voice agreement. 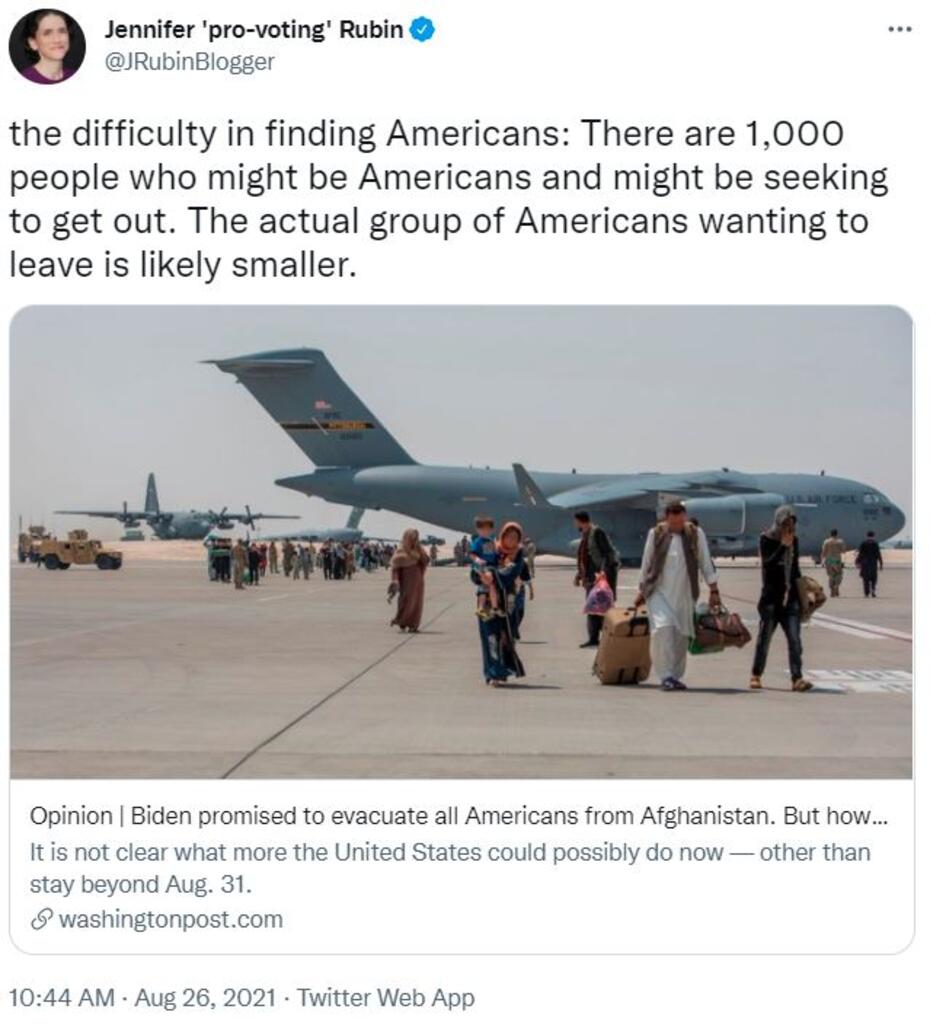 Rubin also made the bombing all about....Donald Trump:

Possessing zero shame, Rubin then spent six tweets sharing a new column of hers that wasn’t about the bombings or the dead and injured. Nope, the depraved-hearted columnist was after the real story of the last few weeks: “Let’s see if we have the GOP’s 2022 message straight.”

Rubin’s lede showed how her heart would make the Grinch’s look gargantuan: “Republicans have latched on to a series of both foreign and domestic policies that will set the stage for their 2022 campaigns. Weirdly, their positions turn out to be starkly at odds with a majority of voters.”

Only after the six tweets about the midterms did Rubin express her condolences: “My heart is breaking for the Americans who put their lives on the line to rescue Americans and 100,000+ Afghans.”

This went on, so to see her full timeline, go here.