Lincoln Project 2.0? MSNBC Cozies Up to Another Group of Fox-Hating Grifters 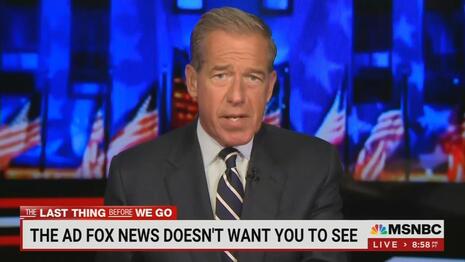 Late Monday on MSNBC, Lyin’ Brian Williams ended The 11th Hour by huffing about a supposed injustice carried out against the “ardently anti-Trump” “liberal political action committee” called MeidasTouch by the supposedly enemies of the people in Fox News.

Their crime? Fox had reportedly denied an ad meant to further enrich the group with sweet, sweet Resistance dollars that masqueraded as a serious, sober video about the January 6 attack on the Capitol.

As we’ll learn, even the far-left Rolling Stone saw through the smokescreen and diagnosed them as grifters desperate and thirsty for more division and hatred from the Trump era. And when challenged, MeidasTouch brutally harassed them and even threatened legal action.

In other words, it was the kind of behavior that they had claimed they abhorred about Team Trump. Or, to be even more blunt, think of it as behavior from prepubescent Mean Girls dressed up as a homily from the Pope.

Where have we seen this before? Well, we did with the Lincoln Project, a liberal group that MSNBC was completely in bed with as they employed numerous current and former Lincoln Project officials, keeping them on like wallpaper. It continued even after they were exposed as frauds and a front for co-founder John Weaver’s sexual affinity for underage boys.

But back to MeidasTouch, Lyin’ Brian even read aloud their tweet before playing the video:

“We made a $184,854 TV buy with this ad on Fox News this week. Fox News just denied airing our ad. Retweet and get it out in every corner of the country,” they say. Well, we have a pretty good reach too. So we`ve chosen to air it tonight. While you watch ask yourself what isn`t factual about it, which people in it aren`t real. It`s about the attempt to overturn our election the insurrection of one six, and the story is told by those in the fight.

If it was meant to inform, they would have done that. But note how in tweets like this one (and others) that they shamelessly ask for donations. Disagree with them? Well, then you’re the enemy.

With ads like this, it’s easy to see why Fox News turned them down. And any idea that this was so Fox News could perpetually avoid covering January 6 would be a complete farce. Do yourselves a favor and Google “January 6” and “FoxNews.com.” 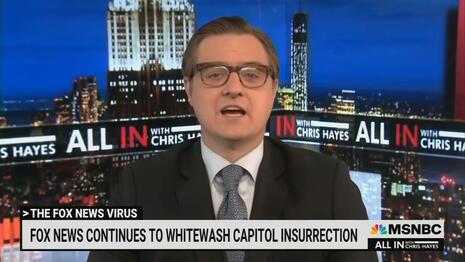 Fast-forward to Friday and MeidasTouch was still pretending to lick its wounds with the only cure being dollars: “Fox News denied our TV ad buy which is going to make the buy stronger than ever. Keep retweeting and chip in here to expand our efforts in June.”

Unsurprisingly, MeidasTouch’s whining had one big issue as, according to a Fox spokesperson who spoke to our friends at The Federalist, they claimed Fox had previously aired a spot when they’ve actually repeated turn them down. Ouch.

For Rolling Stone, anti-Trump author Seth Hettena penned an exhaustive breakdown on April 8 in which he found a rotting car that wouldn’t pass inspection (click “expand”):

Founded by three brothers, the group says it has generated more than a billion views on social media, mocking and humiliating Trump and his enablers….All this exposure translated into more than $5 million in contributions from #Resistance donors desperate to oust Trump and his Republican collaborators.

But the full story of MeidasTouch is more complicated. The group spent more than $1 million on an advertising strategy that it calls revolutionary but campaign veterans and independent experts say is nonsensical and a more effective tool for fundraising than for helping Democrats win elections. And despite its promised transparency, MeidasTouch’s financial structure makes a dollar-for-dollar accounting of its spending [.]

MeidasTouch got its start when the Meiselas brothers — Ben, Brett, and Jordan — found themselves stuck indoors watching Trump’s coronavirus press conferences in early 2020 and decided to turn their frustrations into action. Brett Meiselas began producing videos that rapidly gained MeidasTouch an online following with the anti-Trump resistance. In mid-May, the brothers registered MeidasTouch as a Super PAC and started positioning themselves as more than just Twitter darlings. “We thought that being a digital company was great, but it has limitations,” Ben Meiselas told Rolling Stone in an initial interview in December. “The world doesn’t live on Twitter.”

Meidas argues its ads are special because they’re backed by a massive social media footprint and generated follow-up coverage. But according to David Shor, an influential Democratic data analyst, “The only people who engage with anti-Trump ads are liberals.” Moreover, when Priorities USA, a liberal Super PAC, studied whether Twitter virality could be used to measure how effective an ad would be at persuading swing-state voters, it found it wouldn’t work. “The better the ad did on Twitter, the less it persuaded battleground-state voters,” Nick Ahamed, Priorities’ analytics director, told the Daily Beast in December. “Our takeaway is that we, as political operatives or people online on Twitter a lot, aren’t necessarily a good judge of what is persuasive.”

MeidasTouch said the CNN ad on Georgia’s election ran nationally, meaning that in 49 of the 50 states where it was shown, viewers were eligible to donate to the PAC but not eligible to vote in the race. One political consultant says the ad had more impact on MeidasTouch’s brand-building and fundraising than on helping Democrats take back the Senate.

“Transparency is in our DNA,” Brett Meiselas tweeted in March.

On its website, MeidasTouch says it is “staffed solely” by the Meiselas brothers “with the primary goals of protecting American democracy, defeating Trumpism, and holding Republicans accountable.” And they were going to meet those lofty goals by building a massive online grassroots movement. “We just built up trust and we’re very transparent about who we are,” Brett Meiselas told Rolling Stone. “And we’re able to connect to people on a personal level because they knew who was actually behind it.” MeidasTouch says it holds regular, nothing-off-limits meetings with donors to take their feedback and questions on spending.

At the heart of MeidasTouch’s opaque finances is an arrangement with a Virginia company called Prestige WW Inc. — a reference to the Will Ferrell comedy Step Brothers. Prestige received more than half a million dollars of Meidas’ donor money, FEC filings show. Prestige is run by Adam Parkhomenko, Meidas’ political strategist and a former aide to Hillary Clinton who later did political work for Michael Avenatti, a onetime anti-Trump hero who was convicted last year of trying to extort $20 million from Nike. (One of Ben Meiselas’ law partners, who was a witness to the events at the center of the extortion scheme, was subpoenaed in Avenatti’s criminal case in Manhattan, and Ben Meiselas is listed as an interested party in the case, as is Nike. According to Meiselas, he was listed as a result of being a managing partner in his firm at the time of the subpoena to his law partner. Rolling Stone is not aware of any facts suggesting that Nike, Meiselas, or his partner were implicated in any of the alleged wrongdoing.)

While Parkhomenko frequently promoted MeidasTouch on social media, his work for the Super PAC was not made clear until Rolling Stone started asking questions. Prestige WW has no public-facing website. Its owner could only be identified through a search of Virginia state corporate filings. Unlike MeidasTouch, Parkhomenko’s Prestige WW, as a private entity, isn’t required to disclose its spending.

Rolling Stone found no suggestion that any of the brothers are getting rich off of the PAC. Indeed, Ben Meiselas often points out that he works for free for MeidasTouch. However, in the course of reporting, Rolling Stone learned that Prestige has an unusual financial relationship with Brett Meiselas.

In December, Brett said he was being paid for his work producing videos for the Super PAC and later volunteered that the payments were coming through Prestige. Brett, who holds legal authority for MeidasTouch as its treasurer, is being paid as a consultant to his own Super PAC’s consultant — an arrangement that Noti says flies in the face of transparency requirements mandated by federal law.

“That’s not OK,” says Noti. “If the PAC is paying the company just as a pass-through for the money to get to its treasurer or to some fundraising company or whatever, what they need to be disclosing are the ultimate payments to those recipients. And there are rules on the books that require that. The FEC has been derelict in enforcing them because the FEC is derelict in enforcing everything. But there are laws on the books that say you can’t do that.”

MeidasTouch says the arrangement gave Brett the option of securing health care because he gave up his career to work full time for the Super PAC. MeidasTouch explains it hired Parkhomenko to take care of, among other things, the administrative operations of a rapidly expanding Super PAC. “Prestige WW allowed MT to integrate its own infrastructure and resources within Prestige to keep costs extremely low,” MeidasTouch wrote in a response to Rolling Stone’s inquiries. The group says its total payments to Prestige of nearly $550,000 represent an “all-in” cost of operation and covers MeidasTouch’s compliance and health care costs. MeidasTouch says it hired an outside lawyer with FEC expertise to ensure “full compliance with its obligations and disclosures.”

When Rolling Stone scrutinized MeidasTouch about its business, its founders threatened to sue over a story that had not yet been published. A ceaseless barrage of misinformation followed, with MeidasTouch rallying its legions of social media followers to join the campaign.

Meidas attacked and insulted the reporter, calling him a “coward” for declining to go on its podcast prepublication, as well as accusing him of being “slime,” a “tabloid hack,” and one of Trump’s “puppets.” (Editor’s note: Hettena is the author of a book titled Trump/Russia: A Definitive History.)

The Meiselas brothers said they were the ones being harassed, and MeidasTouch accused Rolling Stone of attempting “to damage the relationships that power our operation,” and harm them financially when it reported on their business relationships. “We will not be threatened by these mob-style tactics and will continue to keep you up-to-date,” the group tweeted.

The group told supporters that the reporting on MeidasTouch was an assault on them. “The MeidasMighty is a movement. You attack the movement, you attack us all. There is not a more enthusiastic and passionate force in politics today in America than the Mighty,” Ben Meiselas tweeted April 1st.

MeidasTouch’s founders claimed that the magazine was out to get them and that its corporate ownership was using Rolling Stone to push a pro-Trump agenda and attack Trump’s critics. Rolling Stone has written hundreds of articles holding Trump to account for his failures, and in October, its editorial staff endorsed Joe Biden. (Nobody outside Rolling Stone’s editorial process had any knowledge of this story before MeidasTouch made legal threats about it.)

And Meidas told its followers that to help defend against these attacks, it needed their support in campaign dollars. “We will not be bullied,” it tweeted on March 30th with a donation link. “Chip in $3.50 now to keep us going.”

To summarize, you dare to suggest they’re wrong or you don’t share the same policy views and they’ll send a torrent of Resistance accounts to make your life miserable. In other words, they’re schoolyard bullies who get sugar highs off of a social media that’s toxic for our collective mental health.