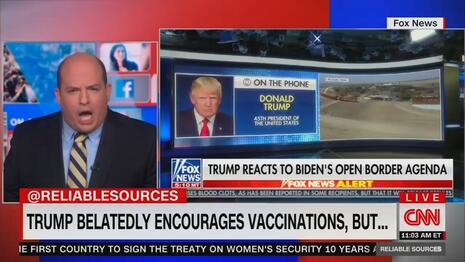 Showing just how far CNN has fallen as they continue to struggle with symptoms of Trump withdrawal, Reliable Sources and host Brian Stelter suffered their worst rating of the year on Sunday as Nielsen Media Research showed a scant 936,000 total viewers subjected themselves to his hour of hate against Fox News and conservative media.

Worse yet, CNN’s ratings overall plummeted to their worst week of 2021. The Washington Post’s Paul Farhi dug into the Nielsen ratings on Monday and found CNN had hemorrhaged “45 percent of its prime-time audience in the past five weeks” with MSNBC down “26 percent in the same period” and the Fox News Channel only off by six percent.

For Stelter, March 21 number was his lowest since September 27, 2020 when 891,000 poor souls tuned in to hear Stelter demand the co-chair of the Commission on Presidential Debates ruthlessly pile-drive President Trump into the ground with help from Trump hater and Lincoln Project helper Molly Jong-Fast and showboater Brian Karem.

Like the rest of the acts in the Jeffrey Zucker-led circus, both numbers were well off a high of 2.674 million total viewers (and 629,000 in the demo) for January 10's show, just four days after the insurrection and attack on the U.S. Capitol. But after just over two million for the following Sunday (January 10), its been a precipitous drop.

On this past Sunday, Stelter’s show was more of the same, spewing hate in his never-ending quest to send Fox News employees to the unemployment rolls. It included an opening commentary lashing out at Tucker Carlson as the latest CNN-wide boogeyman who threatens equality, harmony, peace, and whatever else CNN believes is necessary for a safe and prosperous country.

During said screed, Stelter declared: “Bottom line here, you are what you watch and it could make you sick.”

Trust us, Brian. The feeling is mutual.