As part of a continued shuffling of its show line-up, the Fox News Channel announced on Wednesday that The Greg Gutfeld Show would move from a Saturday night show to weekday evenings at 11:00 p.m. Eastern and shift the Shannon Bream-led Fox News @ Night to midnight Eastern.

And on perhaps an equally-important note, a Fox press release made clear that Gutfeld would remain a co-host of FNC’s hit show at 5:00 p.m. Eastern, The Five.

The knives came out immediately as CNN’s Reliable Sources host Brian Stelter took a personal dig at Bream that was roundly derided as demeaning and sexist if the networks were reversed: 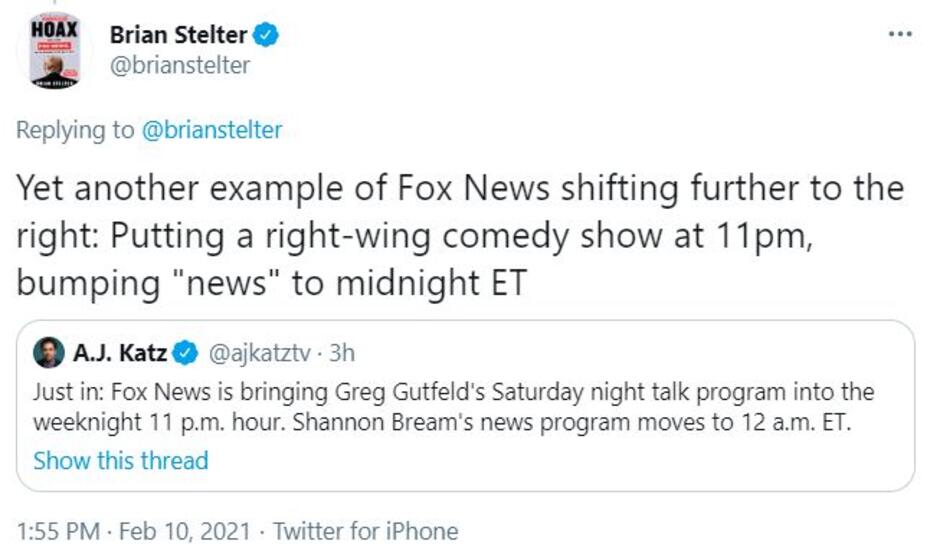 Announcing the move, the release noted that the changes would be implemented “in the second quarter of 2021,” making for an increase of “live and original programming on FNC to 21 per weekday,” which would be far and above competitors on CNN and MSNBC.

As of now, CNN’s weekday live programming equates to roughly 20 hours and 19 hours on MSNBC.

The release went onto cite the fact that The Greg Gutfeld Show “was the most-watched weekend show in the key younger demo in all of cable news” in 2020 and “surpassed various late-night programs airing on broadcast in total viewers, including ABC’s Jimmy Kimmel Live! and NBC’s The Tonight Show.”

For his part, Gutfeld said the weekday move “feels like the perfect next step following the amazing success of the weekend show, which is due in large part to a great staff and a management that lets the show follow its own unique path.”

As for filling Gutfeld’s weekend slot, the press release said “[a] replacement primetime weekend program....will be announced at a later date.”

To see some of Gutfel’s best moments that we’ve chronicled at NewsBusters, go here.