Between Monday night and early Tuesday morning, CNN political commentator Joe Lockhart and MSNBC/NBC legal analyst Glenn Kirschner rhetorically molded and mounted on their heads matching tin-foil hats, insisting that the Fox News Channel and President Donald Trump should face “criminal” and “serious liability” for misinforming the public on the deadly nature of the coronavirus. In the latter’s case, he compared the President to murderers in Washington D.C. he threw in prison.

As a reminder, Lockhart was a Clinton White House Press Secretary while Kirschner was a longtime federal prosecutor and Army JAG officer. And now both offer takes that belong on a liberal equivalent of InfoWars. My how the mighty fall.

Lockhart went off the diving board first on Monday night, speaking with classic CNN-like hatred for FNC: 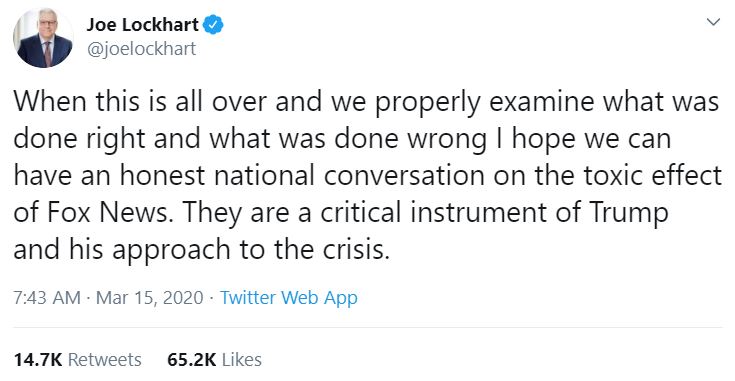 Three tweets later, Lockhart suggested that hosts Sean Hannity, Laura Ingraham, and Jesse Watters don’t care about you, the American people. No, he ghoulishly asserted their coverage and tone on the coronavirus “was driven by Fox legal who anticipated massive legal liability if they continued to peddle false information.”

The next morning was when Kirschner joined in. Commenting on the first tweet of a seven-tweet thread, Lockhart stated that he had “[p]osted last night on the idea that Fox News may face serious liability.”

Oof. Someone alert Lockhart to what the likes of primetime host Tucker Carlson and straight-news reporters like Bret Baier, Shannon Bream, Bill Hemmer, Ed Henry, and Martha MacCallum. He probably views them all the same as the equivalent of news anchors on TASS, but you can’t fix ignorance.

Shifting gears to Kirschner, his thread began before 6:00 a.m. Eastern with this doozy:

Hey All. Can we talk about 1 of the few topics I may actually know too much about: homicide? Specifically, whether Donald Trump may have criminal exposure for some level of negligent homicide or voluntary/involuntary manslaughter for the way he’s mishandled the Coronavirus crisis[.]

Kirschner explained that he spent all but eight years of his 30-year career “as a federal prosecutor handling murder cases in Washington, DC” and specifically was tasked with “overseeing all murder prosecutors,” so he “was always on the lookout for novel ways to apply homicide ... liability in an attempt to appropriately and ethically hold accountable those who were responsible for taking the life of a fellow human being.”

Well, that escalated quickly! So President Trump is like….people who commit murders in D.C.?

Not to belabor the point, but Kirschner continued unspooling this comparison with tweets three through six and suggested the President face charges upon leaving office (click “expand”):

I think it’s fair to observe that there’s nothing more devastating [sic] to a family then losing a loved one to ether violent crime or to ... an illness that could have been prevented or mitigated. I’m trying to assimilate all available evidence (rapidly developing and being reported every day) to fairly assess whether Trump and his administration may have acted/failed to act in a way that could give rise to ... homicide liability. This is not an easy question.

Further, whereas the evidence is clear that Trump has committed multiple criminal offenses both before his tenure as president (campaign finance crimes) & during his time as president (obstruction of justice, bribery/extortion)... homicide liability by his negligent/grossly negligent (and/or possibly intentional) mishandling of the Coronavirus crisis in the US is a more nuanced and thorny issue and deserves careful consideration.

Along with a hashtag “Justice Is Coming” and two to denote a hypothetical “Trump Crimes Commission,” Kirschner concluded: “But the homicide liability issue MUST be addressed because ... ALL criminal charges will have to be investigated and, if the evidence dictates it, prosecuted come Jan. 2021. Stay tuned[.]”