UPDATE, 4:15 p.m. Eastern: At the end of her two-hour-long CNN Newsroom, host Brooke Baldwin finally admitted that she had “an update for you on the breaking news we brought you at the top of the show” because “CNN has learned that attorney Mark Geragos — he’s the unnamed co-conspirator in the criminal complaint against Michael Avenatti.”

She stated in the 45-second brief that Geragos “is a former CNN contributor” and “has not been charged with a crime” but didn’t “immediately respond to CNN’s request for comment.”

UPDATE, 3:51 p.m. Eastern: A CNN spokeswoman sent word to The Contemptor’s Justin Baragona a few moments ago and informed him that “Mark Geragos is no longer CNN contributor.” 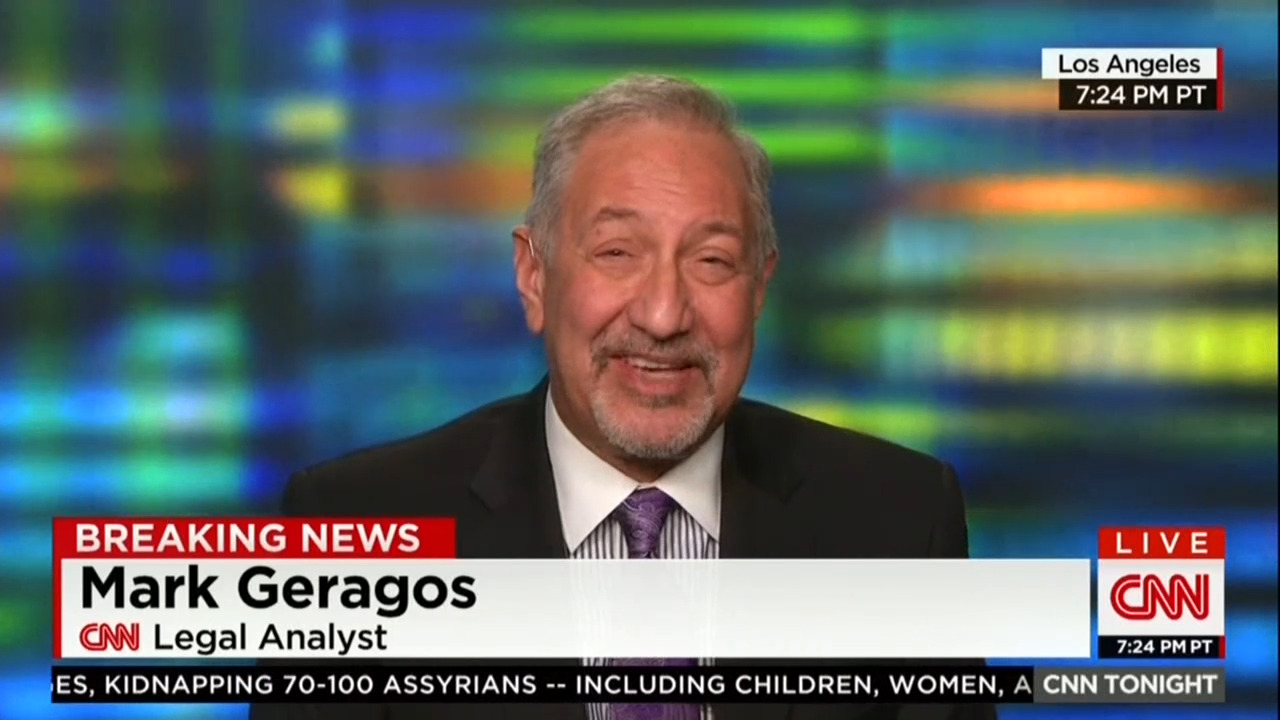 In the span of less than a week, ISIS has been defeated, the President and his team have been cleared by Special Counsel Robert Mueller on collusion with Russia, and liberal media darling Michael Avenatti has been arrested in regards to two federal cases (in Los Angeles and New York) concerning allegations of extortion, fraud, loans, and tax filings. And because of all that, the liberal media are stuck riding the strugglebus.

But as it turns out, the last story got even better and more incredible on Monday afternoon. CNN legal analyst Mark Geragos is alleged to have been one of Avenatti’s co-conspirators in charges brought by the U.S. Attorney’s Office in the Southern District of New York as part of what the Justice Department has stated was an attempt to extort Nike.

The allegations related to Nike arose out of Mr. Avenatti’s representation of a client identified in the complaint as the coach of an amateur men’s basketball program in California, which prosecutors said had a sponsorship agreement with Nike.

The co-conspirator in that matter is attorney Mark Geragos, two people familiar with the matter said. Mr. Geragos couldn’t immediately be reached for comment.

Representatives for Boies Schiller Flexner LLP, a New York law firm that serves as outside counsel for Nike, didn’t immediately respond to requests for comment.

Nike and other apparel companies have in recent years drawn scrutiny for their sponsorship of amateur basketball leagues; last year, a former Adidas AG executive was convicted at trial in Manhattan for steering bribe payments to the families of youth basketball players.

After an initial conversation with Mr. Avenatti about his client earlier this year, Boies Schiller contacted federal prosecutors about what lawyers and Nike viewed as an attempt at extortion, a person familiar with the matter said.

According to the complaint filed in New York, Mr. Avenatti and Mr. Geragos, the alleged co-conspirator, met with lawyers for Nike in New York on March 19 and threatened to release damaging information unless the company agreed to pay the two lawyers millions of dollars and another $1.5 million to the client Avenatti claimed to represent.

Despite CNN’s comment to Baragona that Geragos no longer has his CNN gig, the network has yet to acknowledge his role in the SDNY case against Avenatti (and not the Los Angeles one) as of the time that this post was update (which can be found at the top of the page)..

Just like in those As Seen on TV commercials, wait — there’s more! In addition to these allegations, Geragos represented woke icon Colin Kaepernick and, recently, he’s been serving on the legal team of Jussie Smollett.

Appearing on the March 8 AC360 as Smollett’s lawyer, Geragos decried media coverage of his client as “frankly a media gang bang” and “lynching” “of this guy of unprecedented proportions and that's the reason I got into this.”

“I've never seen a media pendulum swing more quickly and more viciously and rob somebody of their presumption of innocence like this case. It's startling the way people assume that he's guilty,” he added.

So not only has been a dear, dear guest of CNN's landed in legal hot water but it's ensnared one of their own as well? Oh, the irony!

BROOKE BALDWIN: Got an update for you on the breaking news we brought you at the top of the show. CNN has learned that attorney Mark Geragos — he’s the unnamed co-conspirator in the criminal complaint against Michael Avenatti. That case filed in New York today. Just this morning, New York prosecutors announced that they had charged Michael Avenatti had represented adult film star Stormy Daniels in the hush money scandal involving President Trump, that he has now been charged — he, Michael Avenatti, has been charged in this $20 million scheme to extort Nike. Geragos, who is a former CNN contributor, has not been charged with a crime. The Los Angeles-based attorney has represented a number of high-profile clients, including actor Jussie Smollett, most recently. Geragos did not immediately respond to CNN’s request for comment.