Just think, this is who MSNBC considers to be one of its best and brightest Republicans. On Tuesday’s Hardball, political analyst and 2008 McCain campaign manager Steve Schmidt tore into Republican questions about the FISA memo and Strzok-Page texts as “snake oil” “McCarthyism” being “abetted” by the Fox News Channel serving as “state-run TV in an autocratic society.”

Unbelievably, Schmidt’s deranged rants kept host Chris Matthews from seizing the mantle as the nuttiest person on Tuesday’s show. Schmidt began by complaining about “the abnormality of what's happening here” with “this allegation that there's a deep state” and a secret society inside the FBI has nothing to do with asking questions or finding out the truth.

Rather, the MSNBC analyst argued that such claims are “autocratic behavior” meant to degrade the Constitution and “the legitimacy of the presidency.”

“[I]t’s abetted by members of the Republican majority in the Congress and it's abetted by a television network that's increasingly come to resemble state-run TV in an autocratic society,” Schmidt added in a swipe at FNC. As a reminder, this is a man who viciously blamed conservative talk radio host Mark Levin for “the demise of the conservative movement.”

Matthews agreed, ruling that the “smoke screen” concerns about the missing text messages and the FISA Memo distract from the real issues (which is the necessity to find collusion between the Trump campaign and Russia).

Fellow MSNBC analyst Frank Figliuzzi joined in, blasting the stories as part of “a scorched Earth policy” that’s “designed to attack your attackers and it's something that, I think, we've seen Trump do throughout his career professionally and politically.”

As a former intelligence official, Figliuzzi dismissed the notion of a deep state or secret society within the government. Instead, he suggested that there’s one “within the halls of Congress” with Republican Congressman Devin Nunes (Calif.) “waving around a memo that he won't show to anybody.”

Triggered by the mention of Nunes, Matthews attacked him as a “tool” and “the kingpin of this escapade” before playing clips of Republican Congressman John Ratcliffe (Tex.) and Trey Gowdy (S.C.) discussing the underreported stories on FNC’s The Story.

After the clips, Matthews told Schmidt that these stories seems like they’re being peddled by a “snake oil salesman” and questioned Gowdy’s credibility because “he spent one million hours trying to grill Hillary on Benghazi and he got nowhere.”

Schmidt trashed the concerns raised about the missing texts and the FISA memo as “absolutely snake oil.” Further, he cited zero evidence himself in giving a full-throated defense of Strzok and Page, arguing that “[t]here's absolutely zero evidence that any of these FBI agents whose had their private text messages compromised” or that “they misused their badge, their office, their credentials to abuse the President, his family, or any of the President's supporters.”

“Again, this is smear campaign directed at these two FBI agents absent any evidence. It is latter day McCarthyism and it is entirely about what it seems to be about, which is trying to blow smoke around this investigation to obstruct the American people from finding out what went on here at all costs,” he bemoaned.

Here’s the relevant transcript from MSNBC’s Hardball on January 23: 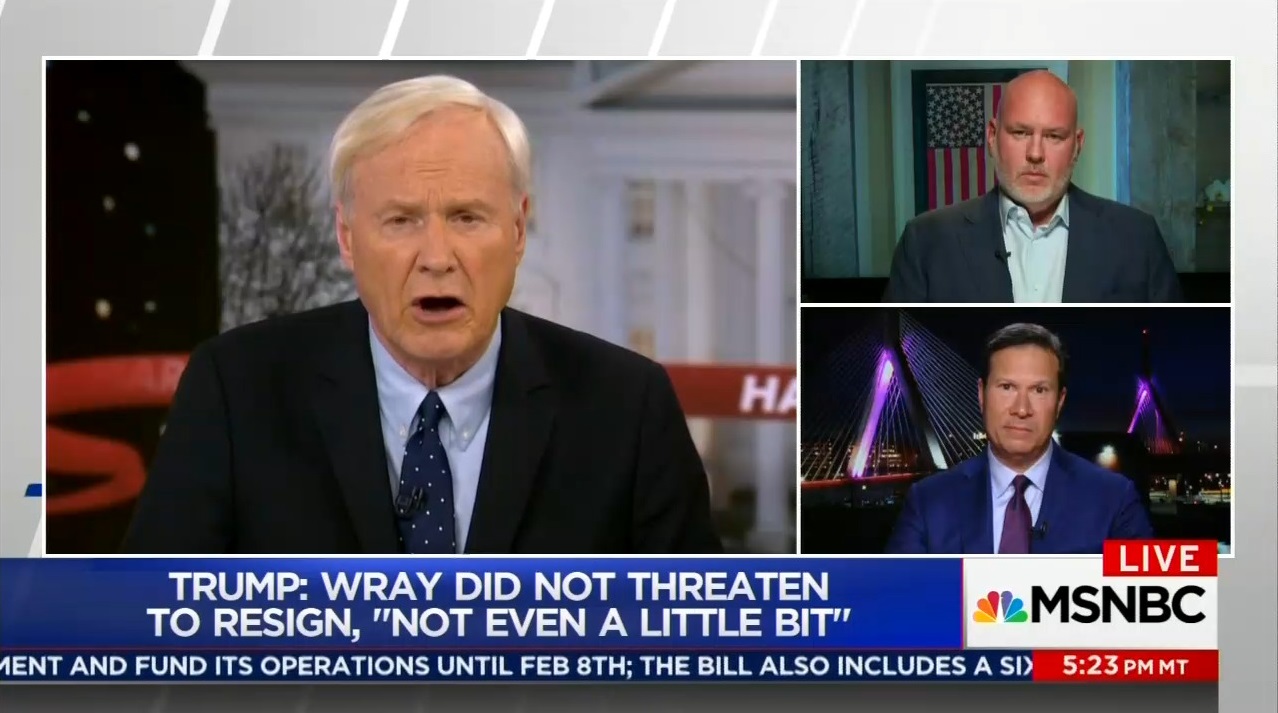 STEVE SCHMIDT: I do think, Chris, it's important to understand that the abnormality of what's happening here, this allegation that there's a deep state, that there's a conspiracy within, that there's a fifth column in the intelligence services, in the law enforcement community, deeply embedded in the American justice system, that is attacking the Constitution, the legitimacy of the presidency, of this President, all of this is the hallmark of autocratic behavior. In every autocratic system that's ever been, there's always been the allegation of conspiracy. It, of course, conveniently, also the scapegoating of an ethnic minority and we can think about that insidious and terrible TV ad that the President's team had up on the air this weekend. So this conspiracy — it’s abetted by members of the Republican majority in the Congress and it's abetted by a television network that's increasingly come to resemble state-run TV in an autocratic society much more than it has been as a conservative television network as we would have recognized it in the past.

CHRIS MATTHEWS: Frank, let me ask you about the long knives, the knifes are out. Going after people like McCabe, trying to make them the bad guy. Tell me about that as a strategy. I think it's a smoke screen and something for people to talk about, whether it's Hillary's e-mails or Bengla — Benghazi over and over again. It seems like if you do say something I billion times, people think it's really important.

FRANK FIGLIUZZI: It's a scorched Earth policy. It’s designed to attack your attackers and it's something that, I think, we've seen Trump do throughout his career professionally and politically. But I want to talk about the deep state because it's answering your question which is first of all in, 25 years as an FBI official, I've never seen anything that looks remotely like some kind of deep state conspiracy. The closest we're coming to and quite frankly. it is within the halls of congress. We have a Congressman Nunes who is waving around a memo that he won't show to anybody. He won't release it. He claims it contains clear evidence that seems to be only in his possession that the FBI exploited or abused the Foreign Surveillance Court in order to get surveillance on Carter Page and my message to the people in Congress holding on to this is look, you've got three options tonight. If you've really got that kind of information, release it. Let the FBI get their act together and correct whatever happened in that FISA affidavit. You can give it to the chief judge of the FISA court. You give it to the duly-appointed Republican director of the FBI, right? Or you could give it to the inspector general of the Department of Justice. But sitting on it shows yourself to be a political animal motivated solely by politics.

MATTHEWS: But the kingpin of this escapade, Mr. Nunes is the guy who notoriously did the midnight ride of Paul Revere, goes down to the EOB, the Executive Office of the President, gets some dirt. Next morning, he shows up at the White House with the dirt as if he discovered something like the Pentagon Papers and made it look like he was really blowing the cover on the bad guys, the Democrats. He is a tool. Anyway, the President this morning renewed another attack on Mueller's probe. He referenced Peter Strzok, the former counter intelligence official who Mueller removed from the investigation last summer. Mueller got rid of him after learning about text messages he exchanged with another FBI employee actually critical of Trump. President tweeted: “In one of the biggest stories in a long time, the FBI now says it is missing five months worth of lovers Strzok-Page texts, perhaps 50,000 [of pages], all in prime time. Wow!” That's Trump building it up. The tweet comes two weeks after Trump accused Strzok, with no evidence, of treason over the texts in which in an interview with The Wall Street Journal. GOP lawmakers say they're evidence of anti-Trump bias at top levels of the FBI. Let’s listen 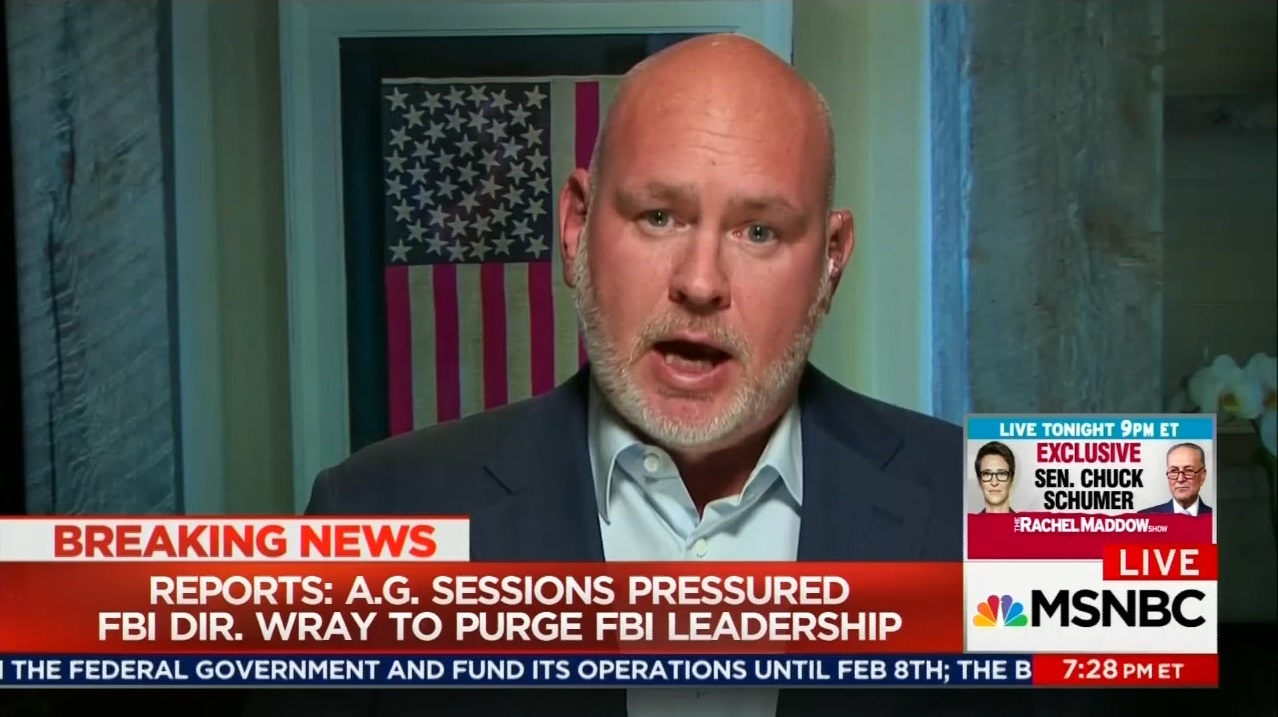 MATTHEWS: You know, Steve, it sounds like snake oil salesman to me and I keep reminding myself that Trey Gowdy — I don’t know if he’s a good guy or bad guy — but he spent one million hours trying to grill Hillary on Benghazi and he got nowhere. Nowhere with it. Your thoughts?

SCHMIDT: Well, it’s absolutely snake oil. There's absolutely zero evidence that any of these FBI agents whose had their private text messages compromise. There's zero evidence that they misused their badge, their office, their credentials to abuse the President, his family, or any of the President's supporters. Again, this is smear campaign directed at these two FBI agents absent any evidence. It is latter day McCarthyism and it is entirely about what it seems to be about, which is trying to blow smoke around this investigation to obstruct the American people from finding out what went on here at all costs.

MATTHEWS: Well, it says to me the more smoke, the closer they're getting to these guys.