Must Watch: Here Were the Big Moments from the Jake Tapper-Leeann Tweeden Interview

Amidst all the coverage Thursday devoted to KABC Radio host Leeann Tweeden’s sexual misconduct claims against Democratic Senator Al Franken (Minn.), the most important segment took place on CNN’s The Lead as Tweeden sat down for an emotional 33-minute-long interview with host Jake Tapper.

Tweeden stood out for both her courage and the passion in denouncing sexual misconduct, but Tapper’s questioning and reassurances that she had “nothing to be embarrassed about” also made for both compelling and necessary television.

Tapper started by giving Tweeden time to describe what she recalled about her 2006 USO tour in the Middle East with Franken and then about the initial shock upon seeing a photo of Franken groping her:

TAPPER: You received a CD of pictures from the photographer, and this was there. This was obviously taken when you were sleeping, and what was your reaction? Obviously, you didn't find it funny. I don't know anybody over the age of nine that might find it funny, but what did you think?

TWEEDEN: I mean, I saw it and, you know, knowing how I felt about him, I was angry because in my mind, he was doing that to — that was like his parting gift, right? Like, ha! She's going to see that after we're all gone and that's like, I gotcha, you know? Ha, ha! That's going to be the last thing she sees and, you know, I got the last laugh.

Tweeden added that she’s “been angry about it, Jake, for over 10 years” and she’s “held inside — my circle of friends and my husband have known how I felt about it for so long and, you know, I wanted to come out with it 10 years ago, and, you know, it wasn't the right time and, you know, I don't want anything.”

She stated that she was driven to come out after Democratic Congresswoman Jackie Speier (Calif.) appeared on her radio show to talk about her own sexual assault experience and even more so because Speier’s story was strikingly similar to hers. Tweeden continued:

I said, you know what? That's going to make me talk and maybe if Al Franken did this to somebody else, or if somebody else has a story and they see me talking about it because, look, I was nervous to come out about it. This doesn't make me feel good. Everybody goes oh, you're so strong, you're going to feel so great talking about it. I still have a knot in my stomach. This isn't — you know, this isn't like some like, oh, yes, I'm going to do it and feel great about it[.]

Tapper stepped in, telling her that this is a “difficult” thing “to do.” Next, he asked Tweeden why she thought it was “important for people to hear” her story. 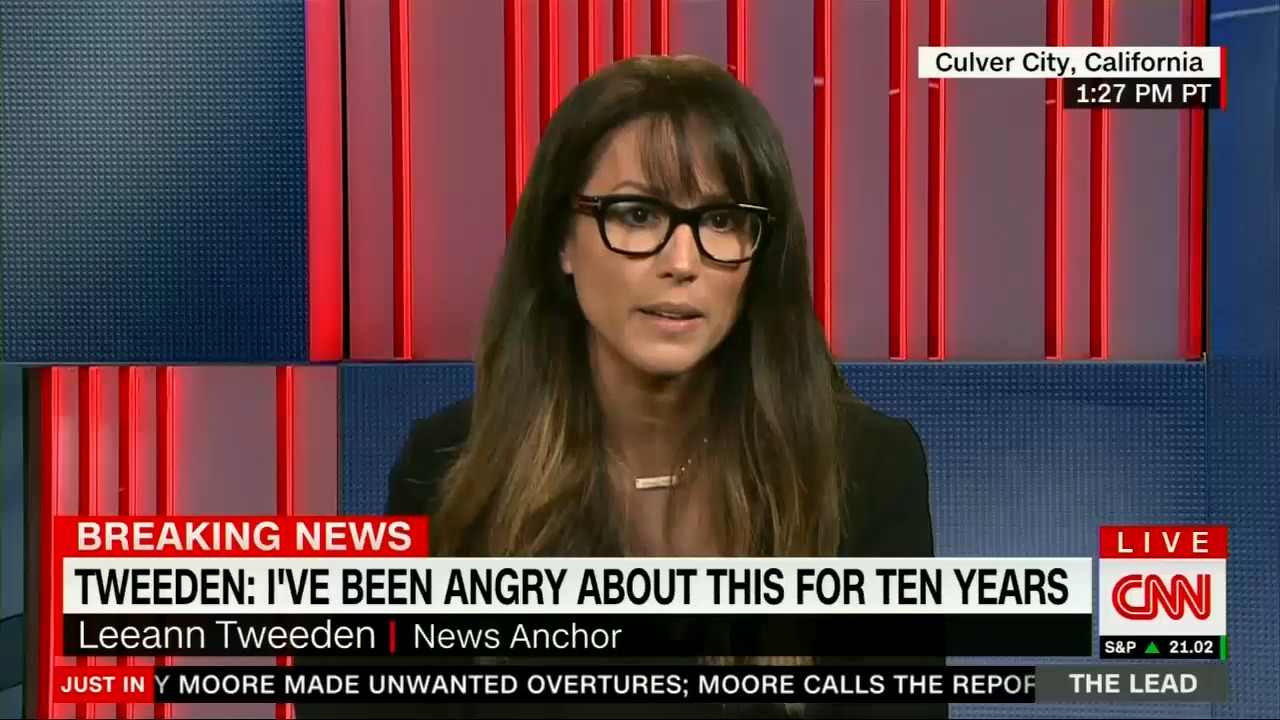 Heartbreakingly, Tweeden replied that this whole thing has been “humiliating” (to which Tapper advised her to say off Twitter):

On the question of whether Tweeden accepts Franken’s apology, she stated that she did, even though the first one “was very short and very brief” as if “a staffer put that out hastily.” Nonetheless, she determined that he “seem[ed] heartfelt and I believe it and I believe him.”

Tweeden repeatedly turned the discussion away from herself to the broader issue. In one such instance, she observed that “[p]eople need to take a long, hard look at the culture that has been happening since, you know, men and women have walked the Earth and I hope it's changing, and I hope it will change because it's going to take all of us.”

A few moments later, Tapper asked if she would “testify before the Senate Ethics Committee” and Tweeden revealed that she would “[i]f they asked me to.” Again showing grace and humility, Tweeden opined that she’s “not asking” for Franken to lose his Senate seat because “that’s not why I came out with my story.”

“It was wrong, and I think everybody needs to take a good, hard look. And I think he came from a place of honesty there. And I think that's really where change is going to be driven from. Not from a — not from the victims coming out and talking about it, I think it's going to come from the people who maybe do the abusing that don't even realize they're doing the abusing because it's so a part of the culture,” Tweeden argued.

Next triggered what would start the most emotional parts of the interview. Tweeden began elaborating on how she’s been feeling when she started talking about her husband [emphasis mine]: 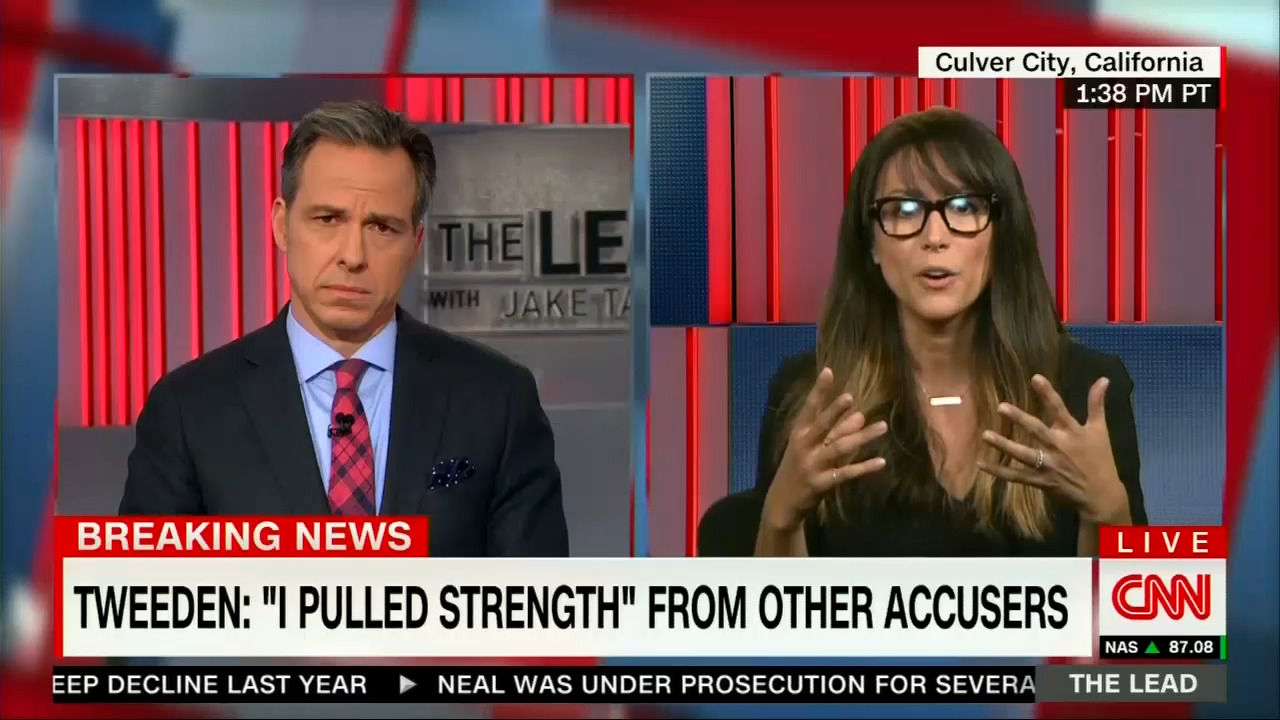 Look, this morning, right before I talked about it on our radio show, I was terrified, you know? I told my husband right before I came to do your show, I'm sitting in the car and I'm like, there was a moment this morning, all of the sudden I tried to go out and go to the bathroom and there were all kinds of TV cameras in the hallway, I had no idea, Jake, honestly, I had no idea what it was going to turn into. I thought maybe a camera was going to show up and then all of the sudden, the hallway was blocked and I kind of like — I need to go to the bathroom and my husband texted me, how are you holding up?” And I literally just locked myself in the bathroom for a minute and I wanted to start crying. It was just sort of like overwhelming emotion, you know, and I even had Lauren, one of the girls that came out about Harvey Weinstein, who’s a friend of ours and I've known her for a long time and she texted me last night she knew I was going to talk about it this morning, and she said: “You're going to feel better. You know, once it comes out, you're going to feel better.” I haven't gotten to that point yet, I'll be honest, I still sort of have that knot in my stomach and, you know, I don't feel like yay, it feels great coming out and talking about it. I mean, I still feel, you know, kind of sick about it. It's not a feel-good thing. I still feel sort of embarrassed about it. It’s — you know — it’s embarrassing.

Tapper decided to continue asking how Tweeden was feeling and the subject of her two children came up. Not surprisingly, Tweeden started crying:

TAPPER: How are you holding up? You have a loving husband. You have a support network there. Are you doing okay?

TWEEDEN: I just want to go home and — I have a two-year-old and a four-year-old, and I just want to hug my babies and my husband. You know, it’s just been — that's all. You know, I've been up since 2:00 in the morning, California time, I haven't eaten anything. I have like cotton mouth. I don't know if you could tell. I feel like my teeth are sticking to my gums, you know, I'm okay, I'm holding up. You know, I just — it's been nonstop. That's all. I'm okay. Thank you. I'm alright.

The CNN host told a teary-eyed Tweeden that, truthfully, “[t]he world that you're making for your children, for your two-year-old and four-year-old you realize that you are making it better for them.”

Tweeden revealed that she has both a boy and a girl, so Tapper noted that “both of them need to be impacted by this”:

TWEEDEN: I have a boy and a girl.

TAPPER: Okay, well, but both of them need to be impacted by this, right? Not just the girl.

TWEEDEN: I — you know, you always — I don't want to be cliche, but you talk about leaving the world a better place for your kids, you know — [CRYING] sorry.

TAPPER: Nothing to be sorry about.

TWEEDEN: I didn't think I was going to do that, but you know, you do. You want to leave, you know — you try to set examples for your children, right? You want to leave the world a better place. You try to — you want to set examples and you want the world to be better for your kids. You want to leave it better than what you had it And it's like you know, I've had so many of my girlfriends text me. I mean, my phone died already twice today because people have been texting and calling and they're like, you know, stay stron,g because you're doing something that is going to make the world better for your daughter. You know and maybe I am. You know. I didn't look at it that way, but maybe I am And if I am, okay. I'll take it. 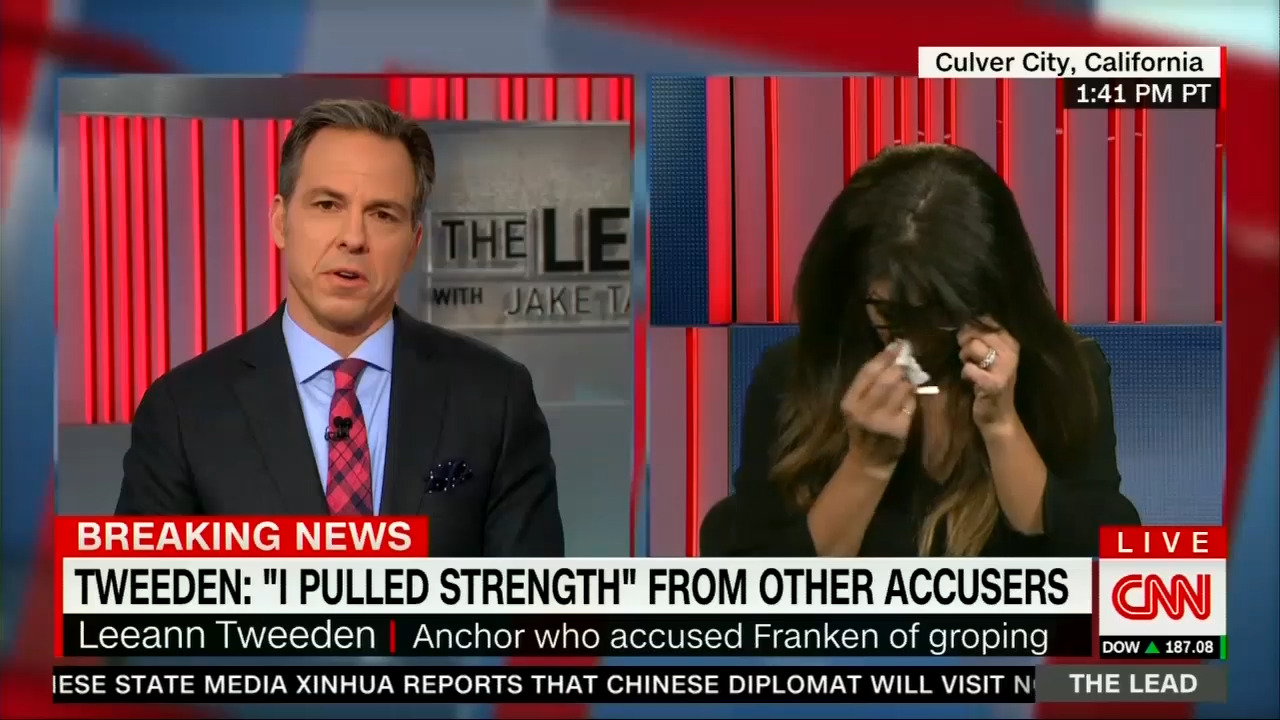 TAPPER: You are. But of course you are. But it's not just for your daughter. You're doing it for your son too. Right?

TAPPER: Because he doesn't — you don't want him to grow up and either misbehave or, you know, have women friends or family members who are affected that way because obviously what you're doing is making the world a better place because you're bringing awareness in a very public and I know you don't feel it, but very brave way. You said something earlier that surprised me. You didn't know how much this was going to — how big a deal this was going to be. You thought there might be one camera. You didn't know it was going to be such a huge story of interest to so many people. Why?

TWEEDEN: Well, I mean, I knew it would be a story because it deals with Senator Franken. I didn't know that it would be like this. You know. I mean — I guess, I mean, I guess it's like trying to describe the Grand Canyon to somebody and then seeing it with your own eyes, I guess maybe it's just a little bit different in perspective but, you know, but I just — it's been a whirlwind. It's been nonstop.

After starting at the 4:18 p.m. Eastern mark, the interview ended just past 4:51 p.m. Eastern on a hopeful note: 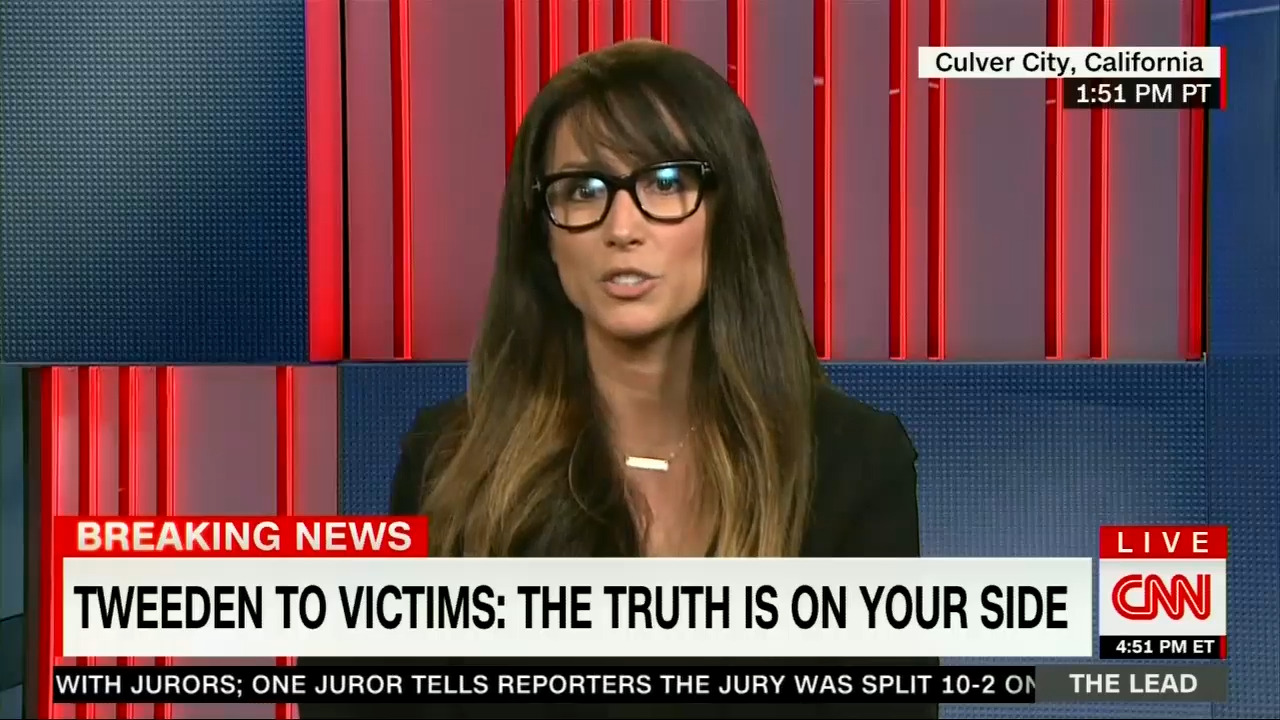 TWEEDEN: Change is never easy. You know, change is — change tough, but if you want to be on the right side of history and you want to make change, you know, you're going to have to do some walking and believe — believe in that and do it, you know?

TAPPER: Well, you're making change, Leeann Tweeden. Thank you so much. We're honored you told your story to us.

TAPPER: Talk to you soon.