‘Do You Want Me to Ask the Questions?’ CNN’s Cuomo, Conway Throw Down Over Comey Firing

You knew this was coming. In light of James Comey being fired early Tuesday night as FBI Director by President Trump, the knives were out on CNN Wednesday morning with New Day co-host Chris Cuomo interrogating, interrupting, and generally losing his mind while going after White House Counselor Kellyanne Conway.

I won’t belabor you, the readers, with the full 19-minute interview, but there two stretches that were worth unpacking.

Early on in the interview, Cuomo pushed the notion that Comey was fired over the ongoing Trump-Russia investigations. When he told Conway that “it seems very, very connected,” Conway shot back that “[t]here is so much conjecture here” that she need some time to “unpack them one at a time.”

At the 7:41 a.m. Eastern mark, the next five minutes were as tense as any previous Cuomo-Conway bout. Conway simply pointed out that Democratic Senator Chris Murphy (Conn.) stated on Monday’s Morning Joe that he didn’t see any evidence of Russian collusion. 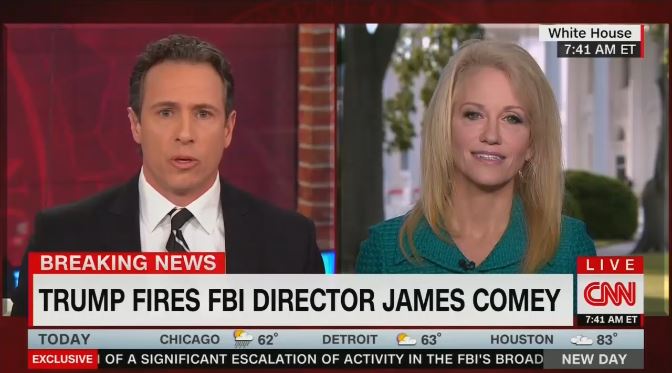 Naturally, the pompous Cuomo wasn’t happy, didn’t believe her, and dismissed it as a “talking point”:

CONWAY: You've got Democrats saying that they don't see any evidence of Russia collusion.

CUOMO: Kellyannye, look, I get the talking point on this, but let's being very clear.

CUOMO: Everybody — everybody who knows — that's what you want it to be. I get that.

Conway shot back that Cuomo’s hoping the Russia collusion is “real” and the brother of New York’s far-left governor asserted that “what I want is the truth” and “[t]hat's all we should all want here.”

“And the idea that you should know the fruit of the investigation these many months this is naive and deceptive. People who have been around these investigations will tell you they take time. On the Senate and House side say they take time. You’ve been misrepresenting the White House,” he added.

Seeing as how Conway must have triggered him, Cuomo spent the next few moments yelling:

What James Clapper said when he said he had seen no collusion proof, that’s accurate. But he also said it's because he didn't know anything about the investigation. Comey had been quiet about it. He wasn't privy to the record. He doesn't know the facts. See, that’s very different. You don't like that part because you want, as the President says, for this to be a hoax. I get it. And that is why Comey being ousted just when that is heating up, not back when he started his tenure, he didn't need anybody to tell him that Comey had been divisive within the agency. He knew all of that. 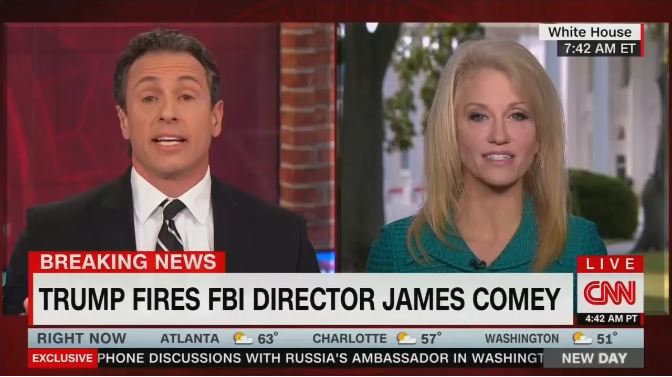 CONWAY: Chris, do you want me to ask the questions? Because you're giving all the answers.

CUOMO: Kellyanne, I’ve got to check what you're saying. I’ve got to provide the context for it.

CONWAY: No, you're using words.

CUOMO: You're creating an image that doesn't reveal itself in fact.

CONWAY: Let me know when I can answer.

CUOMO: Knock yourself out.

“Well, I'll knock this out of the park by telling you that I'm sure it will go viral now that you used the words naive and deceptive. People think you use those words about me, although you were talking about a state of mind — I know that’s the new thing is to try to go viral. But those of us who do want the truth, okay,” Conway stated.

Cuomo changed topics to the timing of the ouster and wondered why Trump didn’t make the move in January. Conway then exposed the blatant media bias on display here:

CUOMO: Why didn't he do it in January?

CUOMO: No, that looks more likely now. Back then, it would have been on the heals of his dissatisfaction about the Clinton situation.

CONWAY: No it doesn’t. No, look, the media don’t like surprises. The media don't like surprises. They don't like being caught flat footed and I don't know people are so surprised when Donald Trump who is not part of the swamp who is a non-politician, who has made — taken decisive actions his entire life, been a disrupter his entire life, when he comes to Washington, does the same and people express shock and awe.

Cuomo also touched on the issue of when/how, as per Trump’s letter to Comey, that Comey himself had informed the President that he wasn’t being investigated. 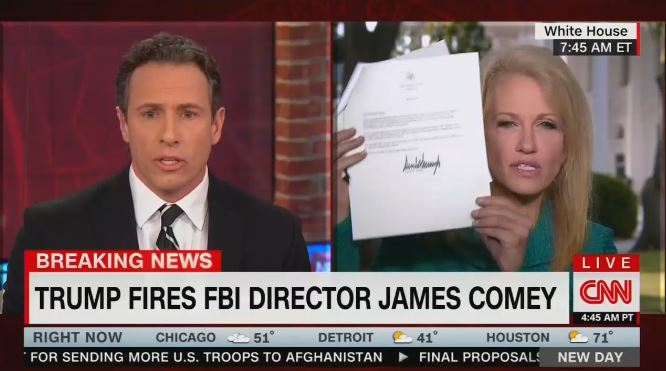 The White House adviser claimed that the letter “doesn’t say that” and this set off more verbal grenades being lobbed:

CONWAY: It says while I appreciate you informing me on three separate occasions that I'm not under investigation. Where are is it that the president asked him that?

CUOMO: How did he find out?

CONWAY: Chris, I'm not going to reveal to you conversations between the president of the United States and the Director of the FBI

CUOMO: It’s so important. It’s important because it’s so wrong, Kellyanne. It is so wrong if that’s — that communication happened.

CONWAY: No, you just made a statement that’s false.

CONWAY: You stated it as a fact. People are going to a news reporter, not an opinion journalist.

CUOMO: Somehow, it was communicated to the President, right?

CONWAY: They’re going to see you as a news reporter.

CUOMO: How — how as that okay?

CONWAY: But where is this? I’m sorry. Where is this in the letter. Let me let your viewers look at it?

The interview then continued on. For the full interview, feel free to check it out here.