Even though Barack Obama left the presidency 99 days ago, MSNBC showed late Thursday night why any criticism of him remains unacceptable. On Thursday’s 11th Hour, fill-in host Joy Reid went ballistic when former George W. Bush chief of staff Andy Card suggested that Obama came into office without a distinct set of beliefs to support his decision-making.

Card appeared as President Trump approaches his 100 days mark with the far-left pundit touting a Politico piece alleging widespread disagreements and “paranoia and insecurity” within the Trump White House staff.

To Reid’s befuddlement, Card calmly pointed out that there’s always been a variety of viewpoints inside presidential administrations and, as long as it doesn’t get in the way of carrying out the President’s agenda, it’s welcome:

There should be a little tension. There should be a little friction. It's the chief of staff's job to make sure the friction doesn't disrupt the responsibilities of the president having to make tough decisions but you don't want a White House that is monolithic in its thinking or monolithic in its advice or counsel to the president that would not be a good thing to happen. And there has been with every president that I'm familiar with tension between staff members and it's something that sometimes is very good and sometimes is not so good but it's always present[.]

Reid attempted to make the matter seem like it was exclusive to only the “Lincolnesque” team of rivals approach, but Card swatted it down. Reid continued bloviating:

Let me finish the question, that it works if you have a president that knows his mind, that has a strong core of beliefs. If he doesn't, then they just sort of get dragged around like a rag doll depending on who has the strongest voice in the room. That's the big criticism of Donald Trump right now.

Card replied that this “was the same criticism that people gave of Barack Obama” and a visibly shocked Reid couldn’t stand idly by as her leader was being critiqued.

“I have never heard that criticism of Barack Obama. Nowhere. Not at all,” she replied to which Card shot back that she wasn’t “listening to the same people I was.” 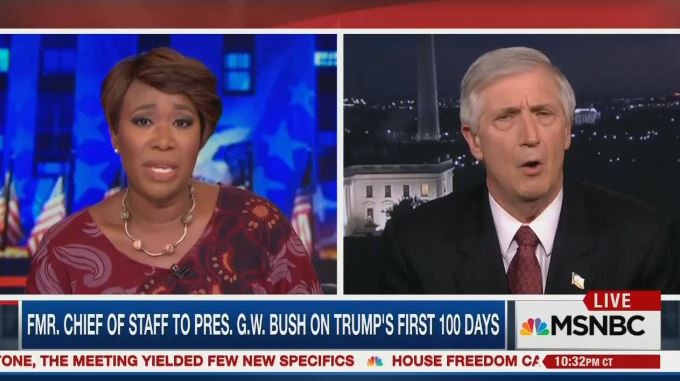 With Card not bowing down to Obama, Reid took this as a green light to lob cheap shots at Bush:

REID: Let me ask you because the same — similar criticism was made of the boss that you worked for George W. Bush, that he came in with no fixed ideology, and so he was easily swayed by the strongest voices in the room —

REID: — namely the neoconservatives, which is why we wound up in Iraq.

REID: Isn't that a fair — isn’t that a logical case to make?

CARD: First of all, your myth — your creation was a myth. That’s not the way it really was and I worked with President Bush. He had strong grounded values and he did not want to go to war.

CARD: No, but he — he knew who the neoconservatives were and he came to office with strong views and an expectation and then he had to deal with the world as it was, now how he wanted it to be and that's what every president has to deal with. That’s a natural reality.

Turning back to the Trump administration, Card ruled that current chief of staff “Reince Priebus has a really tough job and the most important thing is to control the calendar, the clock, the schedule of the President.”

Reid played another card in the liberal playbook, which is attack anyone who they deem to not have had sufficient government experience to hold down a job (i.e. they’re not qualified).

Card noted that he had served three separate president and been “White House deputy chief of staff, Secretary of Transportation, and I had been the director of inter-governmental affairs in the White House” prior to the chief of staff position.

The AM Joy host smirked that, therefore:

Using things called facts and history, Card informed her that one-time Clinton administration chief of staff Mack McLarty “didn't have any government experience at all when he became chief of staff, so people have done it.”

“I happen to think Reince knows Washington pretty well and, remember, this staff did not work together before. It’s a king of collection of players that never played together on the same team. They were put together on a team. They are finding the sea legs,” he added.