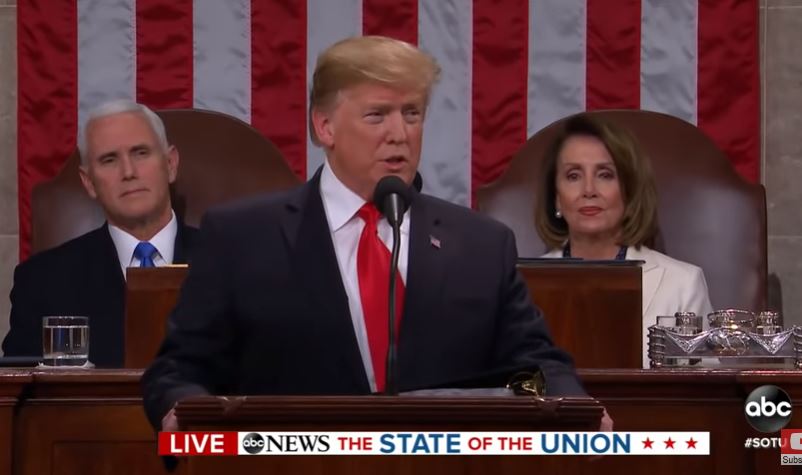 There were lots of lefty angles to the New York Times coverage of President Trump’s well-received State of the Union address on Tuesday night.

President Trump delivered a message of bipartisan unity on Tuesday night in his first address to Congress in the new era of divided government, but signaled that he would continue to wage war for the hard-line immigration policies that have polarized the capital and the nation.

A fact-check article on the speech insisted, against all evidence, that socialism wasn’t the problem in Venezuela’s circle down the drain.

“We condemn the brutality of the Maduro regime, whose socialist policies have turned that nation from being the wealthiest in South America into a state of abject poverty and despair.”

This has become a popular talking point among American conservatives. It is true that the rule of President Nicolás Maduro of Venezuela has brought that country to economic ruin. Inflation is at astronomical rates, and ordinary people are struggling to get basic food and health supplies. Three million citizens have fled. Some of the collapse can be traced to Mr. Maduro’s economic policies, which do fall under the broad label of socialism. But analysts say that corruption, the lack of rule of law and the absence of democracy -- all the hallmarks of a dictatorship -- have played just as big or larger roles.

In other words, socialism.

Then the article attacked Trump for bringing up Ralph Northam’s comments in support of infanticide.

“We had the case of the governor of Virginia where he stated he would execute a baby after birth.”

In an interview last month, Gov. Ralph Northam said that he supported a late-term abortion bill that would loosen restrictions on the procedure, and allow women to consult with a doctor on an abortion up to, but not including, the time of birth.

The governor, a pediatric neurologist, also talked about some of the dangerous medical emergencies that pregnant women could face, such as carrying a nonviable fetus. He said that in such a case, the mother would deliver the infant and then, “the infant would be resuscitated if that’s what the mother and the family desired, and then a discussion would ensue between the physicians and the mother.” While Mr. Northam was talking about an end-of-life care discussion in the case of a child that would not live, Republicans seized on his remarks as evidence that Mr. Northam supported killing babies after their birth.

Which is precisely what Northam said, whether “Republicans seized” on it or not.

Mark Landler’s snotty front-page analysis had roughly an insult per paragraph: “Between the Lines of Bipartisanship: Jabs and the Usual Agenda.”

Mr. Trump briefly acknowledged Nancy Pelosi as “Madam Speaker,” but dispensed with even perfunctory congratulations. He all but ignored the midterm elections that swept the Republican Party out of power in the House. And he vowed that the United States “will never be a socialist country,” likening the progressive Democrats in the chamber to the discredited leader of Venezuela.

Whether it was the border wall, which he insisted would be built; abortion, where he tried to fan conservative anger over comments made by Virginia’s governor; or the investigations of his presidential campaign’s ties to Russia, which he dismissed as “ridiculous” and “partisan,” Mr. Trump chose to appeal to his political base rather than trying to build bridges to Democrats.

In front of him, however, the divide was between the mostly male Republicans, who applauded his red-meat lines, and the Democrats, many of them women, who were clad in white to signify the women’s suffrage movement.

Landler got huffy in defense of thin-skinned Democrats.

Even Mr. Trump’s conciliatory phrases carried a partisan sting. He said, for example, “the agenda I will lay out this evening is not a Republican agenda or a Democrat agenda,” using a shortened form of Democratic that some Republicans favor as a mild slur against the opposing party.

When we asked readers whom they would invite to the address on Tuesday, we heard from many liberals who described their fantasies of inviting guests to rebuke President Trump.

Some people came up repeatedly: Christine Blasey Ford, Colin Kaepernick and immigrants whose families were separated at the border. Readers also chose personal heroes and people whom they had encountered while engaging in political activity.

The paper’s reception of the Democrats went much nicer in general. Besides a supportive piece by Sheryl Gay Stolberg on the Democratic response by failed Georgia gubernatorial candidate Stacey Abrams (called a “rising star” in a photo caption), there was “As Pelosi Applauds Trump, the Internet Sees a Clapback,” by Yonette Joseph, broadcasting liberal online bragging about a photograph of the House Speaker taken by the paper’s own photographer.

In the image, the speaker of the House stands frozen behind President Trump at his State of the Union address on Tuesday night, she a vision in suffragist white, tilted head, pursed lips and outreached arms.

The hands came together in what one Twitter user called a “walrus clap” that resonated around the world.

In the image, captured by Doug Mills of The New York Times, and in other pool video footage, the internet saw acres of shade dispensed by a skilled politician firmly in control, Speaker Nancy Pelosi, and social media users turned Ms. Pelosi’s wordless gesture into a viral meme.

In the face of overwhelming backlash, Karni made a strategic retreat by retweeting pieces sent to her by readers objecting to her characterization.