Did Stephen Colbert Just Have His Worst Week … Ever? 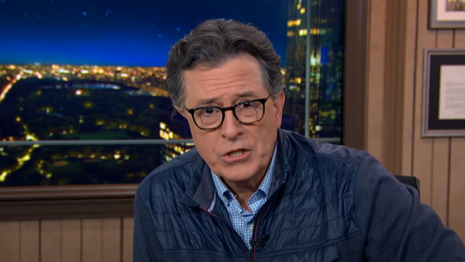 Conservatives can mock Stephen Colbert all they want, but it hardly matters to the progressive comic.

Colbert has been late night’s undisputed leader for the past few years, and there’s been no serious attempt to dethrone him. He doesn’t need conservatives watching his show, apparently. Nor do the right-leaning slings and arrows pierce his ratings shield.

Plus, the media adores him, regurgitating his anti-Trump material and making sure never to fact check his monologues. It’s good to be king … until this week.

The Fox News program Gutfeld!, a cable show with zero A-list stars and a modest budget, just beat Colbert’s “Late Show” in the ratings for the first time.

“Fox News’ “Gutfeld!” outperformed every other late-night show, including Stephen Colbert's "Late Show," in total viewership and the coveted age 25 to 54 demographic on Tuesday evening.”https://t.co/hTPJO05Chm

The fact that it happened while Colbert ran defense for what might be the biggest foreign policy blunder of the modern age may not be coincidental. Chances are more than a few viewers were curious what a right-leaning comic had to say about President Joe Biden’s blunder as opposed to Colbert’s typical fawning.

It’s also the first of several body blows against the far-left propagandist.

This week also saw a damning report saying the Jan. 6 Capitol riots weren’t an insurrection, nor were they egged on by President Donald Trump or any other body.

“Ninety to ninety-five percent of these are one-off cases,” said a former senior law enforcement official with knowledge of the investigation. “Then you have five percent, maybe, of these militia groups that were more closely organized. But there was no grand scheme with Roger Stone and Alex Jones and all of these people to storm the Capitol and take hostages.”

That kind of clarity, from a mainstream news outlet no less, is hard to dismiss.

Colbert even compared those rioters to the Taliban, showing once more how crooked his moral compass has become.

Now, we know that’s a lie – even if Colbert and co. won’t be apologizing for their political barbs to that effect. Telling more insurrection jokes might please Colbert’s hardcore fans moving forward. Others may start tuning him out. The best jokes have a kernel of truth behind them.

Those are two sizable blows to Team Colbert, but the week wasn’t over for him yet.

Colbert, like his fellow hard-left hosts and our corrupt press, has been hammering Trump for allegedly trying to overthrow the U.S. government. 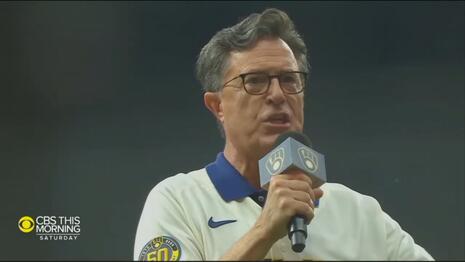 Last year, Colbert’s “Late Show” took some goofy jabs at Milwaukee after the Democratic National Convention moved its gala out of the city and into the cyber realm due to COVID-19. Locals didn’t take kindly to the wisecracks.

So Colbert tried to make amends, in person, during a Brewers home game August 20. It didn’t go well, even if far-Left ESPN spun reality on Colbert’s behalf: "Colbert does best to apologize to Milwaukee."

COLBERT APOLOGIZES, STILL BOOED: Stephen Colbert popped up at the Milwaukee Brewers game Friday night to apologize for poking fun at the city during a segment on The Late Show last year, but fans didn't exactly respond with "Midwest nice." https://t.co/Q8WdhNcBiG

Colbert even joined in on the mascot-style fun, dressing up as a hot dog for the stadium’s Famous Racing Sausages.

He came in last.

Before running in the Famous Sausage Race, @Stephenathome got some race pointers from bench coach Pat Murphy and reliever @bruter24. @ColbertLateShow pic.twitter.com/CEujK3B0d5