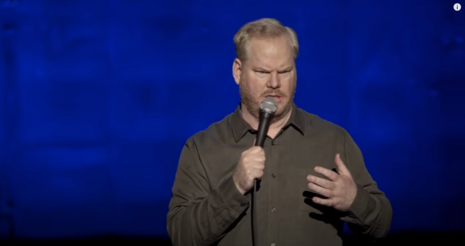 Jim Gaffigan officially joined the Hollywood Resistance just in time for the 2020 elections.

The comic known for his food-based shtick (Hot Pockets!) went on a Twitter rampage earlier this week against President Donald Trump.

On the surface that’s a “dog bites man” story. The vast majority of comedians today lean left, and most air their grievances against President Trump in every venue they can.

Gaffigan isn’t any other comic. He’s one of the funniest stand-ups on the scene today, a comedian who avoids profanity, sex and other mature themes to tickle our funny bones. In recent years he’s thrown a Trump jab or two our way, but the vast majority of his jokes speak to the human condition, not politics.

Will that change after his recent rants?

The Tweets themselves sound like a combination of Cher, Rob Reiner and Judd Apatow. That’s never a healthy cocktail in 2020. And let’s trot out the obligatory, “Gaffigan has the right to Tweet anything he pleases” explainer.

Now, on to the Tweets.

To those of you who think Im destroying my career wake up. if trump gets elected, the economy will never come back.’

Remember everything Trump accuses the Democrats of he’s guilt of. Dont let the socialist name calling distract you from the fact he is a fascist who has no belief in law.

Trump derangement syndrome is part of the con. Wake up. you know Fox News is biased and full of loons. it’s how they gaslight and silence criticism. Do you think any of those congressional republicans really believe in Trump or do they fear him dont want to end up like Flake.

The rage-tweets suggest Gaffigan rarely, if ever, samples news from sober, right-of-center sources. Think The Federalist, The Daily Wire and National Review to name just three (full disclosure: this critic has contributed to all three).

So what’s the point of the Tweets? He mentions those maligning him as a virtue signaler, but there’s some truth here. Some Hollywood stars get political to stay in the industry’s good graces. That’s what Joe Rogan recently suggested, and it certainly passes the smell test.

Gaffigan is a steady draw on the road, no doubt. He recently expanded his career with film roles, appearing in a number of independent features. Given Hollywood’s highly competitive nature, it certainly behooves Gaffigan to repeat his colleagues’ progressive talking points.

More importantly, Gaffigan didn’t try to change any hearts and minds with his Tweets. He didn’t offer up new information or anything approaching a fresh perspective on Trump. He refrained from using ALL CAPS, but in every other way his Tweets reflected the unhinged ravings of his fellow Trump critics.

What Gaffigan did accomplish, though, is to alienate him from a segment of his fan base. He’s not longer a neutral star. He’s part of the Hollywood Resistance.  That means he’s ready and willing to share a new blast of Fake News to support the narrative. 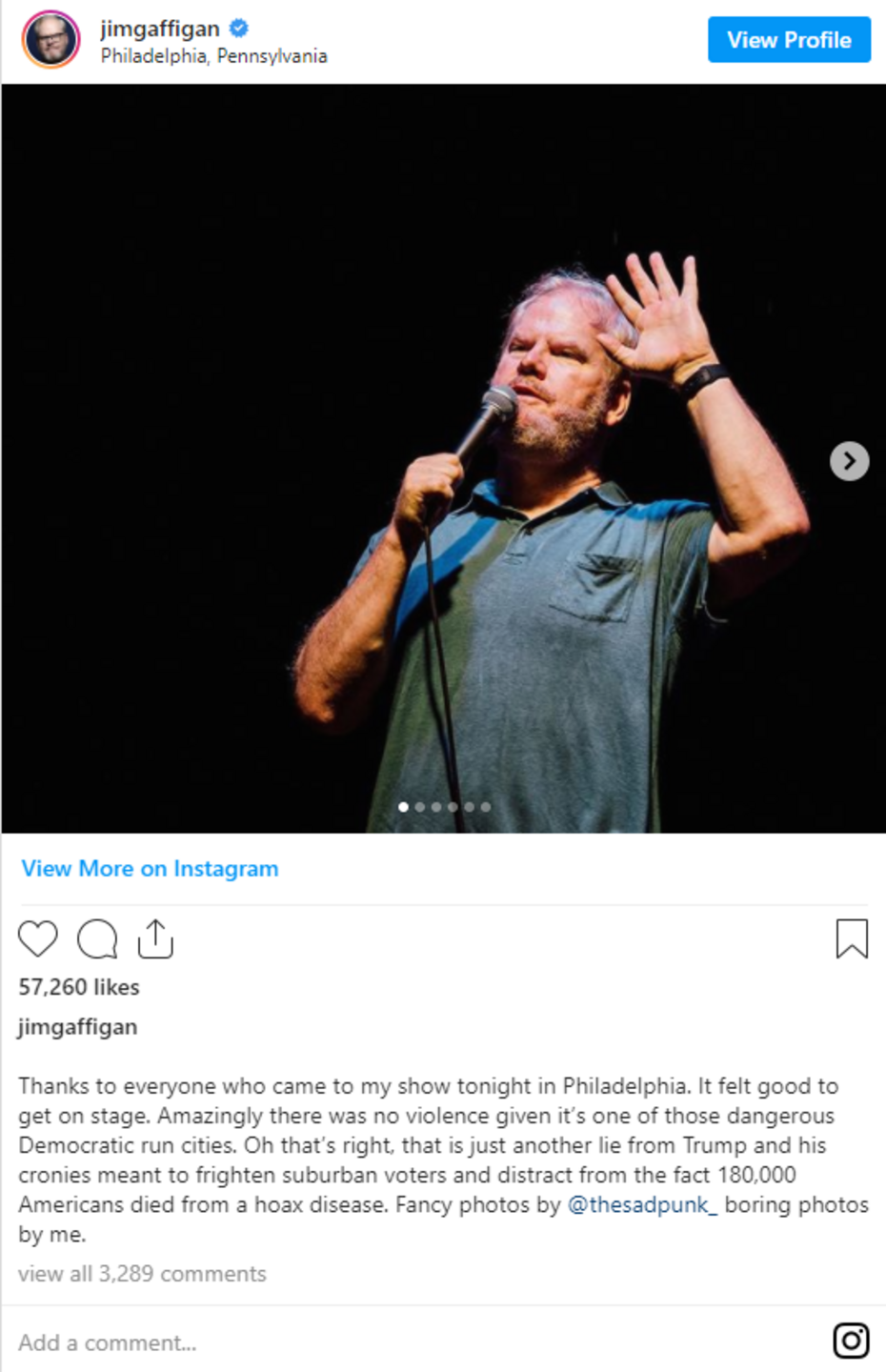 Thanks to everyone who came to my show tonight in Philadelphia. It felt good to get on stage. Amazingly there was no violence given it’s one of those dangerous Democratic run cities. Oh that’s right, that is just another lie from Trump and his cronies meant to frighten suburban voters and distract from the fact 180,000 Americans died from a hoax disease. Fancy photos by @thesadpunk_ boring photos by me.

Where to even begin?

The Democratic leadership in city after city after city -- think Portland, Denver, Chicago, Minneapolis and more -- had their police divisions stand down and let the violence overwhelm the city. They appeased the mob, which only emboldened it.

When President Trump offered federal help to quell the violence, Democrats either insulted him or stiffly said “no.”  The one volley of federal protection for beleaguered Portland found most of the Left, including Speaker of the House Nancy Pelosi, siding with the rioters.

For Portland Mayor Ted Wheeler, his combination of fecklessness and appeasement meant the mob literally came to his front door. He's now moving.

Gaffigan is a victim of Fake News, for sure. He’s also an adult who has access to a wealth of news sources to get the full picture. He’s as guilty of gaslighting his followers as the news is of outright lying to its readers.