The far-left comedian famously curtailed her career when she posed with the faux severed head of President Donald Trump. Even our cynical culture cried foul over the image, one mirroring the atrocities committed by ISIS.

Griffin apologized, melted down and then un-apologized when she realized the Resistance cheered on her visual savagery. All the cool celebrities wished death on President Trump.

She’s been milking that photo’s fallout ever since.

This week she doubled down on that hate. First, she asked for a needle filled with air be injected into President Donald Trump, a potentially deadly act. Later, she let everyone know she meant exactly what she said.

Twitter, which normally ignores liberal celebrities who break the platform’s rules, actually took down Griffin’s initial Tweet. The follow up, alas, remains on the site. Editor’s note: Apologies for the harsh language but it’s important context. 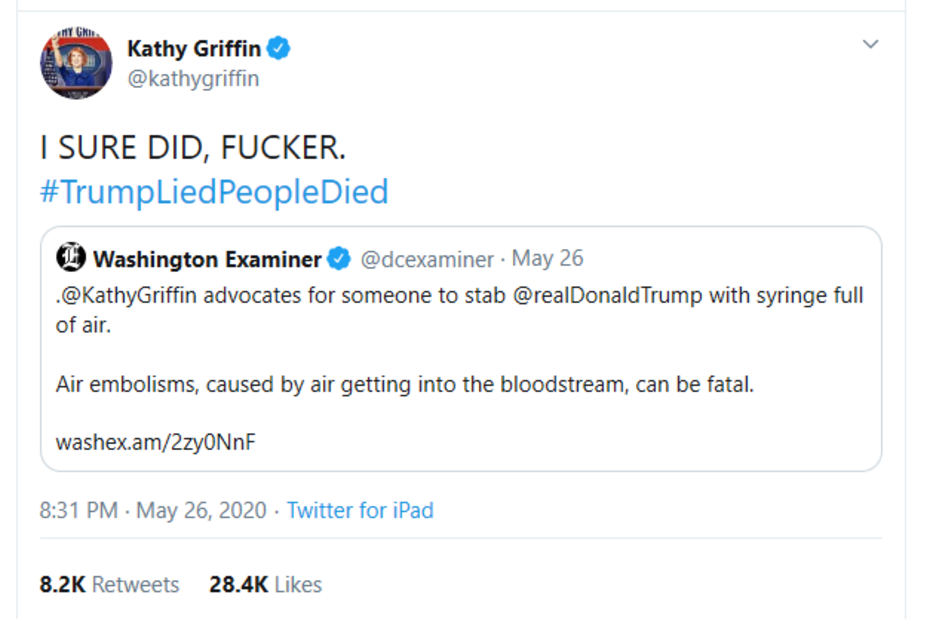 Why does this matter? She’s just one self-described “D-list” celebrity. The fact that Twitter didn’t remove her second, incendiary Tweet reveals plenty about the service.

Griffin isn’t alone in flagrantly breaking the Twitter rules sans consequence. Consider far-left filmmaker Michael Moore. This Tweet alone is an obvious call for violence, coming at a time when the country is literally aflame as rioters use George Floyd’s tragic death to foment chaos. 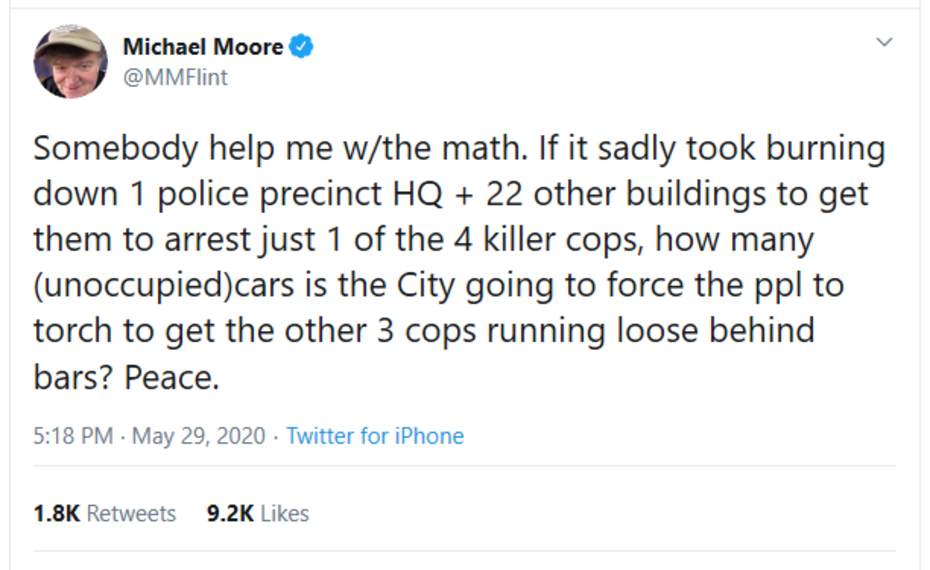 Ice Cube asked, on Twitter, if it was the right time to “strike back” following Floyd’s death. More recently, the rapper/actor shared his “mood,” which clearly implied physical violence. 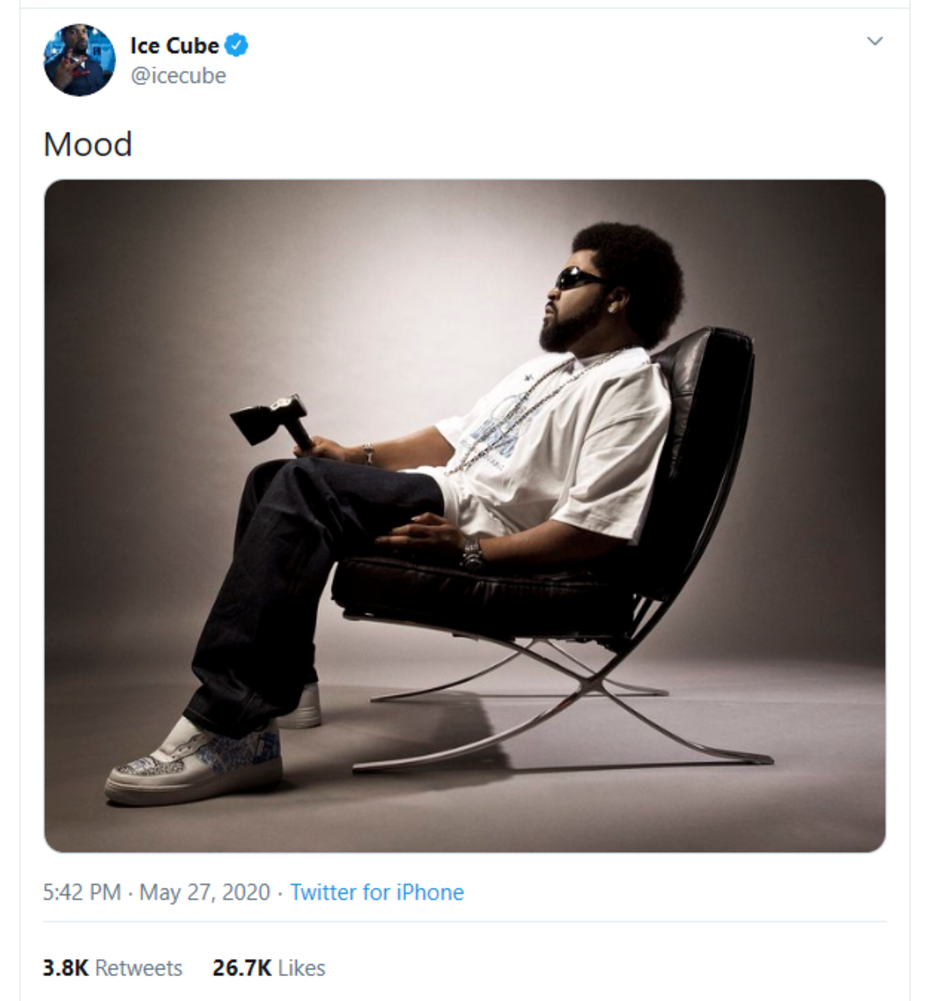 Ice Cube previously shared a fake photo suggesting the police officer who killed George Floyd was a white supremacist. He also shared a photo of a black figure stomping on a white figure.

Tennis legend Martina Navratilova called for riots on the platform before backpedaling a short while later. The superstar, not Team Twitter, deleted her Tweet while serving up a weak rationale.

Hateful conduct: You may not promote violence against or directly attack or threaten other people on the basis of race, ethnicity, national origin, caste, sexual orientation, gender, gender identity, religious affiliation, age, disability, or serious disease. We also do not allow accounts whose primary purpose is inciting harm towards others on the basis of these categories.

These events all happened within the last week, but the problem isn’t new. For years Twitters has allowed the most hateful comments from liberal celebrities to thrive unchecked. Among the stars who frequently flout the Twitter rules include Tom Arnold, Bette Midler, Chelsea Handler and Ron Perlman.

Actress Ellen Barkin wished death on President Trump and hoped disgraced comedian Louis CK would be shot at or raped.

Meanwhile, President Trump is declaring war on Twitter’s overt biases while the platform singles him out with dubious fact checks.

Twitter’s liberal bias comes in many forms, from letting progressive stars get away with almost anything to “moments” meant to frame the news narrative.

Fox News’ Tucker Carlson struck at the heart of the matter.

The problem isn’t confined to celebrities, of course, Countless examples exist of verified Twitter accounts calling for violence and attacking people in ways that defy Twitter rules. The below Tweets came as multiple American cities were under attack by rioters. 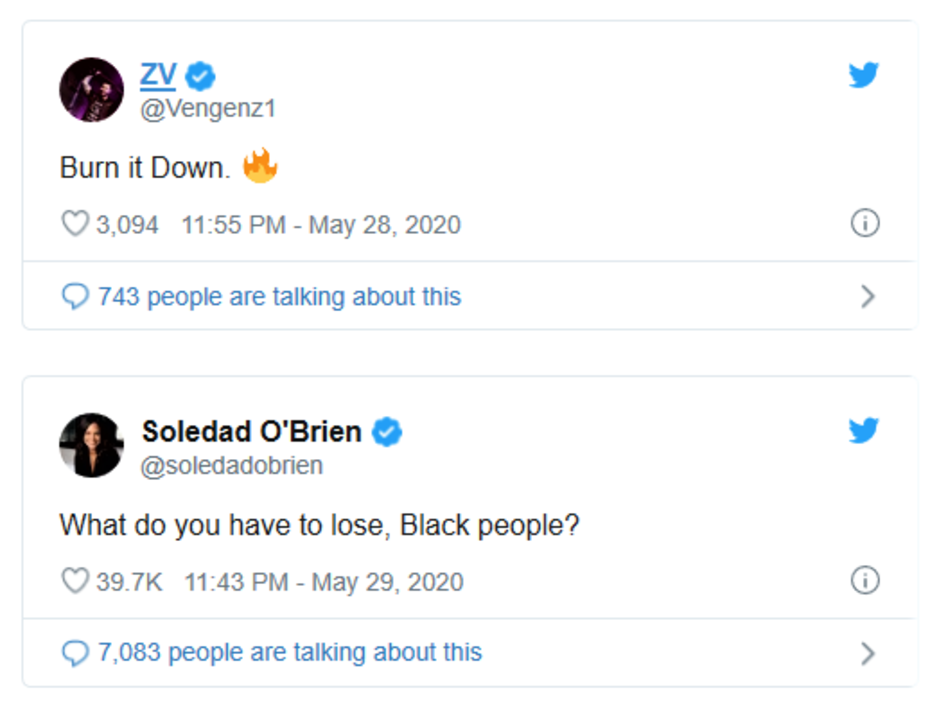 The Oscar-nominee got banned last year, one of several Twitter penalties he’s suffered over the years, for sharing an historical quote evoking violent thoughts. 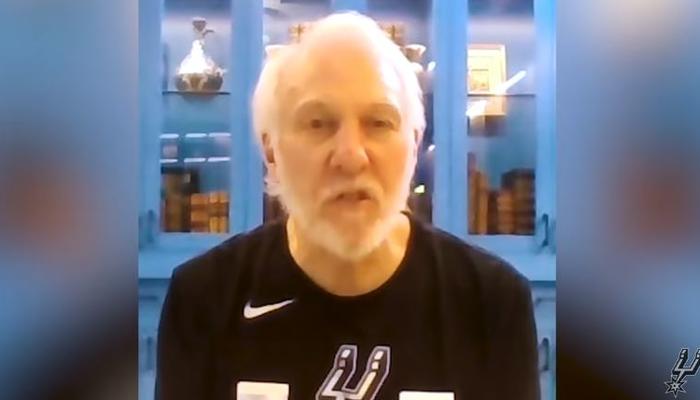 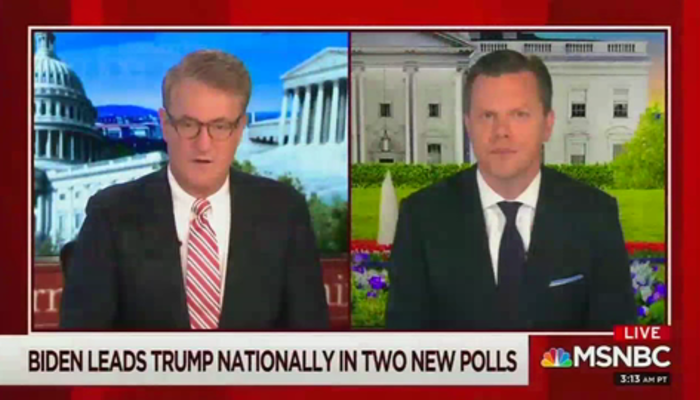 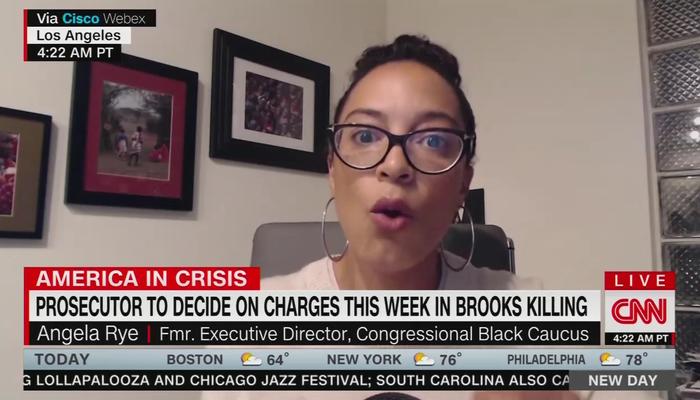