Will Liberal Shia LaBeouf’s Trump Hate Save His Career? 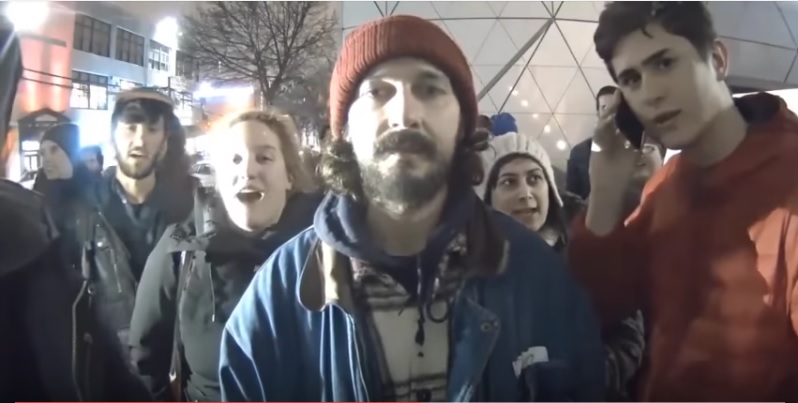 Will Shia LaBeouf’s Trump hate save his career? The Transformers star is in big trouble. Again. Could his ardent hate for President Trump help him bounce back?

Mel Gibson couldn’t get arrested in Hollywood following his oh, so famous public meltdown in 2006.

The Lethal Weapon star ranted against the Jews while being cuffed on DUI charges. It took years for Gibson to get in the industry’s good graces again. He apologized repeatedly, kept a low profile and performed in some indie films before winning raves for his 2016 war film Hacksaw Ridge.

Will Shia LaBeouf follow in Gibson’s tainted footsteps? Or will the actor’s anti-Trump performance art buffer him against a similar career catastrophe?

The American Honey star is most famous these days for his “He Will Not Divide Us” shtick. The actor, like 98 percent of his Hollywood brethren, can’t stand the new Commander in Chief. So he created a 24/7 art installation centered around the aforementioned phrase aimed at President Donald Trump.

Violence quickly ensued. LaBeouf had to move the installation out of New York. Every ounce of the story generated reams of press. It involved President Trump, a modest celebrity known for combustible behavior, the long arm of the law and the all-import curiosity factor.

So why are so many of the outlets reporting on LaBeouf’s recent racially-tinged tired against police memory holing his art installation?

It’s almost like they don’t want to connect him to his far-left venom against President Trump. Reporters are expert at hiding news that paints liberal stars in an unflattering light.

The media may be hiding the actor’s recent anti-Trump tirades, but you’d be hard-pressed to live in the Hollywood eco-system and not be aware of it.

Seinfeld alum Michael Richards saw his career collapse after he called a black audience member the “n-word” during a stand-up performance. In a related story, Grey’s Anatomy star Isaiah Washington got fired after using a gay slur against a colleague. He also watched as the job offers started to dry up following the imbroglio.

Will LaBeouf suffer a similar fate? Should he?

It’s certainly complicated on the surface. We’ve almost come to expect such outrageous antics from LaBeouf. This isn’t his first run-in with the law.

He never achieved the level of fame Gibson had at his personal peak. Of late, LaBeouf has found work in independent films mostly (Man Down, Charlie Countryman).

And while some stars serve up lame, PR-soaked apologies LaBeouf did just the opposite. His recent mea culpa response sounded sincere and self-aware.

He needs help. And he knows it.

He might get professional help from an industry willing to overlook plenty of personal miscues … for the right reasons. LaBeouf’s anti-Trump fervor could do the trick.