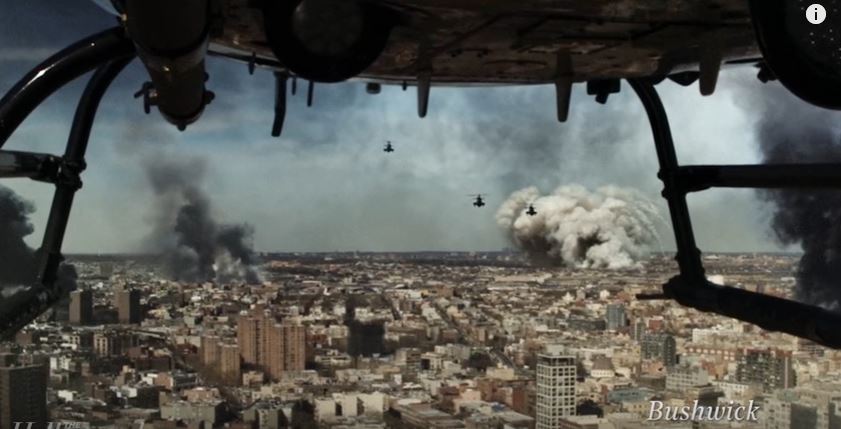 Sundance shines its spotlight on a film depicting Texas secessionists in the ugliest light possible.

Films can take years from inspiration to the big screen. Sometimes during that process the zeitgeist catches up to a project in amazing ways.

That doesn’t appear to be the case with Bushwick.

The thriller, which enjoyed a cushy spot in the current Sundance Film Festival lineup, leans on the notion that Texans want to secede from the country. That’s so 2016.

The film doesn’t just miss the cultural mood, though. It’s yet another cheap shot at southern America. Bushwick, according to early reports, paints the secessionist movement as racist, violent and willing to indiscriminately kill anyone who doesn’t believe in their cause.

Consider it Hollywood’s first bigoted response to the Age of Trump.

Brittany Snow and Dave Bautista (Guardians of the Galaxy) star as unlikely duo trying to survive after a group invades the Bushwick neighborhood of Brooklyn.

Inspired by (sensationalized) reports that former Texas Gov. Rick Perry was advocating the state secede from the Union after the election of President Obama, the invading military presence in Bushwick turns out to be a consortium of soldiers from multiple Southern states looking to force the government’s hand in ratifying a multi-state secession. They’re focused on areas like Bushwick because the “ethno-diversity” there is believed to make it for easy targets to occupy.

Instead of Americans banding together to rise up against a foreign invader, Bushwick residents must unite to defeat an enemy who thinks principles like racial tolerance make their city weak.

The site dubs the movie a “cosmopolitan revenge fantasy.”

The secessionists deride New York City gun laws and spout white nationalist rhetoric, so they’re surprised when they encounter not only armed resistance, but a neighborhood willing to temporarily put aside its internal conflicts and fight together.

Bushwick goes out of its way to refute the neighborhood’s stereotype, though, as well as the idea that city-dwellers are godless coastal elites and not “real Americans.”

It’s The Warriors meets a left-leaning take on Red Dawn, a look at politically inspired chaos instead of crime.

Sundance Film Festival founder Robert Redford recently told reporters that his iconic event, which just debuted the sequel to An Inconvenient Truth, isn’t political in nature. “We stay away from politics,” the film legend said.

“We’re premiering it the day after Trump’s inauguration,” says Nate Bolotin of XYZ Films, which produced Bushwick and is co-repping sales with WME. “I feel like there’s a connective tie between them, and an opportunity to put a bigger spotlight on the movie.”

Bushwick does not currently have a release date.