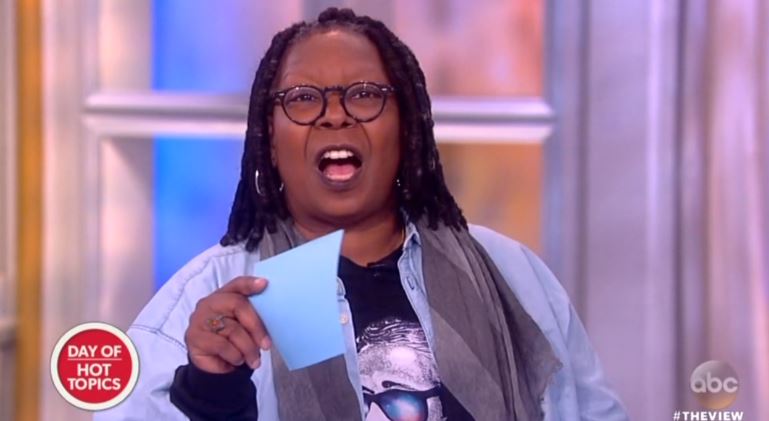 Here's a quick list for The View host of times Hollywood blacklisted conservatives.

And, for a change, she made some sound arguments to back up her thinking this week on The View.

Goldberg name checked successful stars like Kelsey Grammer and rocker Ted Nugent who are both fiercely conservative and actively employed. She also said the right-leaning Elisabeth Hasselbeck worked for years on The View without any repercussions.

If only that were the whole story.

The current token conservative on The View, Jedediah Bila, brought up the fact that a group of Hollywood conservatives met secretly as proof of the town’s biases.

Friends of Abe, which appears to have shattered as a result of Donald Trump’s ascent, let right-minded stars commiserate without being exposed as conservatives. Liberals, by comparison, have no problem when media outlets share every decadent detail of their DNC fundraisers.

That’s all the proof you need that there’s a McCarthy-like streak in modern Hollywood. It doesn’t stop there. So, for Goldberg’s sake, here are other examples of Hollywood treating conservatives like second-class citizens … or worse.

From Clueless to Jobless: Stacey Dash rose to fame as a co-star in the beloved cult comedy Clueless. The gorgeous actress, an unabashed conservative, doesn’t work much these days. Why? Let her tell the tale: “My acting opportunities have ceased because of my political beliefs. I’m being persecuted in Hollywood. I’ve been blacklisted. My agents have dropped me.”

Pro Trump? Take a Hike: The Hollywood Reporter shared a shocking trend last year, only the publication didn’t quite grasp the gravity of its own exclusive. “While THR spoke to dozens of Trump voters, few wished to announce their support, citing their desire to avoid backlash from co-workers. One makeup artist, for example, says longtime clients stopped hiring her after learning she was a Republican.”

Doc Worker Code Names: John Sullivan, the director of the smash documentary 2016: Obama’s America, once shared a chilling story with this reporter. Sullivan said some of the crew members on his project asked to work under pseudonyms for fear of industry backlash. “They’re were like, ‘hey, I really want to do this project. I want to work with you, but I’m concerned with working in the future.” What if a potential employer saw their name attached to an openly conservative project? They might not get the gig, they feared.

Not So Funny Business: Heather McDonald is no fan of Donald Trump. She’s still a Republican, something you may not know from her many appearances on Chelsea Lately. She shared what it meant to be a Republican in Hollywood with this site a few months back.

“I thought they were being dramatic,” she says of the group’s clandestine nature. “Then I started working on Chelsea Lately … I had no idea [Republican] was such a dirty word … In 2008 it was especially bad. If you weren’t for Obama then you hated black people.”

That Hollywood disconnect got much worse when Trump emerged as the GOP candidate last year.

“If you’re for Trump, you better keep your mouth shut if you want to work in this town. It’s the truth,” she says.

No Monologue Allowed: Maria Conchita Alonso dared to cut a political video in 2014 for a conservative politician. Her punishment? She was forced to quit a Spanish language production of The Vagina Monologues due to the boycott pressure placed upon her. The artistic community neglected to rally to her side.

Blacklist Then … and Now: Veteran performer Orson Bean embraced conservatism later in life. That gave him a unique perspective on how Hollywood treats two very different political parties. Here’s what Bean told his son-in-law, Andrew Breitbart, back in 2007. “It’s harder now to be an open conservative on a Hollywood set than it was back then to be a Communist.”