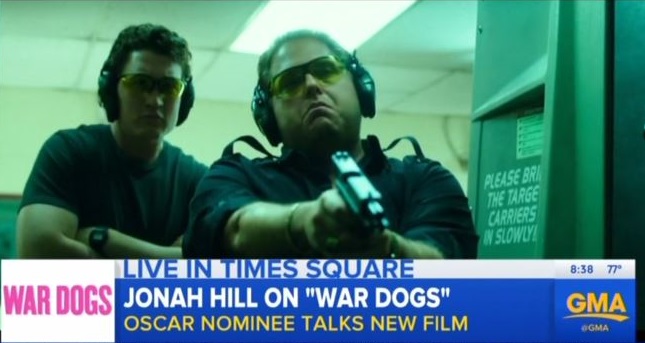 You’ll get a blast from the recent past with War Dogs, a new comedy ripped from real headlines.

Only this isn’t In the Valley of Elah 2 or Redacted: Even Redactier.

War Dogs has more on its mind than rehashing old scores. It also confirms Jonah Hill as a mesmerizing talent. Yes, Miles Teller plays the audience surrogate. It’s Hill who buys and sells the fact-based film.

Teller stars as David, a 20-something entrepreneur who is getting all those early life failures out of the way in a hurry. So when he reunites with old high school chum Efraim (Hill), you know David’s ready for a career boost.

And boy does Efraim have one.

Efraim stumbled onto the U.S. Military’s shopping bonanza. The government needs guns to equip soldiers stationed in Iraq. An open bidding process means any sharp seller can score a contract with the right sales pitch. 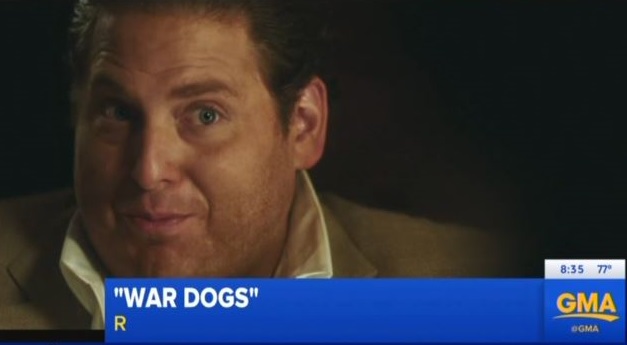 The full-framed Efraim is all about sales. He even gets thisclose to picking up a gorgeous woman using the haughtiest pick up lines ever uttered on screen.

So David and Efraim are suddenly swimming in cash. And if it means occasionally dropping into the hottest hot spots on the planet, they’ll do it for the cool stories to tell later.

They’re both anti-Bush and anti-Iraq War.

“I f***ing hate Bush. This is about being pro-money,” Efraim cries.

War is an economy, we’re told as Hangover director Todd Phillips’ latest film opens. Nations risk blood, treasure and so much more to line their pockets. 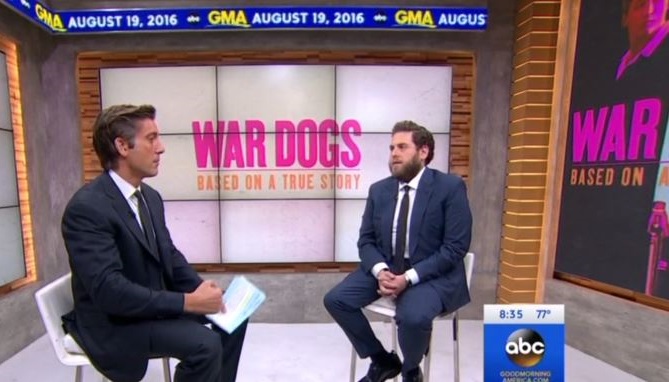 It’s an absurd rationale for complicated geopolitical truths, but it’s reminiscent of the discredited “war for oil” meme during President George W. Bush’s presidency. War Dogs gets the obligatory Bush bashing out of the way early. From there, it’s a compelling tale of greed getting the best of us.

The protagonists are anti-war to the core. Yet they don’t blink while cashing those gargantuan checks. The filmmakers probably relished hitting Bush one more time, but they’ve inadvertently revealed the soulless segment of the anti-war movement

You know, the protesters who retired their placards after Barack Obama took the oath of office.

David and Efraim lust for more than just cash. They crave the adventures they find themselves in. There’s a not-so-hidden tale of Millennial types unwilling to do the hard work necessary for success.

Phillips generally goes for the yuks first and foremost. Here, they come from the characters and the deep, almost brotherly bond between the main characters. The director’s zippy visual style is firmly in place, but it’s servicing a credible story with minor truths dotting the path.

War Dogs teeters at times, falling into a regrettable pattern of business successes and failures. But there’s always another Hill moment to slap us out of our complacency. We see glimpses of Efraim’s raggedy soul in the process, flashes that help set up the film’s bigger conflicts.

The War Dogs soundtrack bludgeons us with classic rock standards like another, lesser film from this summer. The ditties are integrated here far better than what Suicide Squad attempted. It still feels like an emotional crutch. You’ll pine for a composer eager to convey similar moods with an original flourish.

Bradley Cooper arrives mid-film, doing a star turn as a fellow arms dealer with a deal too good to be true. Or is it?

You’ll be scrambling to separate the fact from the fiction displayed in War Dogs. Fidelity aside, Phillips presents a compelling hybrid that manages to be oddly non-partisan and routinely engaging.