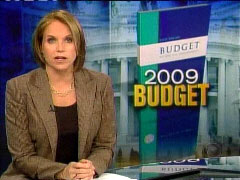 On FNC's Special Report with Brit Hume, reporter James Rosen scolded the sloppy reporting of his journalistic colleagues, specifically how “the New York Times' lead article on the subject referred matter of factly to the 'trimming' of Medicare and Medicaid. In fact, Medicare will continue to see its budget grow, by 5 percent instead of 7.2 percent.”

Raddatz hinted at her distorted logic -- in which a hike greater than inflation is a “cut” just because it's less than a previously project level -- as she cited how “the President's budget slashes billions of dollars in the growth of federal health care programs.” Yes, a reduction in the rate of growth in a program which has been soaring. The Heritage Foundation's Brian Reidl noted Monday that “Medicare spending has leapt by 51 percent over the past four years.”

President Bush did something today that's likely to set off a new battle with Democrats in Congress in his final year in office. He sent them a budget that would, for the first time, see federal spending top $3 trillion, an increase of 6 percent. Military spending next year would rise more than 7 percent, while spending on Medicare and Medicaid would go down. The President projects a deficit of $407 billion for 2009.

Martha Raddatz in her piece on the February 4 World News on ABC:

The President has asked for 7.5 percent increase, to more than $515 billion, to fund the Department of Defense. That does not include full funding for the wars in Iraq and Afghanistan, which could total $200 billion. Money for homeland security up nearly 7 percent, including a big increase for border security and immigration enforcement. And there is that $145 billion economic stimulus package, which gives tax rebates to millions of Americans.

Then, with “MEDICARE AND MEDICAID Cut by $200 billion” on screen, she insisted: 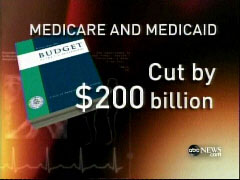 But there are some losers here. The President's budget slashes billions of dollars in the growth of federal health care programs. Medicare and Medicaid would be cut by almost $200 billion, by freezing reimbursement rates for health care providers and limiting the money hospitals will receive for treating the uninsured. Even with these cuts the deficit would be about $407 billion.

An excerpt from a Monday posting by the Heritage Foundation's Brian M. Riedl:

In what has become an annual ritual, the release of the President's budget has been followed by interest groups decrying alleged cuts to social and education spending. The facts do not match the rhetoric.

The budget addresses Medicare overspending. Medicare spending has leapt by 51 percent over the past four years and is projected to continue growing at unsustainable rates for several decades. The President's proposal would lower Medicare's growth rate to 5 percent....