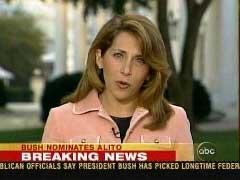 Supreme Court nominee Samuel Alito is conservative and all the television coverage Monday morning made that clear, but several reporters went further by either repeatedly applying the tag or by adding adjectives to suggest he's out of the mainstream. On ABC's Good Morning America, Jessica Yellin issued five labels in under 50 seconds, describing Alito as someone who will please Bush's "conservative base," has "established conservative credentials," is "a law and order conservative," who is "in the mold of conservative Justice Antonin Scalia" and whose "writing is so similar to the conservative justice's, he's sometimes nicknamed 'Scalito.'" Just before Bush's announcement, Charles Gibson called Alito "very conservative" and "the most conservative member" of the otherwise "liberal appellate court." Gibson soon repeated himself: "The President has picked somebody very conservative." Over on CBS's Early Show, Gloria Borger dubbed Alito "quite conservative," the same label applied a few minutes earlier on CNN's Daybreak by Carol Costello before Jeffrey Toobin applied the "very conservative" tag. NBC's Katie Couric asserted that Alito "could be a controversial choice" because he's "a favorite on the right and he would replace moderate justice Sandra Day O'Connor."

Still shot is of Yellin. Transcripts of above and more quotes follow.

This item was first posted a short time ago as an MRC CyberAlert item.

Below are fuller quotations, taken from this morning's coverage, as collected by MRC analysts Geoffrey Dickens, Ken Shepherd, Megan McCormack and Michael Rule, with repetitive or extremist ideological labels in ALL CAPS:

# Jessica Yellen, from the White House, at the top of 7am EST half hour of Good Morning America, applied five labels in under 50 seconds:

"Good morning. President Bush will please his CONSERVATIVE base with this pick. Samuel Alito is certain to be opposed by many Democrats, but no one will accuse him of being unqualified. Samuel Alito is a federal judge in New Jersey with established CONSERVATIVE credentials. He has well known views on constitutional issues and unquestioned intellectual heft. Alito is considered a law and order CONSERVATIVE, and many Democrats believe he would oppose abortion rights because he supported a law that required women to notify their husbands before having an abortion. In choosing Alito, the President has made good on a campaign promise to pick Supreme Court nominees in the mold of CONSERVATIVE Justice Antonin Scalia. Alito once clerked for Justice Scalia, and his writing is so similar to the CONSERVATIVE justice's, he's sometimes nicknamed 'Scalito.'"

A bit later, after a Capitol Hill report from Linda Douglass:

Gibson asked George Stephanopoulos to confirm a liberal talking point: "George, Linda Douglass said just a moment ago that the Democrats. liberal Democrats on the hill are already saying well he gave into pressure from the right of his party, to pick Judge Alito. Fair charge?"

Stephanopoulos agreed: "Sure. Absolutely. Conservatives did not back Harriet Miers, they brought her down, that's the Democrats talking point. There's no question the number one goal here for the White House coming out of the Harriet Miers failed nomination, of course all the troubles of the CIA leak investigation, is to unify their base behind this pick, to keep that promise that the President said to pick someone like Antonin Scalia, I think conservatives will be very happy and the President will have given them what they wanted."

At 8am EST, a minute before President Bush's announcement, Gibson delivered this biography of Alito:

"He is VERY CONSERVATIVE, this is a liberal appellate court, but he is the MOST CONSERVATIVE member on it, but we've just been looking in the Almanac of the Federal Judiciary and other judges say about him -- 'a brilliant jurist,' 'outstanding is to use understatement,' 'the best judge on the circuit; detailed, analytical, and thorough.' The President has picked somebody VERY CONSERVATIVE, but a very accomplished jurist as well. Obviously his opinions on things like abortion are going to be closely scrutinized now, but this obviously is the appointment the President making because Harriet Miers withdrew her nomination last week. Here's the President and Judge Alito."

"NBC News has confirmed the President will nominate Judge Samuel Alito to the Supreme Court just about an hour from now. Alito serves on the U.S. Court of Appeals in Philadelphia and he is so CONSISTENTLY CONSERVATIVE he's been called Scalito in comparison to Supreme Court Justice Antonin Scalia.”

Lauer: "And good morning and welcome to this NBC News Special Report. I'm Matt Lauer along with Katie Couric. In just a minute or so President Bush will nominate conservative appeals court judge Samuel Alito to the Supreme Court."

Couric: "It could be a controversial choice. Alito is a favorite on the right and he would replace moderate justice Sandra Day O'Connor who was often a swing vote on the high court. This comes just four days after news broke that Harriet Miers was, in fact, dropping out of the running for the Supreme Court."

"At 8am Eastern, President Bush will name his Supreme Court nominee. And we now know who that is, a federal judge from Philadelphia. His name is Samuel Alito. He's been on the bench for 15 years. He's 55 years old. He was a former U.S. attorney, lots of experience. He's also QUITE CONSERVATIVE. So it seems as if President Bush has made this pick to please his conservative base, which means there will be quite a fight."

Jeffrey Toobin, just past 7am EST, on American Morning:

"He was the United States attorney, the chief prosecutor in New Jersey, under the first Bush administration, nominated by the first President Bush to the Third Circuit Court of Appeals, which covers Pennsylvania, Delaware and New Jersey. He has served there for 15 years. So, so he is certainly an experienced judge. The qualifications issue, I don't think will cut against him at all. The big issue will be judicial philosophy. He's VERY CONSERVATIVE, and the issue that he is most publicly identified with is abortion...."