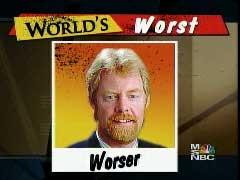 MSNBC's Keith Olbermann, on Friday night's Countdown, smeared the Media Research Center (MRC), the parent of NewsBusters, as “a scam” and claimed, in awarding MRC President Brent Bozell the “worser” slot in his nightly “worst person” gimmick, that “the only person distorting as usual is Bozell.” Olbermann was defending himself “against the charge of wacky guy” Bozell who “accused me of distortion for having said that Rush Limbaugh had said on air, quote, 'Cindy Sheehan is just Bill Burkett. Her story is nothing more than forged documents. There's nothing about it that's real.'” Olbermann proceeded to slam Limbaugh as the “Worst Person in the World” for supposedly denying the quote, alleging: "Like your career, Rush. You're finished, credibility spent."

While Olbermann zeroed in on Bozell, the MRC's critiques of him appeared in an August 18 NewsBusters posting (with video) that I wrote which was reprinted in the MRC's CyberAlert. I never suggested that Limbaugh did not utter the sentence sequence quoted by Olbermann, but that he distorted Limbaugh's point that the media see both Sheehan and Burkett as "an opportunity" to exploit and that "it doesn't matter what the specifics of Cindy Sheehan's case are." Olbermann had snidely claimed, "I guess she made up that dead-son-in-Iraq business" -- a ridiculous interpretation of some jumbled words. Video: Windows Media or RealPlayer. Full transcript follows:

Just before I was about to leave the MRC for the evening, MRC news analyst Brad Wilmouth caught, while watching Countdown on our DVR system, Olbermann's angry outburst. 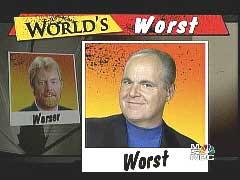 Over a picture of Bozell beneath a “World's Worst” heading and with “Worser” below, followed by a still shot with Bozell faded into background and Limbaugh up front tagged as “Worst,” Keith Olbermann impugned the two conservatives:

"Time for Countdown's list of today's nominees to the coveted title of 'Worst Person in the World.' There's just two tonight. A very close second, Brent Bozell -- yeah, the wacky guy from that Media Research Center scam -- accused me of distortion for having said that Rush Limbaugh had said on air, quote, 'Cindy Sheehan is just Bill Burkett. Her story is nothing more than forged documents. There's nothing about it that's real.' The only person distorting as usual is Bozell. Limbaugh said it on the air on August 15th. We have the transcript. Nothing in the transcript mitigates what he said. I'll put it online over the weekend. So, Bozell is close, but the winner is Limbaugh for saying, 'I never said this,' when, of course, he sure did, especially considering the line comparing Sheehan to Burkett was a featured quote on his Web site for his paying subscribers until it was mysteriously scrubbed off. And having now added about Sheehan's dead son, quote, 'I'm leery of even having to express sympathy. We all lose things.' Like your career, Rush. You're finished, credibility spent. Get lost! Rush Limbaugh, once again, today's 'Worst Person in the World!'"

[Update, Aug 22. Today on his blog, Bloggermann, Olbermann put his slam online in a rant against Rush Limbaugh : "Simultaneously, the hapless Brent Bozell, who runs that scam called The Media Research Center, declared that I was guilty of 'distortion' in quoting the Sheehan remarks."]