On Thursday's New Day on CNN, during a discussion of the Trump administration's commission on voter fraud, the regular CNN panel members all pushed a liberal point of view of dismissing voter fraud, but playing up "voter disenfranchisement" as a problem allegedly more worthy of investigation. CNN analysts David Gregory and John Avlon joined CNN hosts Chris Cuomo and Alisyn Camerota in hitting the issue from the left.

The Voter Integrity Commission was first raised during a discussion of the tensions between President Donald Trump and Breitbart's Steve Bannon when Cuomo read a tweet from Trump that brought up the commission which is disbanding. Cuomo claimed that voter ID requirements "chills voting" and causes "disenfranchisement." Cuomo:

He (Trump) is talking about the election commission, the commission on voter fraud. He's now making the case for voter ID. The irony there is, if they had done a real investigation into voting in this country, you'd realize that there are such problems with disenfranchisement, there's such reasons that having an ID qualification chills voting. But that's what he's talking about this morning.

A bit later, during the segment that focused on the voting commission, Cuomo conceded that voter ID was "legitimate" to "debate," but then defended the decision by some secretaries of state to refuse to cooperate with the commission's requests for information:

The rest of it, where's the debate in that? How is this just not untrue on its face? States did not "not comply" because they didn't want to reveal illegal voting. Anybody can look at the pleadings -- they thought this was a setup -- they thought this was a railroad situation where Trump was trying to show through Kris Kobach that something happened in the election that did not happen. And that's why they did not want to comply.

Gregory dismissed the goals of the commission: 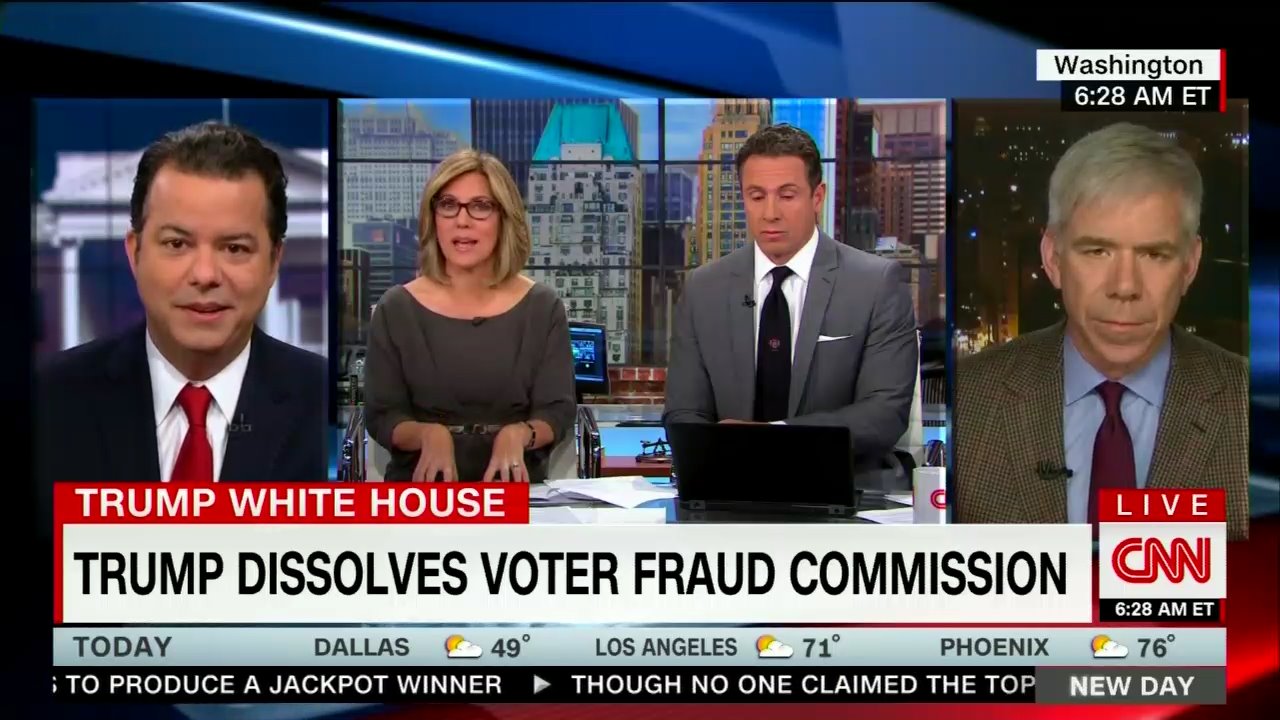 Right, because it was a waste of time. It was an abuse of government resources and time. This is a joke. I mean, the President saying that there's voter ID problems and voter fraud -- well, he's the same person who said that President Obama wasn't born in this country. I mean, let's stop paying attention to this. He did a big to-do, and it went nowhere because there was nothing to it.

The CNN analyst and former NBC News host then claimed that there is "disenfranchisement" as he added: "If he wants to get serious about voter fraud, he ought to look into voter disenfranchisement. That's the issue. Let's get more people voting."

A few minutes later, Avlon asserted: "And the real issue obviously in this country is not voter fraud -- the real issue is voter disenfranchisement -- is obstacles, unnecessary obstacles to voting."

Camerota soon repeated a misleading claim that the commission had improperly requested personal information about voters that secretaries of state were legally unable to comply with -- even though the original letter making the request specified that it was only asking for whatever information they were legally allowed to provide. Camerota:

That's part of why they couldn't get many secretaries of state to cooperate -- because, as you say, it was a waste of time and spinning their wheels. Also, because, as you know, the White House first started asking for people's dates of birth, Social Security numbers, and the secretaries of state were, like, "Whoa, whoa, whoa, why are we giving -- handing you over all this information?"

Avlon and Cuomo then complained about "voter suppression" and "gerrymandering" as they went back and forth:

AVLON: We do need election reform in this country. We could use a comprehensive study about voter disenfranchisement, about voter suppression, but not an ideologically driven organization like this was. And we'll see now what the Department of Homeland Security actually does.

CUOMO: And that's the shame, though, David, right? Because you could do a panel like this, get into gerrymandering, get into what they do --

CUOMO: -- in different places and different levels of chilling they do with the voting. Could have done that, and, you know what, he could have expanded his base. Instead, he's got another day of getting a slap-down for a bad political move.