On Monday's The Situation Room on CNN, host Wolf Blitzer described Republican presidential candidates as putting out a "steady drumbeat" of "harsh anti-Muslim sentiments" because of their expressed concerns about ISIS terrorists exploiting America's refugee program to enter the country, even though the candidates who want to restrict immigration of Syrian refugees still support helping establish refugee camps near Syria, and mostly support increasing military efforts to combat the terrorists who persecute them.

Blitzer's negative characterization of the Republican candidates came as he introduced a report devoted to disputing GOP presidential candidate Donald Trump's claims that he saw thousands of Muslims in Jersey City cheering after the September 11, 2001, attacks. Blitzer:

Amid a steady drumbeat of some harsh anti-Muslim sentiments by Republican presidential candidates, Donald Trump is sticking to his story that he witnessed thousands of people cheering the 9/11 attack on New York's World Trade Center. Trump is about to speak in Columbus, Ohio. Our political reporter, Sara Murray, is on the scene for us. So what's the latest on the controversy, Sara?

Sara Murray's report, the first about Trump shown on The Situation Room since Thursday last week, failed to update viewers that Trump had clarified that he does not support requiring Muslim-Americans to register in a database, as a report from Thursday's The Situation Room had suggested. Blitzer from the November 19 show:

Meanwhile, tonight, Donald Trump isn't ruling out what many people consider a radical step beyond trying to keep Syrian refugees out of the U.S. Trump says he's willing to consider, consider requiring Muslims living in the United States to register with a national database.

Below are transcripts of the relevant reports from the Thursday, November 19, and the Monday, November 23, The Situation Room on CNN: 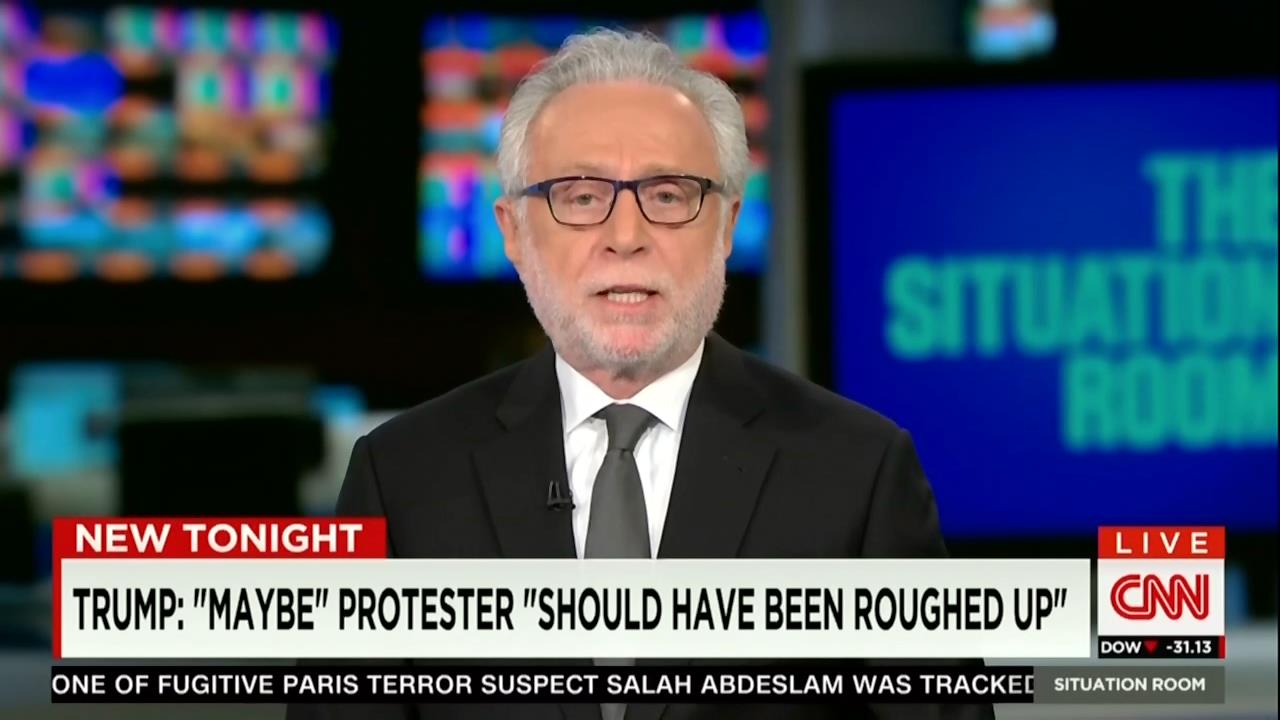 WOLF BLITZER: Meanwhile, tonight, Donald Trump isn't ruling out what many people consider a radical step beyond trying to keep Syrian refugees out of the U.S. Trump says he's willing to consider, consider requiring Muslims living in the United States to register with a national database. Let's go to our political reporter, Sara Murray. She's covering the Trump campaign. She's out there in Iowa right now. What exactly is he saying?

SARA MURRAY: That's right. That was an interview with Yahoo News, and Trump basically said he wouldn't rule out the option of having Muslims register in a database. He said we need to look at all of our options out there. Previously he said he would be open to shutting down some mosques. And tonight in Iowa, he's continued this tough rhetoric, saying it would be suicide to admit Syrian refugees into the United States. Wolf?

BLITZER: So tonight a controversial remark by Dr. Ben Carson on the whole refugee issue. What did he say?

MURRAY: Yeah, we're seeing a number of Republicans trying to take a hard line on this, but Carson caused a bit of a stir today when he compared the Syrian refugee crisis to rabid dogs, using an analogy that some people thought was a little bit indelicate. Take a listen.

DR. BEN CARSON, GOP PRESIDENTIAL CANDIDATE: At the same time, we must always balance. We must balance safety against just being a humanitarian. For instance, you know, if there's a rabid dog running around in your neighborhood, you're probably not going to assume something good about that dog. And you're probably going to put your children out of the way.

MURRAY: Now, at another campaign event today, Carson explained that he was talking about needing to vet the Syrian refugees and better screen them as they come to the U.S. He accused the media of twisting his words, Wolf.

WOLF BLITZER: Amid a steady drumbeat of some harsh anti-Muslim sentiments by Republican presidential candidates, Donald Trump is sticking to his story that he witnessed thousands of people cheering the 9/11 attack on New York's World Trade Center. Trump is about to speak in Columbus, Ohio. Our political reporter, Sara Murray, is on the scene for us. So what's the latest on the controversy, Sara?

SARA MURRAY: That's right, Wolf, He's already said a number of controversial things in the past, including calling for surveillance of some mosques. We'll see if he ramps up that rhetoric tonight. In the wake of the Paris terrorist attacks, Trump is sharpening his anti-terror rhetoric, with some of those salvos now coming under intense scrutiny. Trump contends he saw thousands of people celebrating in New Jersey after the 9/11 attacks.

DONALD TRUMP, GOP PRESIDENTIAL CANDIDATE: I watched in Jersey City, New Jersey, where thousands and thousands of people cheered when that building was coming down.

MURRAY: Standing by his claim even as news organizations and government leaders call it false.

TRUMP AUDIO, FROM ABC NEWS: There were people that were cheering on the other side of New Jersey where you have large Arab populations. They were cheering as the World Trade Center came down.

MURRAY: And tonight, Trump is not backing down, even asking the Washington Post for an apology. The billionaire is pointing to this sentence in a Washington Post story published a week after the 9/11 attacks, in which the paper said law enforcement had detained people allegedly seen cheering on rooftops in Jersey City. Today, that city's mayor said the reports were unfounded. CNN has found no evidence of arrests or video showing Muslims cheering. Still, despite that lack of evidence, today, Trump's main rival, Dr. Ben Carson, said he saw the same thing.

UNIDENTIFIED FEMALE REPORTER: But did you see that happening, though, on 9/11?

DR. BEN CARSON, GOP PRESIDENTIAL CANDIDATE: I saw the film of it, yes.

MURRAY: Trump is also on the defensive for his response to an incident at a campaign event in Alabama this weekend.

TRUMP: Yeah, get him the hell out of here, will you please?

MURRAY: Where a Black Lives Matter protester says he was swarmed by Trump supporters who punched, kicked, and choked him. On Sunday, Trump appeared to condone the crowd's violent response.

TRUMP AUDIO, FROM FNC: Maybe he should have been roughed up because it was absolutely disgusting what he was doing.

BLITZER: Sara Murray reporting for us from Columbus, Ohio, where Donald Trump is about to give a speech. Let's get some analysis -- actually, Sarah, do we have you?

MURRAY: Wolf, we're just wrapping the National Anthem right here. I think you hear the crowd applause behind me. There you go. So the controversy has moved further today. Dr. Ben Carson is walking back his remarks from earlier saying he does not stand behind the statement attributed to him earlier today about people celebrating in New Jersey in the wake of 9/11. He said he saw that video coming from countries in the Middle East.