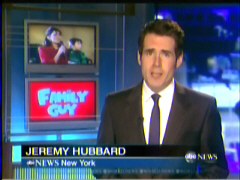 Now that actress Andrea Fay Friedman of the Fox television series the Family Guy has spoken out publicly against Sarah Palin’s criticism of the show, ABC News has aired a story on the controversy, which ran on Saturday's World News. The Family Guy episode in question not only treated Down’s Syndrome as something to laugh at (credit to NB reader Birch Barlow for emailing in the link as a tip), but also made a reference to the former Alaska Governor being the mother of a character – voiced by Friedman as both she and the character have Down’s Syndrome – presumably to suggest that Palin has a tendency to give birth to such children and that doing so would be funny.

As he began the piece showing scenes from the episode, and a clip of Palin saying that the jab at her family felt like a "kick in the gut," correspondent Jeremy Hubbard understated the level of obscenity that Seth MacFarlane has a history of employing on the show as he simply described the show's creator and producer as "irreverent," and informed viewers that fans of the "button-pushing" show would find the episode "hardly shocking."

The ABC correspondent went on to give credibility to the view that Palin may be "overreacting" as he cited what he referred to as "half-hearted" praise for the show by "some" advocates for those with Down's Syndrome, and relayed the argument that the show actually delivers a positive portrayal. Hubbard: "Although there has been criticism, some Down's Syndrome advocates have given half-hearted praise to the cartoon for including a well-rounded character dealing with the disability, which leads Palin detractors to ask: Is she overreacting?"

Hubbard then played a clip of HBO’s Bill Maher, known for making snide comments attacking conservatives, calling Palin the "queen of fake outrage" for daring to condemn the episode.

Below is a complete transcript of the story from the Saturday, February 20, World News on ABC:

SHARYN ALFONSI: Sarah Palin is locking horns with the producers of a cartoon show over their portrayal of a character with Down’s Syndrome. She says it was a cruel reference to her youngest son, Trig, and now, the actress who plays the role is speaking up. Jeremy Hubbard has the story.

JEREMY HUBBARD: For fans of the button-pushing cartoon, the subject matter was hardly shocking.

CARTOON CHARACTER STEWIE GRIFFIN: There's something up with her, isn't there? 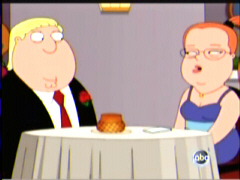 HUBBARD: But Sarah Palin says this one-line jab at her special needs child-

CHRIS: So what do your parents do?

ELLEN: My dad’s an accountant, and my mom is the former governor of Alaska.

SARAH PALIN: When is enough enough? And when are we going to be willing to say, you know, some things aren't really funny?

HUBBARD: Now, there is a clash between Palin, who appeared on The O’Reilly Factor-

PALIN: This world is full of cruel, cold-hearted people who would do such a thing.

HUBBARD: -and Seth MacFarlane, the irreverent creator of The Family Guy, who appeared just last night on HBO’s Real Time with Bill Maher.

BILL MAHER, REAL TIME WITH BILL MAHER: And I really appreciate you for our season premiere bringing a controversy to our show.

HUBBARD: And now, an unlikely third voice is weighing in, the woman who actually provides the voice for that controversial cartoon character. 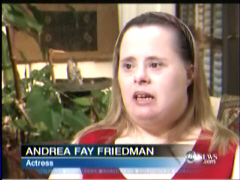 ANDREA FAY FRIEDMAN: For Sarah Palin, she didn't get the joke.

HUBBARD: Actress Andrea Fay Friedman has also worked on the TV shows Life Goes On and Law and Order. She gives motivational speeches around the world, and says her character should be inspirational to others with Down’s Syndrome. It wasn't poking fun at Palin's son, she says, it was poking fun at the former governor.

FRIEDMAN: It would be nice if she did have a sense of humor. Now, come on, Sarah, laugh a little.

HUBBARD: Although there has been criticism, some Down’s Syndrome advocates have given half-hearted praise to the cartoon for including a well-rounded character dealing with the disability, which leads Palin detractors to ask: Is she overreacting?

MAHER: She is the queen of fake outrage, whether it’s David Letterman or you, it’s-

MAHER: -always got to be somebody.

HUBBARD: But the Palin family says the outrage is real and personal. In a Facebook posting, daughter Bristol wrote, if the cartoon’s writers "thought they were being clever in mocking my brother and my family ... they failed. All they proved is that they’re heartless jerks." Jeremy Hubbard, ABC News, New York.