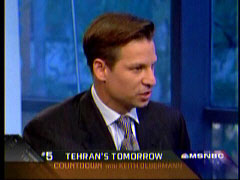 NewsBusters previously documented a claim made by NBC News correspondent Richard Engel on the June 22 Countdown show on MSNBC that the apparent murder of 27-year-old Neda Agha-Soltan during a crackdown by Iranian government forces, and the possibility that she will become the visual symbol for her country’s pro-democracy movement, was reminiscent of the Mohammed al-Dura video of September 2000 which, at the time, was claimed to show a Palestinian boy being shot and killed by Israeli troops. But, while evidence has mounted over the years that the al-Dura video was likely a hoax, Engel and host Keith Olbermann both spoke of the al-Dura "shooting" as if the event were not in dispute, and Engel recounted to viewers that Palestinians see the event as a "symbol of injustice" perpetrated by Israelis against Palestinians. Engel: "I was thinking more, remember Mohammed al-Dura, the boy who was shot in Gaza in his father’s arms and who became a symbol of injustice? I think this is a similar moment."

The pro-Israel group CAMERA (Committee for Accuracy in Middle East Reporting in America) recounts on its Web site that after the group's executive director, Andrea Levin, on June 25 sent a letter of complaint to Engel -- which was also copied to NBC News President Steve Capus -- requesting that NBC revisit and "clarify" Engel's assertions, Capus sent a letter of response accusing CAMERA of "taking a cheap shot" at Engel, even suggesting that the pro-Israel group was not "truly dedicated to advancing journalism," as the NBC News head did not revise Engel's claims about the al-Dura case. Capus, as quoted by CAMERA on its Web site: "If you were truly dedicated to advancing journalism, you would be going out of your way to praise Richard for his work – rather than taking a cheap shot." The NBC News head went on to praise Engel as "a non-biased, dedicated journalist. NBC News considers itself lucky to have him."

CAMERA reports that, after sending a second letter to Capus on July 7, the NBC News president has made no further response. CAMERA published the full text on its Web site of both letters it sent to NBC News. Citing the fact that Capus's correspondence was "communicated privately via email," CAMERA included only brief excerpts of his correspondence.

Letter sent by CAMERA to Richard Engel and copied to Steve Capus on June 25:

We're extremely troubled by your exchange three nights ago with Keith Olbermann in which you compared the shooting death of Neda Agha Soltani — revealed in its tragic and bloody reality in spontaneous filming on the streets of Teheran — to the discredited Muhammad al Dura event of September 2000 in Gaza. Given your familiarity with the Arab-Israeli conflict, it was startling to hear you so energetically insert into the discussion the case of al Dura — especially without noting the scandal that surrounds the France 2 network in perpetrating what is widely believed to be a hoax.

Numerous independent analysts and ballistics experts have confirmed Israel could not have shot al Dura, including James Fallows in The Atlantic, Esther Shapira on German television ARD and others. Numerous analysts, including senior French journalists, have also noted the undeniable fact that Palestinians were staging events and filming them the same day in the same place.

An enormous body of research exists on the entire issue. Indeed, a French court concluded a year ago that the charges of fraudulence and staging in the case were credible on the basis of the vast evidence presented — and that Philippe Karsenty who had been sued for defamation for claiming the event was a hoax had a reasonable basis for leveling the charge. Given all this it seems inexplicable that you would interject the statement that al Dura "was shot in Gaza ... in his father's arms."

Moreover, he may, in your words, have become " a symbol of injustice"— but not at all for the reasons you imply. The great injustice is that Israel was blamed falsely for killing a child, an allegation that spawned a tidal wave of propaganda and enmity against the Jewish state. The further injustice is that France 2, its Jerusalem bureau chief and its camera man have not been held accountable for unleashing the calumny.

It's unclear why you consider Soltani's heart-rending death "a similar moment." Obviously you're not suggesting this was a staged propaganda event.

We'd ask that you follow up the June 22 segment with a clarification that the shooting of Neda Soltani may become an emblem of the current Iranian turmoil — but that it differs completely from al Dura — which is an example of the way false images are employed to promote political causes and incite hatred.

Thank you for your attention to this and we look forward to hearing from you with regard to setting the record straight as soon as possible.

On June 30, Steve Capus, President of NBC News, responded claiming CAMERA had mischaracterized Richard Engel's statements and we were trying to "discredit" him. He said the reporter is "brave" and has won "every single major journalism award." Capus said "If you were truly dedicated to advancing journalism, you would be going out of your way to praise Richard for his work – rather than taking a cheap shot." He concluded saying, Mr. Engel is "a non-biased, dedicated journalist. NBC News considers itself lucky to have him."

Letter sent by CAMERA to Capus on July 7:

I appreciate your responding to my note about Richard Engel's June 22 statements. Unfortunately, you've not addressed the substantive issues raised. I objected to a factually false analogy made by Mr. Engel and you've answered by praising him generally and asking why I'm not grateful for your correspondent's reporting on other matters. I'd ask again that you consider the specifics of the concerns presented. They are not, in your words, a "cheap shot" or an effort to "discredit Mr. Engel."

They are an attempt to set the record straight on a serious matter.

Whether intentional or not, NBC has helped spread misinformation on a highly controversial subject, Muhammad al Dura, and has wrongly equated the discredited account of the Palestinian boy's killing to the actual murder of Neda Agha Soltani in Teheran. Contrary to the NBC report, the two events are not "similar." One was bogus -- as underscored by extensive documentation -- and the other was true. One was an exploitation and manipulation of imagery to incite hatred and violence while the other was an unstaged image of an actual event.

As journalists, you are surely not arguing there is no difference between an event that actually occurred and one that was staged.

Moreover, to say Al Dura became a "symbol of injustice" is to further mislead viewers. As noted previously, the injustice was Israel being libeled and millions of people being deceived into believing al Dura had been shot by Israeli soldiers. (Again, as noted, ballistics experts and others have concluded it would have been impossible for Israeli soldiers who had an obstructed view of al Dura to have shot him.) The harm done by the al Dura case in distorting world opinion, in inciting violence against Israelis and in thwarting peaceful relations is incalculable.

Rather than furthering public confusion and misunderstanding on the matter, NBC would better serve its viewers by airing a program on the full story of al Dura and its tragic consequences. Such a program would dispel any misconceptions purveyed. We again urge you take measures to correct the record, whether in a statement of clarification or in a corrective story.

Thank you once more for your consideration of these matters,
Andrea Levin