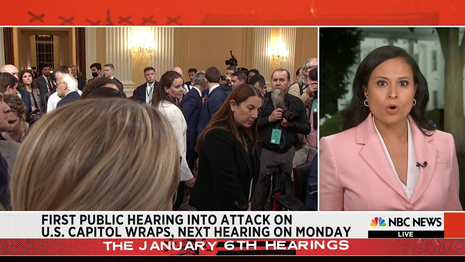 The preliminary broadcast network ratings are in for last night’s January 6 committee hearings, and they paint a disappointing picture for Democrats and their media pals.

Based on the most recent ratings data, January 6 hearing coverage on broadcast networks (ABC, CBS, and NBC) drew significantly smaller audiences than those networks’ own evening newscasts generally do on a standard weekday. Evening newscast audiences on any given night last week were 1.6 times larger than the total number of broadcast viewers who tuned into the hearings on Thursday.

Contrast the above ratings with those for the same networks’ evening newscasts for the week of June 1, which averaged 5.92 million viewers per evening.

In the case of ABC, World News Tonight attracted 70 percent more viewers on any given night last week than the Thursday night hearings did. On NBC, audiences were 80 percent larger for Nightly News than they were for the hearings, while for CBS Evening News the advantage was a more modest 32 percent.

Perhaps CBS morning host Tony Dokoupil was right when he proclaimed on Friday morning: “Obviously, January 6 is the big story today.” But based on the numbers, it certainly wasn’t the big story last night.

For the sake of comparison, here are the figures cited in this story presented in a more digestible format: