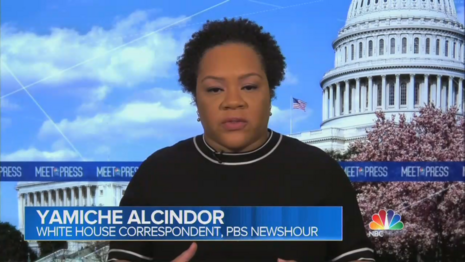 Like so many of his colleagues, NBC’s Chuck Todd continues to offer a platform for the lie that Georgia’s election security bill is a racist tool meant to disenfranchise nonwhite voters. On this week’s Meet The Press, Todd led a panel discussion about that new law, in which PBS NewsHour correspondent Yamiche Alcindor compared its enactment to the death of George Floyd.

Basically what we are seeing that happened in Georgia, with the Republican legislation, is that they are corking the bat and putting resin on the ball. They are cheating. They were the ones that created the current, existing laws on the books. The Secretary of State of Georgia certified that there was no cheating, that this was actually a certified election. And now, because they didn’t like the fact that young people, people of color, African Americans, Latino, Asian, came out, flexed their muscle, said that they were going to have a different direction for Georgia, they’re changing the rules. And that’s just not right.

Later in the segment, Todd read from a Los Angeles Times piece by ultra-progressive LZ Grandson, which clumsily attempted to link the Georgia law to the trial of former-police officer Derek Chauvin. Alcindor agreed: “Well, the Chauvin trial and that murder trial in the death of George Floyd is connected to voting rights.”

At the end of the day it’s about how African Americans and whether African Americans are allowed to survive and thrive in America, and are able to have access to the principles that America holds up as near and dear, and that of course is democracy. But it's also your ability to pursue happiness and not have an officer kneel on your neck for nine minutes and 29 seconds. Watching this trial and watching what's going on in Georgia, they absolutely connect.

National Review editor Rich Lowry pushed back against the framing of the Georgia law by Democrats (and most of the media) as tool of voter suppression. “I think the attack on this Georgia bill is an outrageous smear,” he remarked, adding: “It increases early voting hours. It tries to deal with the problem of long lines.”

Todd spared the three opponents of the bill on his panel from having to respond, and he wrapped up the segment.