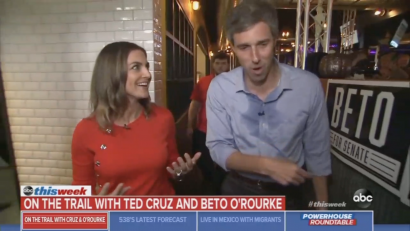 As the midterm elections approach, TV news hosts have abdicated their role as reporters to become partisan cheerleaders, inundating the airwaves with portrayals of Democratic candidates as lovable celebrities. The same media who relentlessly hammered Republicans with 88-percent negative midterm coverage have stubbornly refused to cover Democratic scandals, while praising their favorite candidates as “rock stars.”

A recent MRC study looked at broadcast news coverage of six prominent Democratic candidates embroiled in scandal, and found that even Senator Robert Menendez’s (NJ) improper acceptance of gifts received less than a minute’s worth of airtime on ABC, NBC, and CBS combined. The majority of the other scandals – including Texas Senate hopeful Beto O’Rourke lying about his DUI arrest – were ignored entirely.

Another study found a clear anti-Republican bias in broadcast midterm coverage (88 percent negative, compared to 53 percent negative for Democrats). Though the sample was small, that analysis found an absurd 100 percent positive spin in airtime spent on O’Rourke — while coverage of his opponent, incumbent Republican Ted Cruz, was 86 percent negative.

All the while, the media have fawned over the likes of O’Rourke, Andrew Gillum (FL), and Stacey Abrams (GA), furnishing softball interviews and hailing them as “rock stars” and “the rising stars” of their party. So stark is the contrast in coverage of Democrats versus Republicans that one wonders whether the media now prioritize control of the House over even their own credibility.

Watch the video below for a sample of the media’s unabashed excitement about their favorite Democratic candidates:

The “rising star” label has seen so much use that it no longer conveys much meaningful information, beyond serving as a vague term of praise. Congressman Julian Castro, a frequent recipient of the title, appears to have been a rising star for nearly a decade. On July 13, 2010, CNN host John King teased an interview with the then-mayor of San Antonio in the following fashion:

When we come back, "One-on-One" with a rising star in the Democratic Party. He leads a city that is on the cutting edge of the big demographic changes sweeping across America, the rise of Latino power, how it impacts immigration and other issues. San Antonio's mayor when we come back.