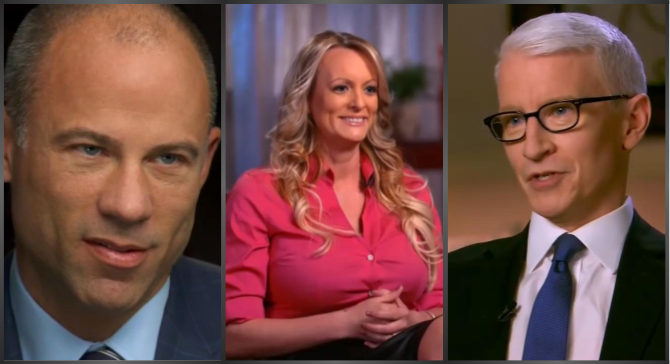 More than half of those interviews (74) were on CNN, which almost certainly makes Avenatti the most ubiquitous guest in the network’s history. No guest — not Donald Trump or Bernie Sanders in 2016, nor Adam Schiff in 2017 — received anything close to the outpouring of free media coverage that CNN has bequeathed to Avenatti.

The media’s massive donation of publicity is obviously the main reason why Daniels and Avenatti have been able to use a crowd funding site to raise a whopping $500,000 to fund their anti-Trump lawsuits, with many of the thousands of anonymous donors citing the interviews as they make their gifts.

The latest Media Research Center study tallied all of Avenatti’s interviews on national news programs from March 7 (when the publicity first began) through May 15. While CNN has been the friendliest network, hosting the Trump-bashing lawyer an astonishing 74 times, MSNBC has been close behind, donating 57 segments featuring Avenatti.

On a single day (May 3), MSNBC featured Avenatti a stunning seven times — from 7am ET (Morning Joe) through 10pm ET (The Last Word).

Rounding out the tally were interviews on ABC (six), CBS (five), NBC (four) and the Fox News Channel (just once, on FNC’s Fox News at Night back on March 20).

CNN’s Anderson Cooper 360 and MSNBC’s The Last Word with Lawrence O’Donnell were the most smitten with Avenatti, interviewing him the most of any program (20 times in the case of Cooper, 16 in the case of O’Donnell). CNN's New Day with Chris Cuomo and Alisyn Camerota came in third with 13 inteviews, just beating out CNN Tonight with Don Lemon and MSNBC's Deadline: White House, which hosted Avenatti 12 and 11 times, respectively. 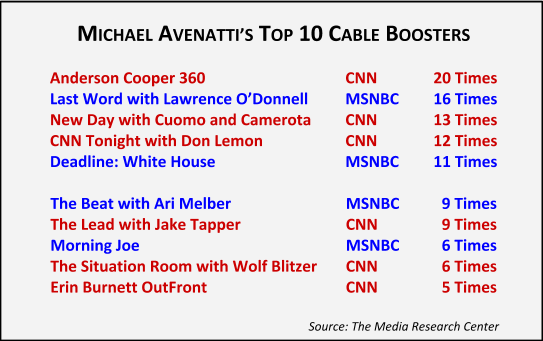 To help put CNN’s news priorities in perspective, the network’s 74 interviews with Avenatti during those ten weeks are vastly more than those given to any other newsmaker during an equivalent time period. For example, when Donald Trump was seemingly everywhere during the 2016 primaries, CNN interviewed him a total 30 times during his busiest ten-week period (from January 4 through March 16, 2016) — barely 40 percent of what they’ve handed Avenatti.

At his peak popularity as a CNN source, between May 3 and July 11, 2017, Representative Adam Schiff (the ranking Democrat on the House Intelligence Committee) was interviewed by the network a total of 25 times, barely one-third of Avenatti’s total. And at his high-water mark during the 2016 primaries, left-wing presidential candidate Bernie Sanders was booked on CNN a total of 18 times (from January 31 through April 11, 2016). 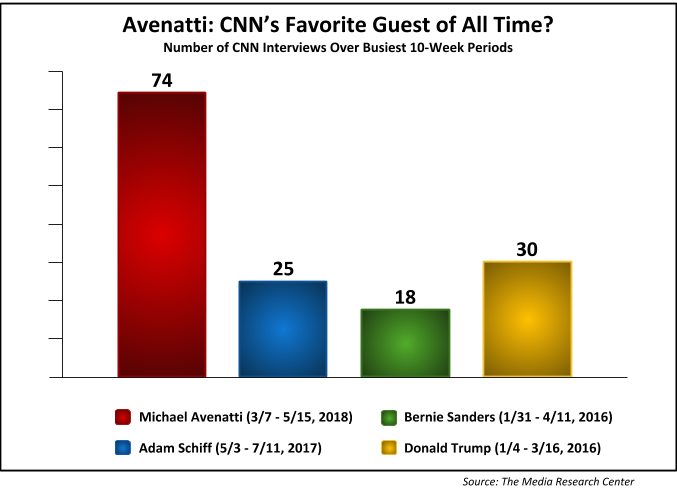 There’s no guest in CNN’s recent history who has been given as much free media exposure by the network as Avenatti has been granted. Based on interviews as of May 10, the Washington Free Beacon’s David Rutz estimated that the media’s open-door policy for Avenatti would be worth roughly $175 million if the lawyer had to pay for the airtime himself.

But the benefits to the case are even more tangible, as many donors to the campaign page on CrowdJustice.com specifically cite Avenatti’s media interviews, as well as those of Daniels herself, as a reason for their gift.

“I watch all the TV interviews you do. You are both so amazing and I am rooting for you every day!!!!” one donor wrote on the site. “Just saw the 60 Minutes interview, and I’m pledging a second week’s worth of allowance. I believe you, Stormy,” gushed another.

“Tell Michael to mention this crowdjustice.org [sic] on every TV appearance I never heard of it until May 8 on Rachel Maddow,” one patron instructed. Another contributor who had evidently watched the same program announced a gift of $100: “Thought about giving before. Michael Avenatti’s appearance on the Rachel Maddow show reminded us to do just that.”

CNN viewers were also stimulated to open their wallets to the cause: “What a cool interview with Anderson Cooper. I hope you’ll win the trials. Hope it will help getting rid of Trump.”

Avenatti has apparently gotten very chummy with some liberal anchors. On April 29, MSNBC’s The Last Word host Lawrence O’Donnell (who’s had Avenatti on his 10pm ET program 16 times in the past ten weeks), joked with AM Joy host Joy Reid: “Michael Avenatti is becoming my co-host. I’ve got to say.” Reid, who has hosted the lawyer four times on her show, chimed in: “He’s good.”

In one of his many appearances on CNN, Avenatti last week crowed to host Anderson Cooper that the media’s generous contribution of airtime was helping him: “There’s been some criticism about our media strategy and how often I’ve been on CNN... Here’s the bottom line, Anderson. It’s working. Okay? It’s working in spades....Because we’re so out front on this, people send us information. People want to help our cause.”

There’s no conservative lawyer in the universe who could ever expect to get even half as much free airtime to bash a liberal President. The media’s massive donations to Daniels and Avenatti can only be explained by their shared interest in making life as miserable as possible for President Donald Trump.

The fact that the duo have built a fund-raising scheme to capitalize on all of this exposure should make these liberal networks reconsider if they’re really in the news business any longer.