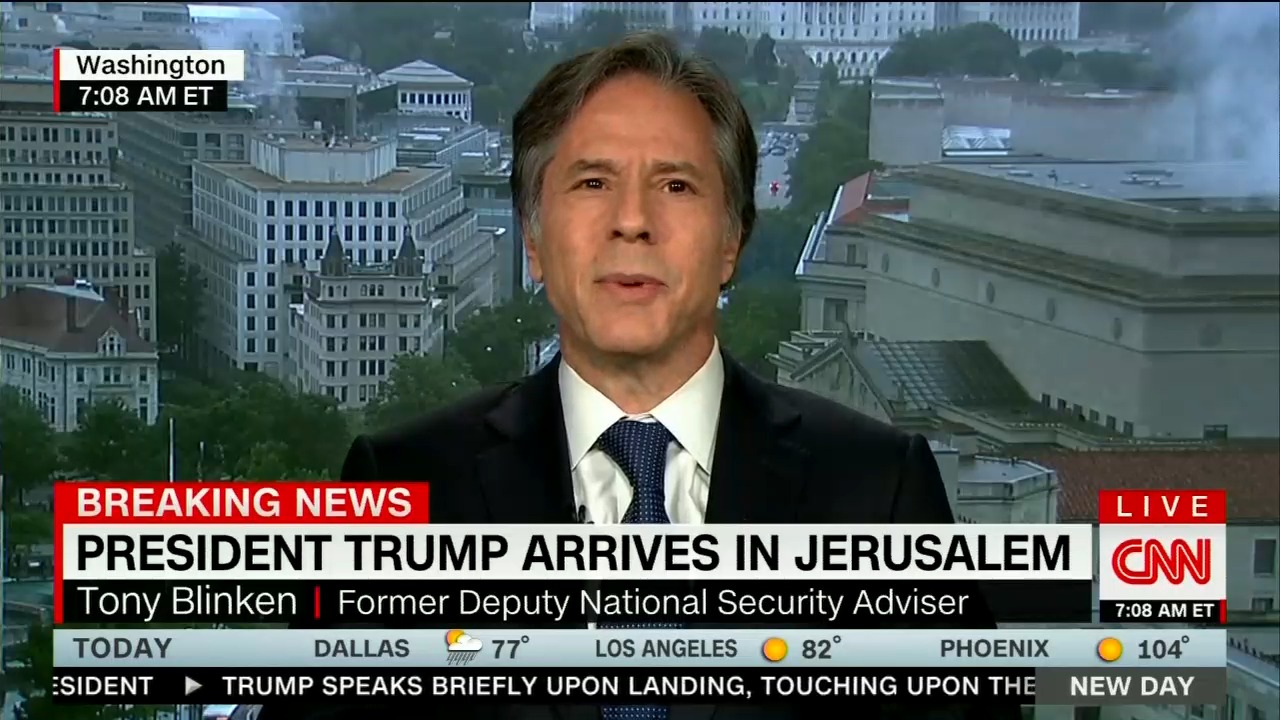 With President Trump visiting Israel Monday, the media have been pushing the narrative that President Obama was Israel’s protector, literally (see headlines below).

On Tuesday, CNN political analyst David Gregory and global affairs analyst Tony Blinken were eager to assert that President Obama was Israel’s greatest ally in regard to security.

“We should hasten to point out that while there may have been frayed relations, that bond from the security point of view and a political point of view was still extremely strong between the Obama administration and the administration of Bibi Netanyahu in Israel,” Gregory confidently affirmed.

When asked why the relationship between the Obama administration and Israel was so “fraught,” if they were tight in defense matters, Blinken said it simply came down to Israel’s “settlement policy.”

This sentiment has been repeated for years by the media. Just look at some of these headlines:

“Israelis cheered for Trump. But they may miss Obama more than they expected” – Washington Post

“Believe it or not, Barack Obama had Israel's best interest at heart” – The Guardian

The narrative is completely false. Although the Obama administration signed defense deals with Israel, so has virtually every presidential administration.

What the media do not want to talk about is how the Obama administration orchestrated a disastrous Iran deal that paves the way for Iran to develop a nuclear weapon and fills the regime with cash to spend on their military and international terrorism. Iran keeps their nuclear infrastructure and receives billions in cash and economic opportunities in a deal where restrictions expire in 10-15 years. In other words, Iran will be flush with cash and ready to build a bomb as soon as the deal expires, if not before then. Iran has been known to violate agreements. And as everybody knows, Iran publicly declares on a regular basis: “Death to Israel. Death to America.” Fred Feliz wrote a great article about the deal in National Review and House Majority Leader Kevin McCarthy released a statement with 21 reasons explaining why the deal is bad. President Obama appeased a country that has a stated goal of exterminating the Jewish state.

Furthermore, Obama gave $221 million dollars to the Palestinian Authority in his last days in office.  A “government” that indoctrinates its children to believe that Jews are evil and encourages terrorism.

What also is completely ignored is the previous administration’s harmful rhetoric equating Israel with Palestine when it is the Palestinians who are hell-bent on destroying Israel. Israel accepts all who intend to live peacefully with one another, while Palestine is seeking the destruction of Israel. President Obama as the leader of the free world, used his influence to shame Israel and prop-up Palestine, endangering Israel’s security.

Obviously, it is easy to see why Gregory’s claim that Obama was a political ally is even more egregious than to say he was a security ally. This is without even mentioning his betrayal at the U.N. in December.

The press has bent over backwards in an attempt to make it appear that Obama was Israel’s “protector,” but even the slightest amount of independent thinking reveals that is false.

The more complete transcript is found below:

DAVID GREGORY: Well, you see a highly choreographed visit to Israel by an American president who is making it a priority and is really saying to the Israelis that this is going to be a centerpiece of his foreign policy and his security policy and the Israelis are happy to have it. Particularly because they are trying to turn the page as we watched the two of them go through the official president’s residence and maybe making comments or signing the guest book there at the beautiful residence there for the President in Jerusalem. But resetting that page to say that this is a new day and new administration. There’s going to be a different kind of relationship between the United States and Israel. After the fraught relationship as Tony Blinken can speak to between Israel and the Obama administration. We should hasten to point out that while there may have been frayed relations, that bond from the security point of view and a political point of view was still extremely strong between the Obama administration and the administration of Bibi Netanyahu in Israel. But, nevertheless, you have two leaders now that are more aligned on the question of Iran. Who are even more aligned on the question of fighting terrorism more generally and I think that will all play out as the day goes on.

JOHN BERMAN: What we are watching is President Trump signing a guest book there. He is about to meet with the Israeli President Rivlin and Tony Blinken, symbolically President Trump is a most welcome guest, right now. Most welcome to say the least inside Jerusalem. The city that President Rivlin called the beating heart of Israel. It is a city that the president of Israel is very excited to show off to Donald Trump this morning. What are you watching for?

TONY BLINKEN: Well, I think David has it exactly right. On the one hand there was a fraught relationship between the Obama administration and Israel. On the other hand, where it really mattered, Israeli security, the relationship was probably never really closer. The previous administration, the Obama administration, did more than any previous administration. The iron dome missile defense system, the F-35 fighter, the largest defense assistance package in history, $38 billion over 10 years, and having Israel’s back in all theses international organizations. I think the President is to be commended, President Trump, for putting the focus on the Middle East peace. To try to get the parties engaged and talking again. That’s a good thing. But we shouldn't underestimate the difficulty. They are far apart on the core status issue. Security, border, refugees, and especially Jerusalem. That’s going to take a very, very heavy lift and the politics on both sides, on the Israeli side and the Palestinian side are not moving in the direction of some kind of settlement. So we shouldn’t expect any quick results from this. But the fact that the President is engaged on this and he’s putting a focus on this, is a good thing. If you can get people talking again, that’s better than the alternative.

ALISYN CAMEROTA: And Tony, before we get to A.B., I just want to have you expand on that a bit, because why was the relationship with President Obama so fraught? We heard Christiane Amanpour say that there is a feeling on this trip of ABO, anybody but Obama. So people are welcoming, you know, even in Saudi Arabia. People are welcoming President Trump because they are so happy to have this turn of a page. So, just give us a little bit more context on what had gone wrong and what President Trump can now fix.

BLINKEN: Look Alisyn, I think the differences are well known and on sustenance, it primarily had to do with Israeli settlement policy. And President Obama took a strong stand against that and urged that it stop. And then of course, on a personal level, the relationship between President Obama and Prime Minister Netanyahu [slight giggle] was not among the best. On settlements, unless and until something can be done to really halt this process, then the idea of actually getting to a final piece is going to be, if not impossible, very, very difficult. And here's where we are, the point with the settlement policy that if it continues much longer, the idea of a Jewish democratic Israel will be gone. It will be impossible for Israel to be both Jewish and democratic if it continues to try to have dominion over this increasing and growing Arab and Palestinian population. So it has to make a choice. President Obama was putting his finger on that choice. It is something very uncomfortable for Israelis. Of course, they need a coherent partner in the Palestinians to negotiate. They haven’t had one in a long time.