Chris Hayes told New York magazine recently he doesn't intend to have any "hacky partisans" on his weekend MSNBC show that debuts September 17.

But the NewsBusters archive reveals a trove of evidence demonstrating that the Washington editor of the left-wing Nation magazine could only live up to that standard if he banned himself from his own show:

On the now-cancelled "Countdown" with Keith Olbermann, the former MSNBC anchor and Hayes once considered the extent to which Fox News Channel has "moral culpability" for what they saw as "increasingly violent rhetoric" coming from conservatives: 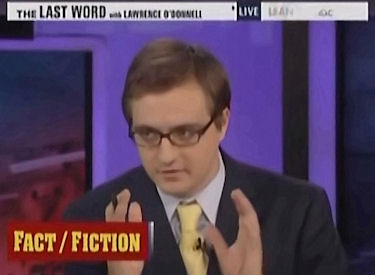 The Countdown host brought aboard Chris Hayes of the left-wing the Nation magazine, who charged that there is 'moral culpability' from Fox News for 'increasingly violent rhetoric' on the right. Hayes: 'There is increasingly violent rhetoric. And we know from the Southern Poverty Law Center's latest report, we know from the Harris Poll, this stuff is really seeping into the grassroots, and there is a really kind of enraged and violent ethos that is being stoked. And I think it really is problematic, and it does, it does impart some kind of moral culpability ultimately.'

Perhaps Hayes liked appearing on "Countdown" so much because he was angling for Olbermann's anchor chair. After all, Hayes, whose wife worked for the Obama administration, got his shot to fill-in for the suspended Olbermann, though his undisclosed donations to Democrats ensured his tenure was short-lived. The Wall Street Journal reported:

Chris Hayes, tapped Friday by MSNBC to fill in for the indefinitely suspended Keith Olbermann as host of the prime-time political show ‘Countdown,’ gave money to two Democratic campaigns in recent years. Now, following that disclosure, MSNBC says Mr. Hayes won’t get the gig after all.

More recently, Hayes, at the height of the Anthony Weiner Twitter scandal, dismissed the incident that would end in Weiner's resignation and hoped the media would just stop covering the Democratic congressman's lurid photographs completely:

The other part is that I think it's just this calculation of, either this should end or he should shut up or we should just move on. I think the impulse is to stop talking about Anthony Weiner, which I think is an impulse that Lord, I share, and I hope most of the country does at this point, that that, you know, just cut it off at the pass and maybe this, then we'll move onto something else.

As NewsBusters' Noel Sheppard reported at the time, the JournoList controversy helped expose Hayes as a partisan flack who would stop at nothing to destroy Republican vice presidential candidate Sarah Palin:

As the attacks ensued, the Nation's Chris Hayes wrote, 'Keep the ideas coming! Have to go on TV to talk about this in a few min and need all the help I can get.'

President Barack Obama released his long-form birth certificate on Wednesday, but not even that could put the birther myth to bed for The Nation magazine's Washington editor Chris Hayes.

Guest hosting the April 28 edition of 'Last Word,' Hayes seized the moment to equate those who believe the president was not born in America with those who exercise healthy skepticism about anthropogenic global warming.

'The issue of the president's origins is one thing,' began Hayes. 'The reality of global warming is quite another. There seem to be the same dynamics at play in both.'

While it is anyone's guess who Hayes will tap as guests for his new show, his future viewers can rest easy knowing they'll get to watch at least one "hacky partisan" each weekend.