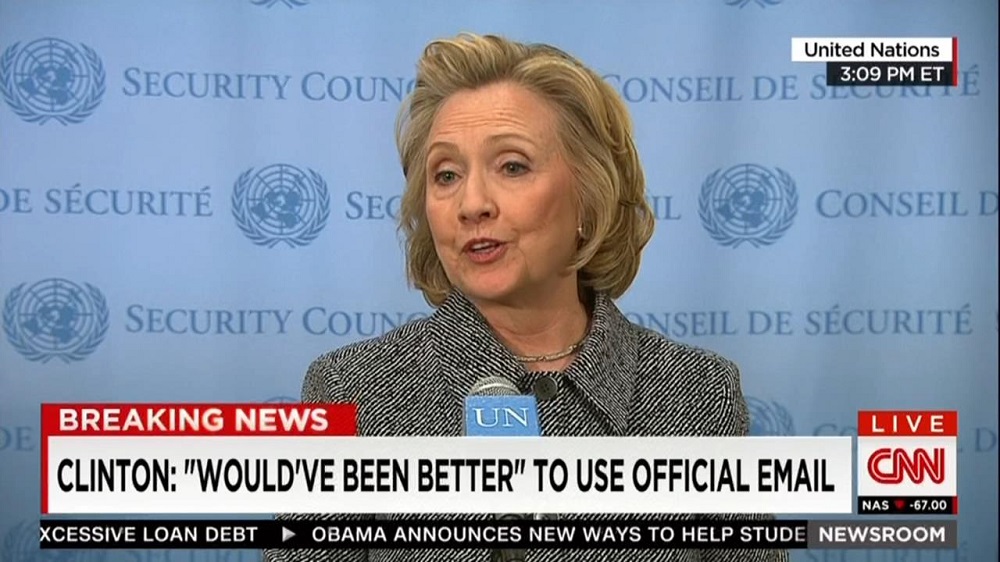 On Wednesday, Jack Gillum and Stephen Braun of the Associated Press fact-checked five of Hillary Clinton's claims about her e-mail scandal from her Tuesday press conference. Gillum and Braun spotlighted that Clinton is "the only secretary of state known to have conducted all official unclassified government business on a private email address," and pointed out her "striking departure from the norm...to rely exclusively on private email for official business."

The two correspondents began their article by highlighting the former senator's "others had done it" remark regarding her use of private e-mail account. Gillum and Braun first noted that "email practices varied among her [Clinton's] predecessors," and that "years earlier, when emailing was not the ubiquitous practice it is now among high officials, Colin Powell used both a government and a private account." The duo also included their lines about Clinton's "striking departure from the norm" and how she "conducted all official unclassified business on a private email address."

Gillum and Braun continued with the potential presidential candidate's assertion that she "fully complied with every rule I was governed by." They bluntly countered that "at the very least, Clinton appears to have violated what the White House has called 'very specific guidance' that officials should use government email to conduct business," and highlighted that the former first lady "provided no details about whether she had initially consulted with the [State] department or other government officials before using the private email system."

The AP journalists also zeroed in on Clinton's apparent double standard regarding State Department workers' use of private e-mail accounts to conduct official government work: "In 2011, when Clinton was secretary, a cable from her office sent to all employees advised them to avoid conducting any official business on their private email accounts because of targeting by unspecified 'online adversaries.'"

Later in their article, Gillum and Braun detailed how one of the former secretary's claims was particularly eyebrow-raising, especially in light of high-profile hacking incidents:

CLINTON: "It had numerous safeguards. It was on property guarded by the Secret Service. And there were no security breaches."

THE FACTS: While Clinton's server was physically guarded by the Secret Service, she provided no evidence it hadn't been compromised by hackers or foreign adversaries. She also didn't detail who administered the email system, if it received appropriate software security updates, or if it was monitored routinely for unauthorized access.

Clinton also didn't answer whether the homebrew computer system on her property had the same level of safeguards provided at professional data facilities...It was unclear what, if any, encryption software Clinton's server may have used to communicate with U.S. government email accounts.

Recent high-profile breaches, including at Sony Pictures Entertainment, have raised scrutiny on how well corporations and private individuals protect their computer networks from attack.

The correspondent also caught Clinton in a contradiction (at the very least) over her use of personal electronic devices. She claimed during the press conference that she "thought it would be easier to carry just one device for my work and for my personal emails instead of two. Looking back, it would've been better if I'd simply used a second email account and carried a second phone."

Gillum and Braun pointed out that just weeks earlier, the Democrat "told an event in California's Silicon Valley...that she has an iPad, a mini-iPad, an iPhone and a BlackBerry....She suggested she started out in Washington with a BlackBerry but her devices grew in number." They also disclosed that "smartphones were capable of multiple emails when she became secretary; it's not clear whether the particular phone she used then was permitted to do so under State Department rules."

Hours after the journalists filed their report, their employer, the Associated Press, filed a Freedom of Information Act lawsuit against the State Department. The press agency is aiming to force the diplomatic service to release "materials related to her [Clinton's] public and private calendars, correspondence involving longtime aides likely to play key roles in her expected campaign for president, and Clinton-related emails about the Osama bin Laden raid and National Security Agency surveillance practices."