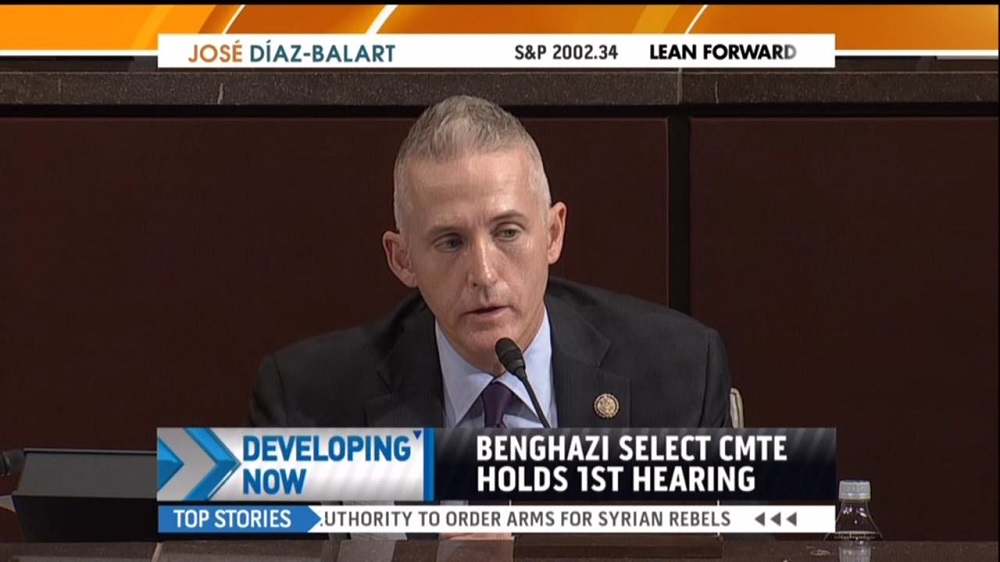 CNN and MSNBC viewers on Wednesday would have to switch channels if they wanted to watch the first hearing of the House Select Committee on Benghazi. CNN aired a 15-second news brief at the top of the 10 am Eastern hour, mere minutes before the nearly three-hour meeting began, but didn't cover the proceedings live. MSNBC set aside 12 minutes worth of segments to the event, and sometimes showed split-screen video, but didn't provide the audio.

By contrast, Fox News Channel provided nearly 41 minutes (40 minutes, 51 seconds) of live coverage of the congressional committee's hearing during the 10 am and 11 am Eastern hours. The media outlet also aired 25 minutes and 14 seconds of reporting, interviews, and panel discussion segments on the hearing.

Correspondent Joe Siedman zeroed in on the "surprising lack of the partisan bickering" during the select committee's hearing in a Wednesday article for NBCNews.com. Siedman noted "the subject of today's hearing: the recommendations of a review panel on enhancing diplomatic security of US facilities overseas," and outlined that "the committee heard the testimony of Greg Starr, the assistant secretary for diplomatic security; Mark J. Sullivan, the former director of the Secret Service; and Todd Keil, the former assistant secretary for infrastructure protection at the Department of Homeland Security."

The panelists' testimony apparently wasn't newsworthy enough for CNN and MSNBC (CNN president Jeff Zucker made it clear in May 2014 that his network wouldn't be "shamed" into covering the story). Instead, the CNN Newsroom program aired a five and a half minute segment on the investigation into the death of comedian Joan Rivers. Anchor Carol Costello also trumpeted "breaking news" on the NFL announcing a new drug policy, which includes new testing for human growth hormone and a revised standard for marijuana. Costello and correspondent Andy Scholes devoted a two-minute segment to the sports news.

On MSNBC, anchor Tamron Hall devoted nearly a minute to the controversy surrounding the NFL pulling a track by singer Rihanna, in the wake of the Ray Rice domestic abuse scandal on the NewsNation program. The liberal news outlet also set aside over 13 minutes to the Rice and Adrian Peterson scandals, as the select committee's hearing was underway. Six days earlier, MSNBC ignored the two-year anniversary of the September 11, 2012 terrorist attack which killed four Americans.