After failing to mention the upcoming midterm election a single time since he took over the anchor desk of ABC's World News Tonight on September 1, on Monday, David Muir finally informed viewers that a political contest with "enormous" stakes was just days away: "The countdown is on, this evening, to the midterm elections tonight. Your voice, your vote. Just eight days to go before this election. The stakes? Enormous. President Obama, already battling with a Republican House, will he soon face a Republican Senate?"

It had been 137 days since the ABC evening newscast had made any mention of the 2014 midterms. The last story on the campaign occurred on June 11, when Muir – coincidentally filling in for then-World News anchor Diane Sawyer – reported on House Majority Leader Eric Cantor losing his Virginia congressional primary to candidate Dave Brat.

From that date until Monday, World News and World News Tonight (renamed on September 1) were completely silent on the midterms.

In stunning contrast to the single election story the evening show ran from September 1 to October 27 in 2014, during that same time period in 2006, ABC's World News Tonight provided 51 midterm stories. That included 27 full reports on the topic and 24 reports mentioning the campaign.

As a recent Media Research Center study concluded, when the prospects of a Democratic electoral wave were high in 2006, the networks provided wall-to-wall coverage. However, with Republicans seemingly poised to make big gains in 2014, the networks suddenly lost interest in politics.

Here is a full transcript of the October 27 World News Tonight report on the 2014 midterms: 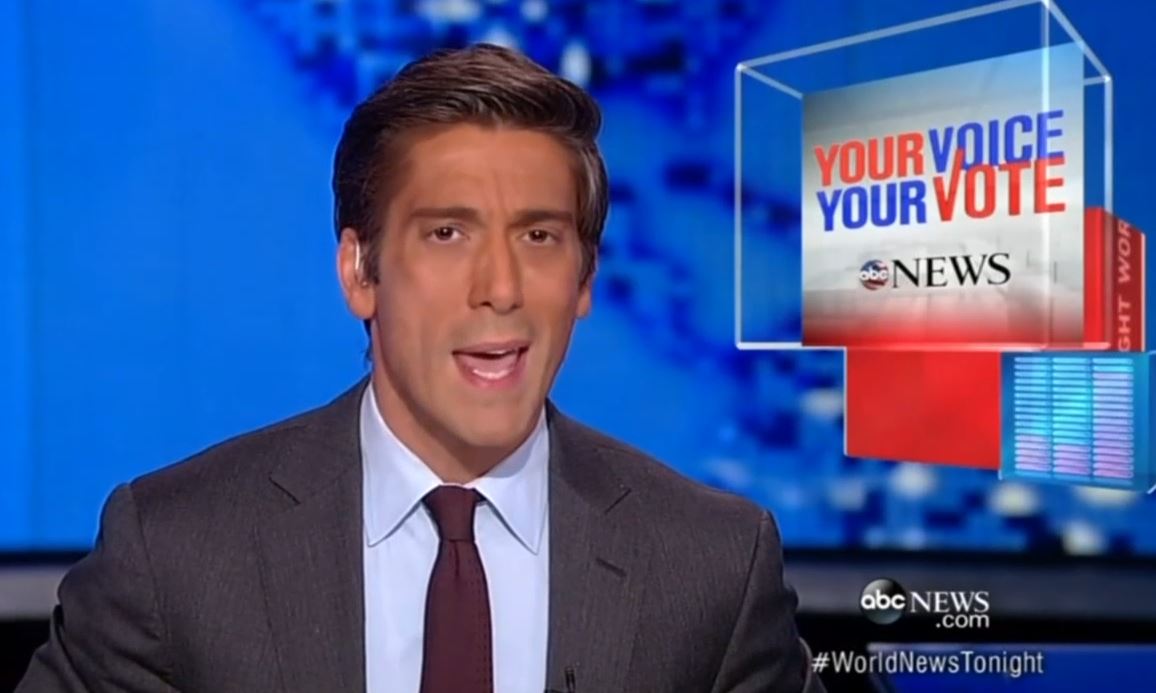 DAVID MUIR: The countdown is on, this evening, to the midterm elections tonight. Your voice, your vote. Just eight days to go before this election. The stakes? Enormous. President Obama, already battling with a Republican House, will he soon face a Republican Senate? Tonight, our new number here tonight revealing where this could be headed and something else. Look at the wall tonight, a political “who's who” out there on campaign trail. Former President Bill Clinton in Colorado tonight. Former President Jimmy Carter campaigning for his grandson in Georgia. New Jersey Governor Chris Christie in Florida. Former presidential candidate Mitt Romney is in Nebraska and Hillary Clinton campaigning in New York. You might be saying at home, it seems everyone's out there, but someone is not. Why was President Obama at the White House this Monday? Let's get right to ABC's chief White House correspondent Jonathan Karl and Jon, what do you make of this?

JONATHAN KARL: Well, David, the President was home all weekend, too and today, the only time he ventured out was to go to Sasha and Malia's school for parent-teacher conferences. So, what's going on? Well, the President's approval rating is at an all-time low. Just 40 percent and in many of the states with the big races, it's even lower. So, while the President will be out campaigning for some candidates for governor this week, you won't see him in a single place with a competitive Senate race.
MUIR: And Jon, you and I were talking earlier, we've seen second term presidents with low approval ratings before, but you went digging for George W. Bush's schedule on this day back in his second term?

KARL: That's right and Bush was even more unpopular than President Obama, but on this day, eight years ago, he was out campaigning in two different states, traveling in more than 2,000 miles and was out virtually every day in the home stretch.

MUIR: And, Jon, you heard me mention there that the stakes here for the President. The Senate could flip. Republicans are confident. How is it looking tonight?

KARL: Well, numbers guru Nate Silver, founder of FiveThirtyEight, our analyst, he puts the percentage chance of Republicans taking over at 63% and I've got to tell you, David, privately, many Democrats would say that's about right.

MUIR: Alright, Jon Karl at the White House and we will have complete election night coverage one week from tomorrow night, right here on ABC.