Liberal constitutional law expert Laurence Tribe may be one of the men who inspired President Obama politically, but he strongly disagrees with his power grab regarding EPA regulation now, and so all bets are off as far as the Daily Beast's Eleanor Clift is concerned.

In a story headlined "Obama's Mentor Hates Your Lungs," hyper-liberal journalist-cum-Democratic president apologist Eleanor Clift savaged Tribe for "tossing hand grenades into President Obama’s efforts to tackle climate change." She continued by hyping Tribe's position as though it were some kind of craven political betrayal greased by the siren song of fat-cat industrialists (emphasis mine):

Tribe mentored the young Obama and taught him constitutional law at Harvard, so it was a shock to hear him testify last month at a hearing of the House Energy and Power committee that Obama’s plan to gradually reduce pollution from coal-burning plants was the equivalent of “burning the Constitution.” In the same hearing, Tribe tried to distance himself from McConnell, calling the GOP leader’s “just say no” strategy on climate change “reckless” and “irresponsible.” 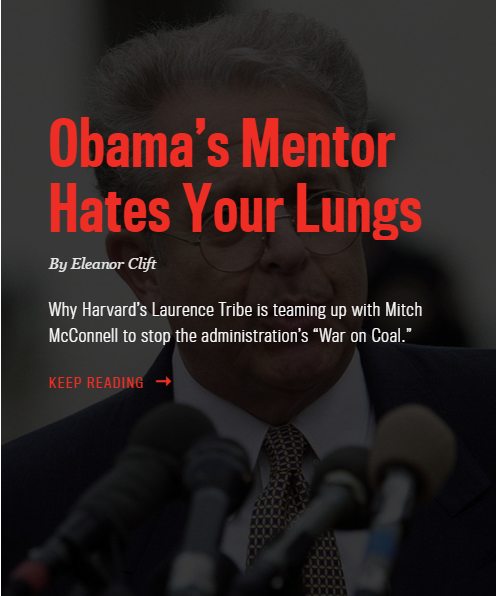 In a lengthy email, Tribe says he had misgivings about the EPA regs when he first became aware of them late last year. He says this occurred well before he was retained by Peabody Energy, the largest coal company in the world and one of McConnell’s biggest campaign contributors, “and long before I knew anything about McConnell’s position or had any idea how, if at all, he might react to mine.”

Tribe’s financial relationship with Peabody Energy makes him more than a dispassionate legal scholar, but that shouldn’t matter, says Don Stewart, a spokesman for McConnell. “I don’t think that takes away from the constitutional argument that exists,” he says, noting that conservative lawyer Ted Olson “changed his view after he was hired by a pro-same-sex marriage group. I don’t think anyone’s screaming about that. Lawyers are lawyers.”

McConnell’s views on coal are well known. He won reelection in Kentucky promising to fight Obama’s “war on coal.” Tribe says McConnell tried to “wrap himself around my legal position” and “take advantage of my liberal street-cred” when the Kentucky senator realized the two agreed on Obama’s alleged overreach.

Despite his protestations, Tribe is quite a catch for McConnell and the pro-coal lobbyists fighting EPA in Washington. In a letter last month to all 50 of the nation’s governors, McConnell urged the states to defy the administration and refuse to produce a plan to reduce greenhouse gases under the EPA’s Clean Power Plan Rule that was put forward last year.

Noting that he defended the legality of Obama’s executive actions on immigration, health care and gay rights, Tribe says he “wasn’t going to clam up just because I admire and have worked with this President and have known him and liked him a great deal ever since he was my law student and research assistant back in the late 1980s.”

Tribe will be one of the lawyers arguing the case against the EPA’s climate regulation in the U.S. District Court. Two of his Harvard Law School faculty colleagues, Jody Freeman and Richard Lazarus, write in a Harvard Law journal that the coal industry has “shrewdly hired Larry Tribe…perhaps the nation’s most famous constitutional law professor.” Still, they call his arguments about unconstitutionality “baseless. Were Professor Tribe’s name not attached to them, no one would take them seriously.”

What the courts will do is hard to predict, but having the liberal Tribe weigh in on the conservative side could tip the scales of justice.

So let's review. Tribe is in Obama's corner on most issues but has dared to make common cause with Republicans on a legal matter, so now all of a sudden his constitutional arguments are complete poppycock and the only reason his arguments should impress any jurist in his right mind is because of the celebrity factor of Tribe's name?

Sounds like Clift is scared to death that the courts may once again smack down an Obama executive overreach.