Abstinence, to the media, is an alien topic – but now there’s a new specimen to examine: Russell Wilson.

Seahawks quarterback Russell Wilson revealed that he and singer Ciara are abstaining from sex while dating, in a recent interview. During a segment on Good Morning America July 8, ABC correspondent Paula Faris gave the couple a “kudos” for “holding on to core values.” But others in the media criticized them, from an ESPN host calling abstinence “stupid” to The Daily Beast claiming the couple are only “hurting” themselves.

26-year-old Wilson is divorced, while 29-year-old Ciara has a son with her ex-fiancé, rapper Future.

GMA co-host Robin Roberts introduced the “superstar couple” who were “making headlines for what they’re not doing,” before turning to Faris for the full story.

“Russell Wilson says God spoke to him asking him to ‘lead the relationship Jesus' way’ and ‘take all that other stuff off the table,’” Faris said. “Well, if you haven’t noticed, his girlfriend Ciara, she’s super-hot, and he says that their decision has not been easy.”

Faris played video clips of the Christian athlete as he explained his decision with Ciara.

“Now I know a lot of people make this decision, it’s not about being traditional or old-school it’s just about holding on to core values that don't change whenever the wind blows,” Faris concluded. “So kudos to them because it's not going to be easy.”

Earlier in her report, Faris highlighted Wilson “sparking a nationwide conversation” and pointed to a “Twitter battle” between ESPN commentators.

During ESPN’s “Highly Questionable,” co-host Bomani Jones bashed, “I don’t believe [Wilson], because I don’t think that either one of them looks especially stupid.” He argued that Wilson didn’t deny sex with Ciara before his “epiphany” and joked, “We’ve heard that one before.”

In Wilson’s defense, ESPN analyst Chris Broussard later tweeted at Jones, “regarding Russell/Ciara, u implied people trying 2 do it Jesus’ way by waiting till r stupid.” 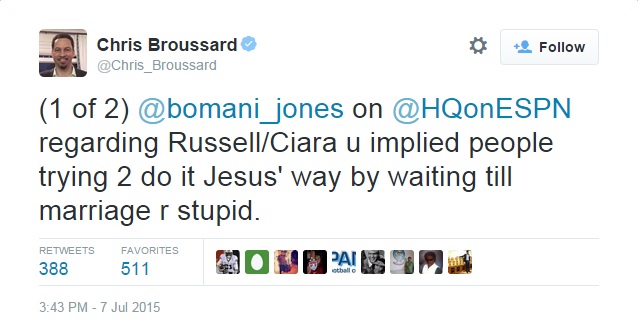 “[U] owe all Bible-believing Christians trying to live as Russell/Ciara are an apology,” Broussard continued. “if u criticized the sex attitudes of any other group you'd b criticized intensely. Why do u feel free to criticize Christians?” 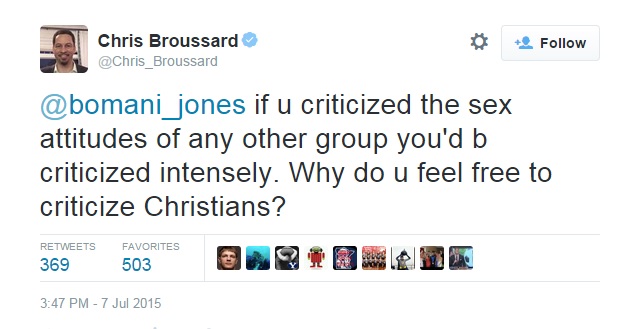 In a horde of tweets, Jones responded that Wilson’s decision was “…about controlling women” and continued, “i think americans value chastity in a way i find silly, problematic and, ultimately, counterproductive. i don't apologize for that.” 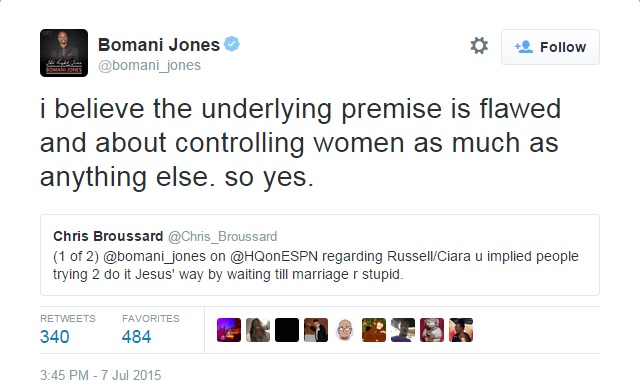 Other online media also poked fun at or criticized Wilson.

For Gawker’s Deadspin, Barry Petchesky joked that, “Just Like You, Russell Wilson Is Not Having Sex.”

“The coupling they could make together would make whatever shapeless, bleating thrusts you’re capable of look like two hefty bags settling on a curb,” Petchesky wrote. “But that doesn’t matter because sex is merely an academic point for you to be wondered over on a theoretical level.”

Also in humor, entertainment blogger Perez Hilton chimed in, “We're pretty impressed Russell Wilson hasn't scored a touchdown with the singer yet, because she is pretty smokin'! We just hope his footballs haven't turned blue in the process! LOL!”

The Daily Beast’s Amy Zimmerman noted about the abstinence move: “[A]s long as it’s not being used to monetize virginal jailbait, or marketed as an exclusive form of birth control, it's not hurting anyone (except Ciara and Russell Wilson).”

In contrast, Yahoo! Sports’ Eric Edholm commented, “cheers to a young man who is comfortable in his own skin to admit such a thing when it's easy to keep that to himself.”

“Wilson is outspoken in his faith and he told a very personal story to back it up. That takes guts, and it's not for everyone,” he said. “So please, lay off the guy a bit for putting himself out there, will you?”