While they often bash attempts to defund Planned Parenthood or restrict abortion, pro-choice actresses acknowledged the value of their mothers – mothers that gave them life – this Mother’s Day.

Some, like Girls’ creator Lena Dunham made “choice” front and center of her Mother’s Day wish. Dunham, a rabid abortion advocate and Planned Parenthood supporter, chimed in on the day – with an insert about “choice.” 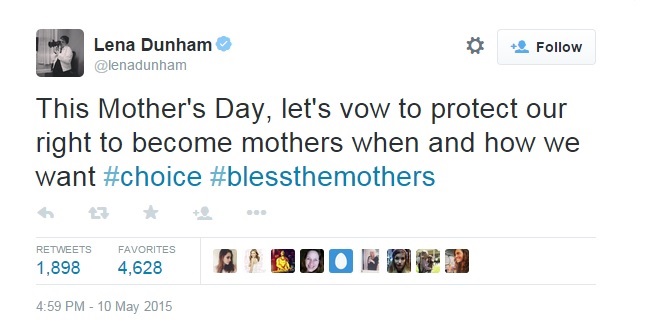 Likewise, comedian Amy Schumer, an abortion-jokester, sent out a public message to her mom.

“Happy Mother's Day. Thanks for keeping me!” she posted on Twitter alongside a picture of her mom reading to her as a child.

Although she once called unborn babies “goo,” comedian Sarah Silverman still appreciated her mother’s role. “HAPPY MOTHER'S DAY to my Momma, Beth Ann O'Hara,” she composed in a tweet.

A Lena Dunham and Planned Parenthood well-wisher, Sara Bareilles wrote, “Happy Mom's Day to everyone out there who lifts up and loves somebody. My mom let me learn to be myself by knowing I was loved. Thanks mom.”

A complainer about the “bullsh*t war” on abortion, Roseanne Barr tweeted a “happy mother's day” too.

Eva Longoria and Kerry Washington, who once showed support for abortion-giant Planned Parenthood and Roe v.Wade, also tweeted their gratitude.