NPR’s Steve Inskeep To Obama: Have The 2014 Midterms ‘Liberated You?’

President Obama sat down with Steve Inskeep, host of NPR’s Morning Edition, for an interview that aired on Monday, December 29 and was repeatedly tossed softball questions from the lefty reporter throughout their conversation.

Inskeep began the discussion by asking President Obama “since your party's defeat in the election, you have made two major executive actions — one on immigration, one on Cuba...Is there some way in which that election just passed has liberated you?”

As the end-of-year interview progressed, the NPR host brought up the president’s recent executive action on immigration and used it as an opportunity to trash the GOP's views on immigration reform:

Well, let me figure out if there's overlap on immigration. In an interview in August, you described the Republican Party as being "captive to nativist elements of the party.” What did you mean by that, and can you work with people who you think of in that way?

For his part, Inskeep did press the president on how race relations have worsened over the past six years but eventually returned to lobbing sympathetic questions at him. 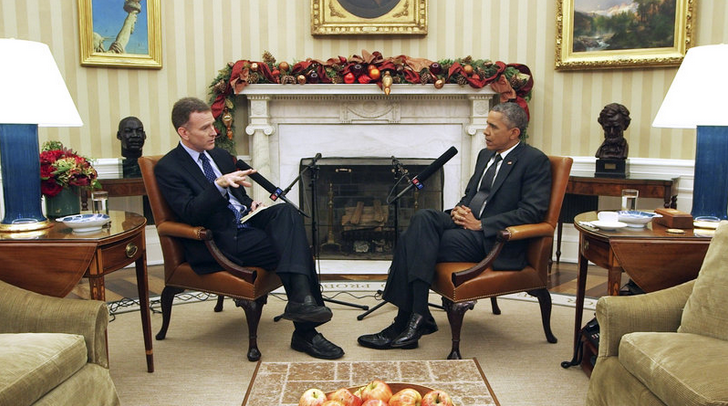 Let me ask a few questions, Mr. President, about America's place in the world and how you see it and how you'd like to move it if you can in the last couple of years that you have.

We're speaking at a moment after you've announced that you're restoring diplomatic relations with Cuba. You want to reopen an embassy there. Is there any scenario under which you can envision, in your final two years, opening a U.S. embassy in Tehran?

The NPR reporter went on to suggest that the United States should follow Hillary Clinton’s advice and empathize with our enemies:

That raises a word that I want to bring up that former Secretary of State Clinton used in a speech the other day. She was criticized for having empathy or understanding for even enemies around the world. There are, though, military people who use empathy for the enemy, by which they mean not sympathy but understanding the enemy so you can ...Do you feel that you have sufficient empathy for the Iranians, meaning do you feel you understand what it is they need to get a deal done and is it possible?

Inskeep is no stranger to gushing over President Obama and went so far as to compare the liberal Democrat to Abraham Lincoln during a 2012 interview with David Axelrod. More recently, the NPR host boosted socialist Senator Bernie Sanders for president.

The full transcript of the interview can be found here.