The award winning actress Lena Dunham has been in the news for a controversy over her memoir Not That Kind of Girl, in which Dunham claims to have been raped during her time at Oberlin College by someone identified as “Barry,” the campus conservative.

Breitbart’s John Nolte looked into the story and was unable to confirm it.   This in turn has caused another ruckus, with Dunham tweeting as follows and as reprinted by Nolte:

Dear @kmcdonovgh thank you for giving voice to what I could not say: http://t.co/zW9tiMPm6P

Some men are enraged by stories of sexual assault that don't have clear cut villains, pimps or men with guns...

That's because these stories force them to ask hard questions about their history with consent...

Well, we all have to ask hard questions. Grow the fuck up.

And I have some news for certain "news" outlets. No matter how much you thump your keyboards with your meat hands we will not stop talking.

Whether she was raped by someone else, I have no idea. But after the star of HBO’s “Girls” claimed in her book that she was coerced into sex by a Barry at Oberlin College, Random House is backing off.

“The name ‘Barry’ referenced in the book is a pseudonym. Random House, on our own behalf and on behalf of our author, regrets the confusion,” the publisher said in a statement to The Wrap. And Random House is willing to cough up legal fees.

Well isn’t this interesting? Ms. Dunham has had her own publisher back away from her charges. But there’s something else here that illustrates the idea that Dunham’s views on rape are, shall we say, situational.  And she isn’t alone.

Notice that first tweet above? That’s a Dunham hat tip to this piece by writer Katie McDonough over in the far-left site Salon, headlined:

The right’s Lena Dunham delusion: Anger, misogyny and the dangers of business as usual

National Review's screed on Dunham is abhorrent, but its misogyny is not unique. Here's where we go next

After taking after NR’s Kevin Williamson for having the audacity to criticize Dunham, McDonough writes towards the end that “we stop pretending that rape is an accident.”

Well isn’t this interesting. Not that they were noticing over at Salon.

Ms. Dunham has in fact already stopped talking about rape. When was that, you ask? The date in question would be January 13, 2013. Just last year on the night Dunham won the Golden Globe’s Best Actress Award. She was sooooooo excited. Why?  Here is her tweet:

The highlights of my evening (aside from the obvious) were Bill Clinton and Jodie Foster. Also seeing Adele turns out to be like seeing G-d

To prove the point of just how excited Dunham was there is video of the moment.  At 23 seconds in, as the former President who was graphically accused of rape by Juanita Broaddrick enters to a standing Hollywood ovation, Ms. Dunham is shown applauding furiously, her face in an open-mouthed happy glow.

So let’s once again (this has been discussed earlier in this space) go back to exactly just what it was Juanita Broaddrick said to NBC reporter Lisa Myers of the man Dunham was so ecstatically cheering on. 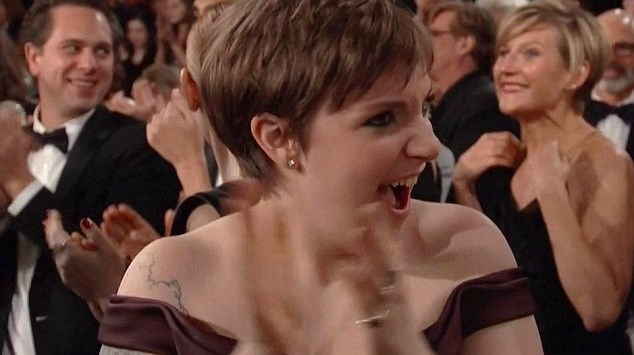 “I first pushed him away and just told him ‘No, please don’t do that,” and I forget, it’s been 21 years, Lisa, and I forget exactly what he was saying. It seems like he was making statements that would relate to ‘Did you not know why I was coming up here?’ and I told him at the time, I said, "I’m married, and I have other things going on in my life, and this is something that I’m not interested in…..

…Then he tries to kiss me again. And the second time he tries to kiss me he starts biting my lip (she cries). Just a minute... He starts to, um, bite on my top lip and I tried to pull away from him. (crying) And then he forces me down on the bed. And I just was very frightened, and I tried to get away from him and I told him ‘No,’ that I didn’t want this to happen (crying) but he wouldn’t listen to me.

…I told him ‘Please don’t.’ He was such a different person at that moment, he was just a vicious awful person.

…: It was a real panicky, panicky situation. I was even to the point where I was getting very noisy, you know, yelling to "Please stop." And that’s when he pressed down on my right shoulder and he would bite my lip…

…When everything was over with, he got up and straightened himself, and I was crying at the moment and he walks to the door, and calmly puts on his sunglasses. And before he goes out the door he says "You better get some ice on that." And he turned and went out the door.”

And now? So much for "we all have to ask hard questions" and grow up.

Now Lena Dunham, who says “these stories force them (men) to ask hard questions about their history with consent…” is literally standing up and cheering a man who has some hard questions to answer about a “history with consent.” Was she afraid that if she sat on her hands or walked out or tweeted a comment about rape her Hollywood career would end on the spot? No idea. But cheer she did.

As with Howard Kurtz, I have no idea what happened to Ms. Dunham back there in her college days. And I do know her publisher is backing away from her story and popping for legal fees for someone who believes they have been erroneously accused. But it is also abundantly clear, as Kurtz also says, that “Dunham, the darling of the liberal intelligentsia, has raised questions about her own credibility.” Exactly.

So too has Salon and writer McDonough taken a self-inflicted credibility hit.  Feminists or anti-rape activists who cheer on someone who is cheering on a man so graphically accused of rape are neither feminists nor ant-rape activists. Another word comes to mind.

That would be hypocrites.