Arrogance, Ignorance, and Race at CNN and PBS

Brian Stelter used to work for the New York Times. Apparently he doesn’t read it.

This curious fact came to light recently when Stelter, now the host of CNN’s obviously erroneously named Reliable Sources, invited PBS “science” correspondent Miles O’Brien on his show. The two zeroed in on this statement from Fox’s Andrea Tantaros: “I've said it before, I'll say it again -- in these countries, they do not believe in traditional medical care. So, someone could get off a flight and seek treatment from a witch doctor…”

This was more than enough to have Stelter and O’Brien foaming. The two proceeded to say:

BRIAN STELTER, CNN HOST: Miles, not much to say here but witch doctors?

MILES O'BRIEN, PBS SCIENCE REPORTER: Well, I mean, we could digress into what motivated that. And, perhaps, the racial component of all this, the arrogance, the first world versus third world --

O'BRIEN: -- statements and implications of just that, it's offensive on several levels. And it reflects, frankly, a level of ignorance which we should not allow in our media and in our discourse.

Got that? At one stroke Tantaros is tried and found guilty of racism, arrogance, ignorance and therefore “we should not allow” her in the media. The other day Bill O’Reilly and Bernard Goldberg shredded the two on The O’Reilly Factor. Doing a little something called “research.” Said O’Reilly and Goldberg: 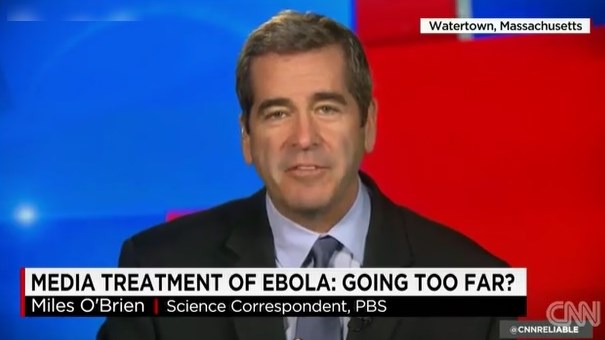 GOLDBERG: No, you're not wrong at all. They talked about ignorance. The ignorance is on the part of Brian Stelter and Miles O'Brien.

Here's what they left out on CNN -- a British Red Cross worker who was working with Ebola patients in Sierra Leone said this -- "Some Africans believe the disease is a punishment or a result of witchcraft. Some families believe that when their loved one goes into an ambulance, they will be given an injection to kill them."

So, if some Africans believe Ebola is the result of witchcraft, why is it a stretch to believe that some Africans may go to a witch doctor to get straightened out?

Here's what you're not allowed to say out loud and what you'll never hear from a liberal journalist at CNN or any other news organization -- "Many Africans," -- I have to whisper this, -- "many Africans in Liberia and Sierra Leone and places like that," yes, here it comes, "are backward people. They do believe in witch doctors."

But it's a lot easier -- they won't talk about that, the liberals, that makes them very uncomfortable. It's a lot easier to go after someone on Fox for using the term "witchcraft."

O'REILLY: Yes, we're all racists here. We know that. And we're all, you know, absolutely denigrating the third world.

GOLDBERG: And imply unfairly -- right, and imply unfairly that she's a racist. Let me just say this very briefly -- shame on Brian Stelter and Miles O'Brien. They have no idea how their liberalism affects and infects their journalism. Shame on them.

O'REILLY: Well, and then you saw Mr. O'Brien say it should not be permitted. Therefore, Andrea Tantaros is not to be permitted to say that.

All of this was, of course, dead on. But there was one more thing that O’Reilly and Goldberg did not mention. Mr. Stelter once upon a time was a reporter for The New York Times. The very New York Times that reported this story on July 27th of this year.  The story was headlined: "AFRICA: Fear of Ebola Breeds a Terror of Physicians."

The story reported in detail that African villagers believed Western physicians, specifically Doctors Without Borders and the Red Cross, were responsible for spreading Ebola. Which, in turn, reported the Times, meant that: “People appear to have more confidence in witch doctors.”

In other words? In other words, there is Mr. Stelter’s former paper - aka “the paper of record” that carries “all the news fit to print” - reporting months ago that Africans believe the problem they face in dealing with Ebola is, yes, the Red Cross and Doctors Without Borders. Said the Times:

“Now the fear of aid workers, principally from Doctors Without Borders and the Red Cross, is helping to spread the disease, health officials say, creating a secondary crisis.

Villagers flee at the sight of a Red Cross truck. When a Westerner passes, villagers cry out, “Ebola, Ebola!” and run away.”

Which in turn has led some Africans to turn to, again in the words of the Times, “witch doctors.” Precisely as Ms. Tantaros said.

So now the question. What in the world would cause Messrs. Stelter and O’Brien to make such an abysmally ignorant report on the subject of Ebola and witch doctors in Africa? When Mr. Stelter’s own former employer -- The New York Times no less -- reported exactly what Tantaros was saying months ago? The answers are exactly what the two tried to project onto Fox News and Tantaros. Ignorance, arrogance, and yes, racism.

It would be hard to give a better example of the paternalism with which liberals in America condescend to human beings who happen to be black - whether in Africa or America -than that snippet of conversation between liberals Stelter and O’Brien (not to mention that after totally misrepresenting the facts the two agreed that what was in reality the truth “we should not allow in our media and in our discourse.” Ahhh the urge to liberal totalitarianism surfaces.)

Recently there have been two media events in the headlines that, by chance, illustrate exactly the problem that Stelter and O’Brien personified the other day. The first was the dust up around the Jefferson County, Colorado school board’s decision to take the leftist revisionism of American history head on. The second was the PBS  airing of the Ken Burns documentary The Roosevelts, a look at the lives and careers of Theodore, Franklin and Eleanor.

What was left out of all the media coverage of the Jefferson County events and from the The Roosevelts documentary? Under the guise of confronting facts of history, for example, the College Board AP “Framework” for teaching history says this in it’s “Key Concepts” section about the period between 1800-1848:

“D. Many white Americans in the South asserted their regional identity through pride in the institution of slavery, insisting that the federal government should defend that institution.”

In another section the Framework says:

“B. Increasingly prominent racist and nativist theories, along with Supreme Court decisions such as Plessy v. Ferguson, were used to justify violence as well as local and national policies of discrimination and segregation.”

And so on. What’s missing? For some mysterious reason, the Framework,  credits “liberalism” and “Lyndon Johnson” for using “federal power to end racial discrimination…”. But there isn’t a peep in the entire Framework about the role of progressives and Democrats in supporting slavery, segregation, lynching or the Ku Klux Klan.  Not to mention that the alliance between racism and progressives was - and remains - the political force behind progressivism. Nor is this same fact - that FDR’s career in national politics and the passage of his New Deal came about as a direct result of support from racist progressives mentioned either. The Burns documentary, for example, spent much time lovingly recounting FDR’s creation of Warm Springs, Georgia as a facility to deal with polio patients. Never mentioned was that the facility was restricted to white patients only.

In other words, the liberals of the AP history College Board and Ken Burns have quite deliberately re-written history by conveniently writing out the tie between racism and progressivism. In the case of the College Board, this was done by deliberately leaving out of the Framework the disturbing if unfashionable and uncomfortable truth of racism to American high school students. Then presenting the white-washed (so to speak) version of the truth as “critical thinking” about the reality of American history. In the Burns case, a PBS documentary was used to hide the role of racism in electing FDR, the passage of his New Deal policies and the fact that FDR himself ran a whites-only segregated polio facility. PBS itself has a web site on the Burns series, which says of FDR and Warm Springs:

“In October, FDR travels to rural Georgia to bathe in the mineral waters at a worn down resort. It is here, holding on to the edge of the pool, that warm, buoyant water allows him to stand for the first time since 1921. FDR eventually purchases the resort and is present when the town is officially renamed Warm Springs.”

Warm Springs a “whites only” facility and run by the progressive President of the United States? Shhhsssssssh.

Which brings us back to Messrs Stelter and O’Brien’s comments the other day. With both men illustrating precisely that it is in fact liberalism itself that is tied tight as a tick to racism. Each man used their forum to condescend not only to a female host at Fox who told the colorblind, factual truth about Africans turning to witch doctors ( in the exact words of Stelter’s former employer The Times: “People appear to have more confidence in witch doctors.”) But in fact their remarks betrayed each man’s obsession with a liberalism which reflexively patronizes black human beings while accusing others who believe in a colorblind America of racism. (Note O’Reilly’s sarcastic aside to Goldberg: “Yes, we're all racists here. We know that. And we're all, you know, absolutely denigrating the third world.”)

In fact Stelter and O’Brien’s remarks denying that there are Africans who turn to witch doctors instead of Western medicine ironically echo the reality of that “whites only” policy at FDR’s Warm Springs. How? Because, yes, in fact, the racist view of the world once held that black people couldn’t get polio. Really. And as we know, black people in Africa couldn’t possibly be turning to witch doctors over the Red Cross and Doctors Without Borders - even though the New York Times reported this as fact.

Is this kind of thing shameful? Yes. Of course. But in fact, alas, it is typical. In this case it appears as the mix of racism that is at the core of the horrific history of American liberalism, dished out in patronizing form from CNN and PBS. While in other forms - the College Board AP standards and the Burns history of the Roosevelts?  The harsh truth of progressivism or liberalism and its longstanding ties to out-and-out racism is hidden altogether.

You can’t make it up. But Stelter and O’Brien can. The good thing is that Bill O’Reilly and Bernard Goldberg were right there to call them on it. O’Reilly, Goldberg and - oh yes - The New York Times.