Future broadcasts of The Rachel Maddow Show on MSNBC that include segments on Hillary Clinton's presidential campaign should come with a warning, something along the lines of -- keep a barfbag handy, at least if you're one of the few conservatives in our audience.

With the official announcement of Clinton's second bid for the presidency looming, Maddow on her show Friday night recounted Clinton's previous campaigns for public office and positively swooned while doing so.

Viewers who stumbled onto the segment while channel-surfing may have wondered if Maddow was rhapsodizing about Clinton or Wonder Woman.

Back in 1999 when Clinton decided to run for the U.S. Senate in New York, a state where she had never lived, she so "rattled" initial GOP opponent Rudy Giuliani, Maddow claimed, that his campaign never gained traction and he dropped out after being diagnosed with prostate cancer. Clinton then faced off against a little-known Republican congressman -- "and yeah, Hillary Clinton cleaned Rick Lazio's clock too," Maddow said.

Here's where Maddow really starts to shovel it --

Hillary Clinton won that Senate seat and as the junior senator from New York she served as a senator in much the same way that she had won the seat in the first place -- she spent a lot of time upstate and all over the state, rural areas, state fairs, county fairs, local parades, a hard-core attention to constituent services. When it came time for her re-election effort six years later, she didn't have the, you know, carpetbagger, out-of-stater thing going against her any more.

But by the time she was running again in 2006 it was clear that she was going to be running for president in 2008. They could have used that against her for her re-election effort. That turned out to be no problem though. I mean, look, this was the electoral map when she beat Rick Lazio when she won the seat in the first place in 2000. This was, whoa!, that was the electoral map when she won re-election in 2006. (Many more counties in New York colored Democrat blue), by more than 30 points.

Hillary Clinton is good at this -- she's really good at this. I mean, yes, she did lose the 2008 presidential primary to Barack Obama, barely. But it is still ahistorically inexplicable the way she became the first-ever woman elected to the United States Senate in New York state when she had never lived there a day in her life and she was running against the most famous New Yorker in the country. But she did it and she did it with small-scale events and shoe leather and paying attention to local media and surprising everybody by showing up over and over and over again in places that other candidates wouldn't bother. 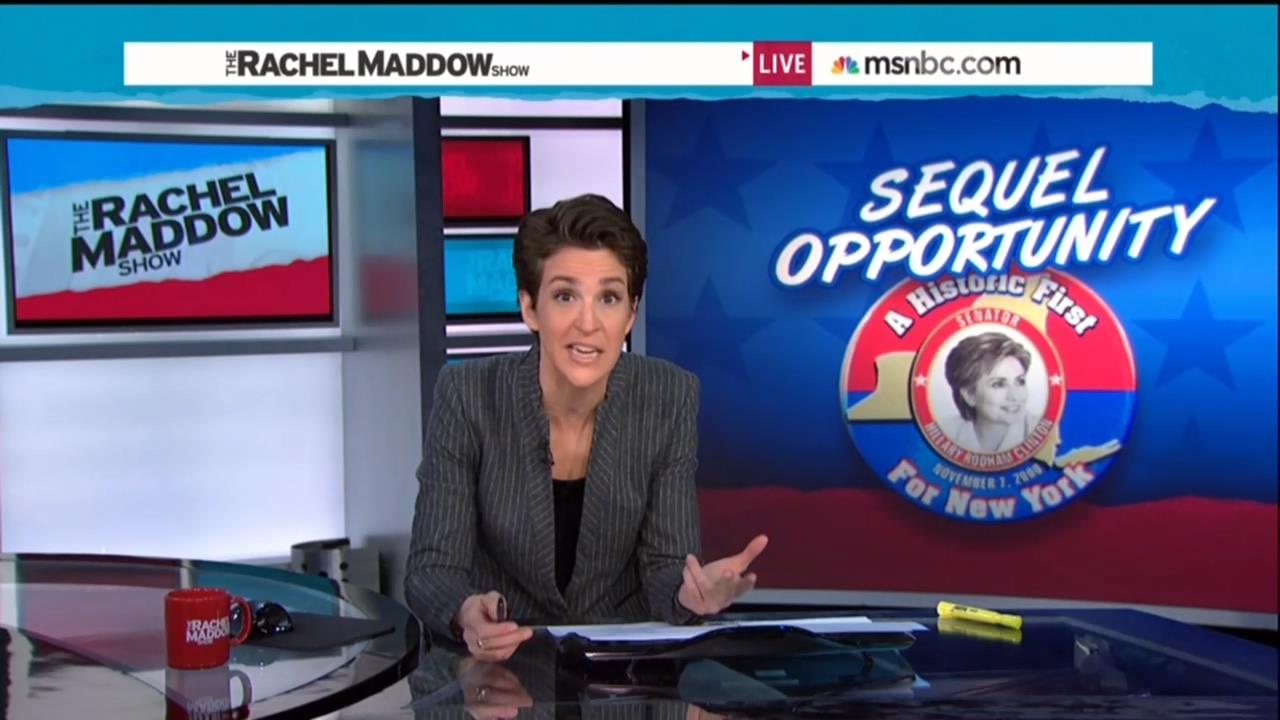 And she did it with her husband, president of the United States and most popular Democrat in the country, their party's top fundraiser by a country mile, virtually attached to her hip. Remember the Clintons saying in 1992 that it was a two for one deal, with him you got her too? They did the same thing in 2000 when she ran for the Senate, though Maddow is loathe to point this out.

A candidate running for U.S. Senate while closely related to the president -- where have we seen this before? Ted Kennedy in his first Senate campaign in Massachusetts, 1962, while brother JFK was in the White House. As with Clinton decades later, that powerful familial connection didn't hurt. Had his name been Edward Moore instead, Kennedy's opponent sneered, he wouldn't have a prayer. Same for the candidate named Hillary Rodham rather than Hillary Clinton.

And now this weekend, her campaign says that she will launch her second campaign for president of the United States but this time she's going to go back to that successful strategy that she used in 2000 to win that most unlikely Senate seat in New York. She's going to release a video online on Sunday that will serve as the official announcement. Apparently it's already been taped, it's already in the can. But once that video launches this weekend, once they hit send, it'll be off to small-scale events, rural areas, one-on-one meetings and very small-scale meetings with voters. ...

Once again, in case you've not been bludgeoned enough -- small scale. No point exposing Nurse Ratched to any more patients than necessary.

No soaring rallies, no big rhetoric, no large rooms. Just showing up, especially in small town places where people do not expect her to be outworking everybody else. (Take that, Lincoln Chaffee!). Will it work this time?

Prediction -- if Clinton is the Dems' nominee, she wins New York (gasp!). But at some point before November 2016, she may have to pitch to groups bigger than bridge foursomes.

As if Maddow's cheerleading wasn't amusing enough, it was promptly undercut by her next guest, Meet the Press host Chuck Todd. Yes, Todd agreed, Clinton will try to replicate her 2000 Senate campaign on a national scale, but she's not quite the candidate extraordinaire described earlier by Maddow --

More along the same lines on Sunday's This Week from host and former Bill Clinton adviser/apologist George Stephanopoulos -- Hillary is "not the natural political athlete her husband is," he pointed out, given that she's prone to "clunky moments."

As if on cue, Clinton '16 adviser Guy Cecil appeared on Maddow's show last night to elaborate on her strategy of focusing on "everyday Americans" (not to be confused with the comatose?). After her interview with Cecil, Maddow added this --

I will say, as a member of the press who talks about politics all the time, it has never been very easy to get folks from the Clinton world to talk with us here on MSNBC, so I'm very appreciative that Mr. Cecil was here.

All it takes is unabashed Hillary fandom fobbed off as reporting by a "member of the press" -- and the Clinton hacks will line up to schmooze with Maddow.