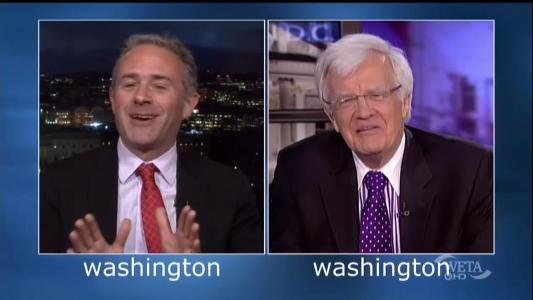 On Tuesday’s Charlie Rose show the host and his panel were not shy with the superlatives as they celebrated Barack Obama’s “best week.” Rose began the segment by listing Obama’s victories on the Pacific Rim Trade deal, ObamaCare and same-sex marriage as he hailed: “A lot of other people saying this is the man that we thought we were getting in 2008.”

Rose added there was “something special about this week” before handing the topic off to his guests which included the Financial Times’ Ed Luce, who was brought on to elaborate on his column that hailed: “Last week brought to the fore both the majesty and limits of the U.S. presidency. It would not have been the same on anyone else’s watch.”

Bloomberg’s Al Hunt also joined in on the celebration as he cheered that Obama had achieved his goal of becoming a “transformative president, like Reagan.” Hunt added that it wasn’t a question of whether or not Obama would be seen as a good president but rather “history will determine whether he’s a great or near great president.”

The following are the relevant exchanges as they were aired on the June 29 edition of PBS’s Charlie Rose show:

CHARLIE ROSE: We turn now to what many considered to be perhaps the best week of President Obama’s second term. The week began with a victory on Pacific Rim Trade with the Senate giving Obama the green light to move forward in negotiations with the 11 other countries. On Thursday, the Supreme Court upheld the Affordable Care Act for the second time in three years.

ROSE: The next day, the Court delivered a historic decision for gay  rights ruling five to four that the Constitution requires that same sex couples be allowed to marry no matter where they live.

ROSE: And the week culminated with the President’s tearing eulogy for the slain pastor and parishioners of the Emanuel African Methodist Episcopal Church in Charleston, South Carolina.

ROSE: Joining me now from Washington is Ed Luce of the Financial Times. Today, he wrote, “Last week brought to the fore both the majesty and limits of the U.S. presidency. It would not have been the same on anyone else’s watch.” Also in Washington, Al Hunt of Bloomberg View. I am pleased to have both of them here.
...
ROSE: Bloomberg’s Francis Wilkinson dubbed it the week, “The 21st Century Really Began in America.” We are saying a lot of things here. Presidential renaissance - a term that Ed used. A lot of other people saying this is the man that we thought we were getting in 2008. It has been an uneven presidency. But there did see something special, seem something special about this week. You’ve seen a lot of presidents, Al. Tell me about this week in the context of presidents that have come and in context of this president.

AL HUNT, BLOOMBERG VIEW: Well, I agree with Ed’s column, Charlie....And in going to Ed’s point, it was a fabulous week. But what Barack Obama has really achieved is that goal he enunciated in an interview with a Reno on Nevada Newspaper seven and a half years ago, to be a transformative president, like Reagan, unlike Bill Clinton. And when you look at the Affordable Health Care Act, the stimulus, a potential deal with Iran, the Transpacific Trade Pact, some immigration actions, history will determine whether he’s a great or near great president, but he is clearly a transformative president.
...
ROSE: What impact will this week have on the 2016 election?

HUNT: Barack Obama standing and his popularity is going to affect the Democratic nominee, presumably Hilary Clinton. And if Barack Obama had to pick a number is it 50 percent of the polls, that’s a lot better for her than 42 percent. It really does translate that way. And I think this week is going to make his standing in all likelihood much more significant than it would have otherwise.

Charlie, a year and a half or 17 months is a lifetime all sorts of things can occur. But I think the sense that this is really a significant president who’s done significant things, most of which, I think, the least that we look at this past week are going to be rather popular with the electorate that he’s going to be an asset to a Hilary Clinton in 2016 much as Reagan was to George H.W. Bush in 1988.
...
HUNT: You know, he gave that initial interview and he mentioned Reagan in his book and what he said was not that he agrees with Reagan’s policies, but Reagan changed things. Reagan changed the America. Reagan made a difference. Reagan established a regular order, if you will. And what attracted a lot of attention, back January of ‘08, was he said Clinton did not. And Bill Clinton for all of his great political skills always lamented the fact we didn’t have a great crisis to deal with. And Obama has had crises to deal with. And I think he has risen to that occasion. And I’m not sure how history’s going to judge him. We still are not sure on history’s going to judge Ronald Reagan, but he is a very significant president.