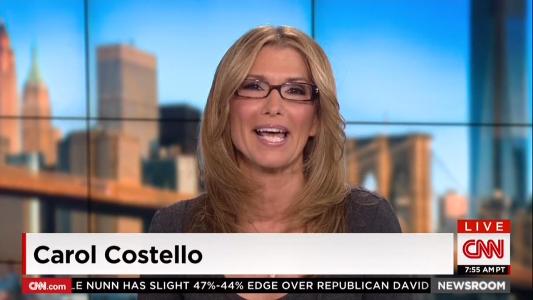 On Thursday, CNN’s Carol Costello apologized to the Palin family, via a statement sent to Politico and on her Twitter feed, but so far she has refused to do what even former MSNBC host Martin Bashir did, and offer an on-air apology.

Like Costello, Bashir also got into trouble for viciously attacking a Palin and eventually lost his MSNBC post because of it. But at least he made an on-air apology, something Costello has yet to do. In fact when asked, by Breitbart.com, if Costello would issue an on-camera apology CNN responded: “No, she will not.”

Well, Costello followed up on that CNN promise as Friday’s edition of Newsroom came and went without the anchor uttering a single word about the firestorm caused by her laughing at Bristol Palin’s assault.

Conservative talk show host Mark Levin, on his Thursday show, made the salient point about why Costello also needs to say she is sorry on-air:

MARK LEVIN: This Carol Costello has since issued an apology. “Over the past few days I’ve been roundly criticized for joking about a brawl involving the Palin family. In retrospect I deserve such criticism and would like to apologize.” She was asked if she would do it on the air by Breitbart. Her spokes-idiot said no, she will not apologize on the air. So while, you know, hundreds and hundreds of people watching CNN heard her do this, the fact is she just put out a statement and wouldn’t apologize on the air.

For an example of what Costello could have done, here is what Bashir did after he got into trouble for his disgusting remarks about Sarah Palin: