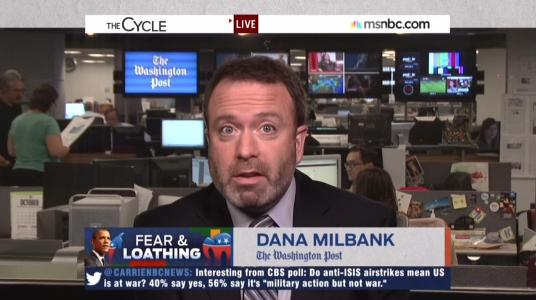 On Friday, the Washington Post’s Dana Milbank implied something truly dastardly and unpatriotic about Republicans -- that they wouldn’t mind if the President of the United States was violently removed from office due to inadequate Secret Service protection.

During a discussion about Republicans using fear to motivate voters in the midterms, on MSNBC’s The Cycle, Milbank sneered that Republicans were “even making a campaign issue of the Secret Service saying, ‘things are so bad that even the President of the United States -- the President of the United States we would like to remove from office by the way -- is not being adequately protected by the Secret Service.’”

The following is a transcript of the relevant exchange as it was aired on the October 10 edition of MSNBC’s The Cycle:

TOURE: Dana, I want to go back to that New York Times article that Susan referenced which talks about how the GOP is running on fear and loathing. And of course, fear is the easiest thing to run on. It gets into the lizard brain and it makes some people say, “I must go out and vote” and it makes other people say “Why bother, it doesn’t matter?” So it helps depress turnout, which is good for the GOP and contributes to this “meh” midterm, as Pew is calling it. But ultimately, I think it reveals and exposes that the GOP in general really has nothing but “the world is horrible” to say to us.

DANA MILBANK, THE WASHINGTON POST: Right. Well, you know, fear does work. Had I not agreed in advance to come on the show today, I might still be in bed given all the ebola that’s out there in my neighborhood.

So, but of course, you know fear is sort of the last refuge of a scoundrel. Remember when this election was going to be about Obamacare? Remember when it was going to be about jobs? Remember when it was going to be about all those scandals in the Obama administration? They are gone now. And as my colleagues Karen Tumulty and Robert Costa pointed out, there are some surprises popping up that put the very clear Republican claims on the Senate in jeopardy now in South Dakota, in Kentucky, which we were just talking about, in Georgia, in some other places. So, I think what you do, when all else fails is, you frighten people. And that’s pretty easy to do right now because most people in America think the country’s on the wrong track. And they’re worried. And so what do you when people are worried? You tell them to start screaming.

ABBY HUNTSMAN: Right. And Republicans are jumping on that bandwagon. Let’s pull up these most recent Pew numbers that shows a majority believe we are at risk of another terrorist attack. And there’s little confidence in the government -- that the government, rather, can prevent a major ebola outbreak here in the U.S. To your point, there’s this crisis of confidence and the Republican Party sees where majority of Americans are at. And The New York times wrote about this saying, look, the GOP really has a simple job. The message is simple. You basically scare Americans by saying, quote, “the Democratic Party runs a government that is so fundamentally broken, it cannot offer its people the most basic protection from harm.” I mean Dana, to your point of, you know it may not be about policy, about some of the things that I wish Republicans were running on, but this could be very, very effective.

MILBANK: Sure. I mean, and they’re even making a campaign issue of the Secret Service saying, “things are so bad that even the President of the United States -- the President of the United States we would like to remove from office -- by the way is not being adequately protected by the Secret Service.” Look, I mean, you know, we -- we can -- some of us can remember back to, you know, Max Cleland in 2002, the, you know, morphing Democrats into Osama bin Laden. Scare really works. The problem is it sort of works in the short term if you have nothing in your own quiver to say. “Alright here is what my alternative is.” So you know maybe it will get the Republicans across the finish line. And then what do they do in 2016 as things continue to look up?