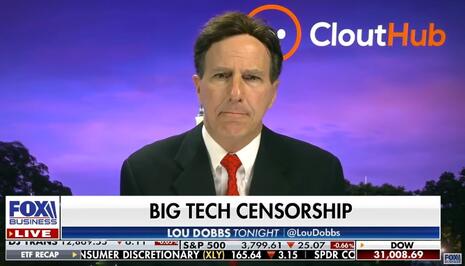 Big Tech corporations have a notorious history of kicking free speech alternatives off their platforms, but CloutHub chose to strike first and took action before it faced the same fate as Parler.

“‘Crucially, CloutHub is now server autonomous – meaning that our platform does not depend on any individual hosting service,’” Brain said. The platform’s latest update came in “response to a growing demand for secure alternatives to Facebook, Twitter, and Instagram,” according to a recent press release.

Brain explained the benefit of his company’s newfound autonomous status in an exclusive comment to MRC Free Speech America. “[T]his update includes protections that allows us to operate without threat of being shut down by big tech,” he said. His concern is not unfounded after Amazon Web Services (AWS) abruptly stopped hosting the Parler app in January.

CloutHub also experienced conflict with its former video web hosting service IBM earlier in the year. Brain said at the time that “IBM chose not to fulfill its contractual obligation with CloutHub” when the company allegedly removed 14 CloutHub video channels without warning or explanation, according to EIN Presswire. “In its contract with our company, IBM agreed not to remove or censor any of our content without issuing a warning or giving us sufficient time to remedy the problem.”

The free speech platform’s latest update will also make the platform “fully web-based” and accessible “on any mobile browser in addition to downloading the official app from a digital marketplace,” CloutHub’s press release said. The change could also potentially prevent CloutHub from overreliance on app stores choosing to carry the app, another challenge Parler faced in January.

Brain’s active response mirrors the criticisms he has spoken against Big Tech several times prior. The Tennessee Star most recently reported that Brain called Big Tech “‘beyond the point of redemption’” when commenting on former President Donald Trump’s Big Tech lawsuit announcement. “His lawsuit is based on the infringement of his fundamental free speech rights that powerful companies such as Facebook and Twitter imposed based on their own political bias; a bias that has no place with such important keepers of our national public square online,” Brain said, according to The Tennessee Star.